How much is "enough" with a defensive handgun? 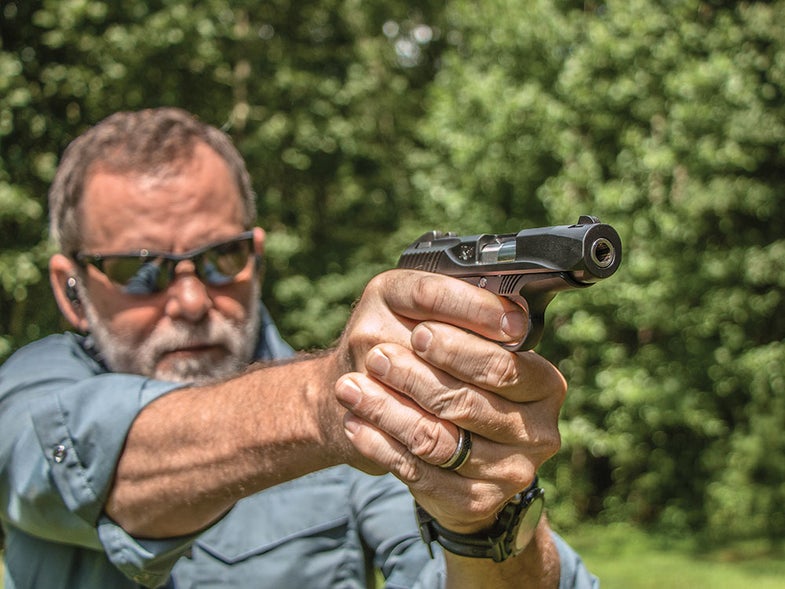 Opinions on terminal ballistics for defensive handguns are as varied as sentiments toward Britney Spears. The reality is that the complexity of the issue is much deeper than what meets the eye. Maybe the best way to approach the subject is to look at the ways in which a defensive handgun can neutralize a threat, and the necessary ballistics required in each instance.

BRANDISHING A GUN: The mere introduction of a handgun stops most attacks. Point a handgun at a bad guy and he stops doing bad things. I learned this as a cop, and it works just as well for citizens. Humans have an intense fear of getting shot.
WHAT’S REQUIRED: Have a gun.

MAKING A HIT: If pointing a gun is not enough, your next best hope is to shoot. Fortunately, statistics show lots of bad guys who get shot tend to stop being bad, regardless of the type gun or ammo they’re shot with. Humans don’t like extra holes in their body.
WHAT’S REQUIRED: Just about any gun-ammo combination will do.

INFLICTING PAIN: Pain compliance is an excellent method for controlling disorderly humans. Logic then dictates that cartridge-bullet combinations capable of inflicting the most pain are best. But pain may not be enough if your attacker is on a crack high.
WHAT’S REQUIRED: Wide-expanding, high-velocity, shallow-penetrating, and fragmenting ammunition (e.g., 45 Auto Glaser Safety Slug).

HITTING THE CNS: A hit in the central nervous system—the cranial vault—will generally cause immediate collapse. It’s like flipping a light switch. However, the bullet must have enough force to breach the skull and significantly damage the brain.
WHAT’S REQUIRED: Moderate- to high-velocity hollowpoints (900 fps or more MV), 9mm or larger.

DROPPING THE THREATt: Bullets impacting the spine or pelvic girdle can cause an instant collapse too, but they’ll need sufficient force. Understand, however, that causing collapse in this manner may not end the fight. Your attacker might have a gun so he’ll still be able to return fire.
WHAT’S REQUIRED: Deep-penetrating, heavy-for-caliber bullets (e.g., 124-gr. 9mm, 165-gr. .40 S&W, 200-gr. .45 ACP)

CAUSING BLOOD LOSS: The only foolproof way to make a goblin cease a murderous attack is to render him unconscious or lifeless. Both can be accomplished through organ trauma and/or blood loss. But in most instances, this takes time—something you have little of. The upper torso offers the largest and best target. It also contains the vital organs. With adequate terminal performance, collapse, unconsciousness, and even death can occur somewhere between right now and 30 seconds. WHAT’S REQUIRED: Bullets that penetrate at least a foot and expand at least 1.5 times their original diameter (e.g., Remington Golden Saber, Speer Gold Dot).

The FBI believes expanding bullets are better. They also specify a minimum penetration of 12 inches to stop a threat. This is a good benchmark, and you’ll generally need a 9mm Luger, .40 S&W, .45 Auto, or magnum revolver to achieve that. Here’s where things get complicated. The more a bullet expands, the more tissue it will damage, and the more pain it will inflict. However, the more a bullet expands, the less it will penetrate, meaning it may not damage vital organs. Balance is key.

The great gun writer Finn Aagaard once said, “Without sufficient penetration, nothing else matters.” So, even though pointing a gun, shooting a bad guy, or causing pain might be enough to save your life, in the event it’s not, you need bullets that will expand, cause violent tissue damage, and penetrate deep enough to reach vital organs, the spine, or the pelvis. In other words, hope for the best, prepare for the worst.

The conundrum you face is balancing the size of your handgun—something you’ll carry every day—with adequate terminal performance. Fortunately, with modern ammo, the 9mm, .40 S&W, and .45 Auto all deliver similar results. A magnum revolver is even better. So the real question is: Are you comfortable with a .380 or .38 that might scare a bad guy away, or should you opt for, as Robert Ruark said about hunting buffalo, “enough gun”?

With all but mouse gun cartridges (.380 and smaller), adequate ammunition is not hard to find. Though they vary slightly in performance, Gold Dot, Golden Saber, Critical Duty, TAC-XP, and similar munitions will perform to the FBI specification out of a 9mm, .40 S&W, or .45. With the itty-bitty cartridges, select loads that fit Finn’s motto and drive the deepest, regardless of expansion. With magnum revolvers, your ammo choice is less critical.

You might shoot a bad guy in the big toe with a .22 and see him scream and run away. If he doesn’t, and a .22 is all you have, you’ve got a problem—a problem that might ultimately be sorted out by a police detective and your life insurance agent.