How To Shoot A Double-Action Revolver

Some shooters say the lengthy trigger pull on a double-­action revolver is slow and cumbersome. Don’t believe them. A skilled... 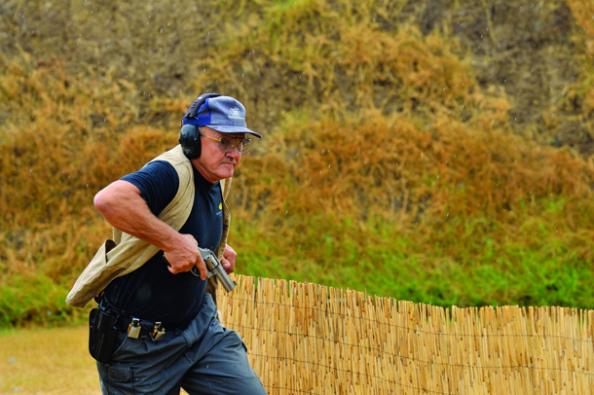 Some shooters say the lengthy trigger pull on a double-­action revolver is slow and cumbersome. Don’t believe them. A skilled DA revolver shooter can face three Action Pistol targets at 7 yards, draw from the holster, and drill two perfect hits on each in less than 3.5 seconds. Elite masters do it a second quicker than that. This rivals, or even beats, the time of many semi-auto shooters. Those blistering times, however, are only possible when using the “live trigger” technique.

Live vs. Dead
A live trigger means that even once the first shot is fired, the trigger doesn’t stop moving. It is either moving forward to reset or coming back to fire another round immediately. This includes when the shooter is transitioning between targets. The trigger keeps moving. This is in direct contrast to the “dead trigger” technique, wherein the shooter allows the trigger to go forward to reset, pauses, confirms sights on the target, and then begins the lengthy double-action pull again. The speed advantage with the live technique is significant on targets inside 15 yards. On this writer’s range, engaging a single target at 7 yards using the dead trigger technique produced split times averaging 1.05 seconds for the second shot. A live trigger reduced split times to .35 seconds. Two targets spaced 6 feet apart, with one round fired on each, produced dead trigger splits of 1.20 seconds, and live trigger splits of .55 seconds, with perfect hits for each. Split times like that will make a huge difference in a match score.

Timing Is Critical
The live trigger technique requires a strong grip on the revolver, an intense focus of the front sight, and a practiced sense of timing. Begin by dry-firing an empty gun. The objective is to condition the trigger finger to keep moving and not pause on the forward reset. Bring the gun to a single target and trigger six dry shots as rapidly as you can keep the front sight on the target. Maintain intense front-sight focus. When you’re comfortable with this, set up three targets and fire two dry shots on each, keeping the trigger moving during transitions. This will help develop the timing needed to finish the trigger pull and break the shot as the sights reach the next target.

Go Hot
Shift to live fire with the well-known Bill Drill. Set a single target 7 yards away and fire six rounds as rapidly as you can while keeping the front sight in focus. Recoil enters the picture here, but the act of pulling the trigger as the gun rises in recoil helps bring the sights back down on target. Add three targets for transition drills, and don’t be discouraged if shots initially break early. Timing and rhythm need to be learned through repetition. It takes practice. But it’s worth it when you beat a bunch of semi-auto shooters at your next match and hear them say, “He did that with a revolver?!”