Lanark, Ontario, s_ent us this account of his favorite gun. To share your own, email us at myfavoritegun@outdoorlife.com, and it... 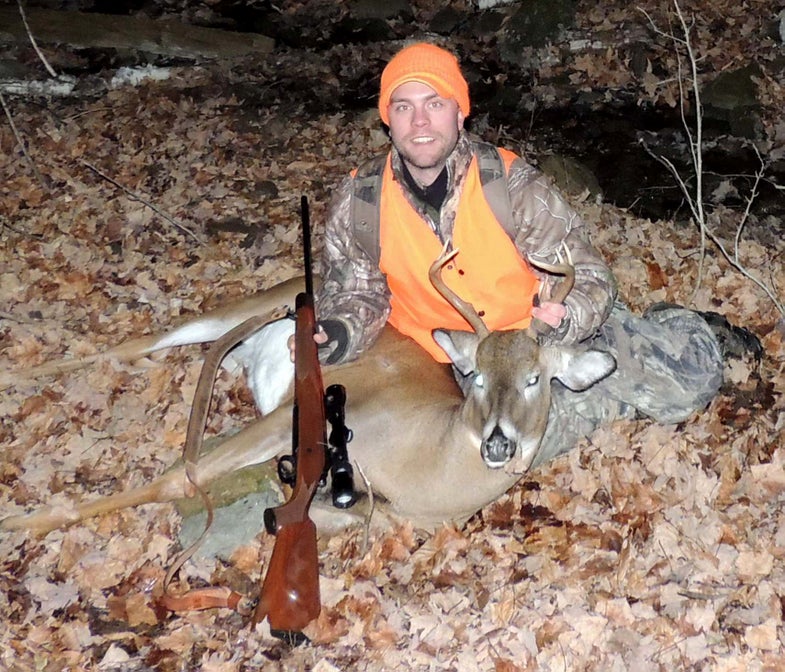 Lanark, Ontario, s_ent us this account of his favorite gun. To share your own, email us at myfavoritegun@outdoorlife.com, and it could be published in our June/July 2016 issue. We want to know the story of your favorite gun, and what makes it special to you. And, of course, we want to see a nice picture of it._

My favorite gun is one that was passed down to me from my grandfather, who instilled a passion and love for the outdoors in me from a very early age. Every time I take this old rifle out of the cabinet, I can’t help but reflect on the times spent with him afield and on the water, and the memories we made together.

After taking his son-in-law’s Remington Model 700 BDL .308 on a moose hunt to Lake of the Woods, my grandfather knew he had to trade his tired 7600 Pump .308 in for something a little better suited for moose. But Papa also wanted a rifle that would do the job for whitetails as well.

He loved how my dad’s rifle handled and that it could hammer half-inch groups out to 100 yards. So Papa purchased his own 700 from a friend in Atikokan, Ontario, who owned a fishing lodge and outdoor goods store. Rather than going with the BDL version of the 700 that my dad has, Papa upped the ante and purchased a Model 700 Mountain Rifle, mainly because he always loved the west and the mountains. The rifle is chambered in the venerable .30/06 Springfield and topped with a Bushnell Trophy 2×7—the glass that still sits on top of the rifle today.

One November night when I was about 12, we got back in from deer hunting. Papa told me when he was all through with hunting, the “Mountain Rifle” would be mine. Little did I know that Papa would never get to call it quits in the deer woods on his own accord. A couple years after that night, he passed after suffering a massive heart attack.

I’ve carried the “Mountain Rifle” into the woods with me every fall since Papa’s passing. It’s going on 15 years now, and I’ve since taken numerous deer, a moose, a wolf, and a couple coyotes. The stock is a little banged up from all of the adventures, but it’s still got pinpoint accuracy and works flawlessly. Almost all of the game I’ve harvested with it were one shot kills. I feel like Papa is up there watching over me every time I take his gun into the field, and I hope that one day I can pass the legacy of the “Mountain Rifle” on to the next generation.