September’s early honker seasons are intended to curb the abomination known as “nuisance” geese that have proliferated to the point... 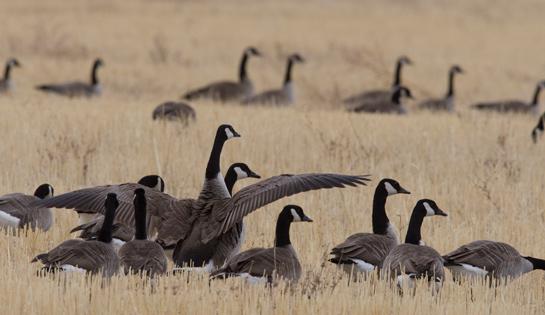 September’s early honker seasons are intended to curb the abomination known as “nuisance” geese that have proliferated to the point of polluting parks, golf courses, and other public areas. Hunters’ role in these seasons isn’t to conserve–it’s to eradicate. That is the point of the hunt’s timing–to remove as many of these slumming honkers as possible.

For hardcore waterfowlers, this early season is a tune-up for migratory geese that drop in later in the fall. But don’t think of these resident birds as pushovers. They’re insidiously smart, adaptable, and extremely sensitive to hunting pressure. You have to approach your offensive with the cold-hearted perspective of a military strategist. Here are the stratagems of your battle plan.

Scout and Pattern
Unlike migratory geese that hopscotch southward, hitting an area for a few days or weeks before moving on, residents have an intimate, year-round relationship with the land. They know all the food and water sources and when to hit them, and they know when something is wrong with a particular area. That can make them tough to fool but easy to pattern.

“In the early season, you have to be exactly where they’ve been going for a week,” says Cory Dukehart, a guide on Maryland’s Eastern Shore. “You have to identify specific feeding fields and roosting ponds. You want to get in the very middle of the ‘X’ that they’re using consistently.”

“Plan on hunting consistently, and plan on hunting multiple areas. The nice thing about layout blinds and small decoy rigs used in the early season is that you can pick up and run from spot to spot and switch easily from morning to evening,” says John Vaca, pro-staff manager for Final Approach, the waterfowl gear company. “You’ve got to get in, hit them hard, and get out, or else you’ll burn through that field. Resident geese figure it out real quick.”

Plan to have as many as 10 to a dozen spots where you can hunt on any given day, depending on the wind, hunting pressure, and seasonal farming practices.

Downsize the Decoys
Flocks of resident geese rarely exceed more than a few dozen birds, and when they’re on the ground, they’re arranged in family clusters of three or four.

“It all comes back to scouting,” says Dukehart. “Mimic what you’re seeing and how many birds you’re seeing, but nine times out of 10, small family groups are the key regardless of how many there are in a flock.”

Restrained Calling
Early-season birds have definitive travel corridors and locations in mind. They don’t need overexuberant calling to persuade them to land; slow, relaxed, low-end honks, clucks, and moans will do it.

“Read and react to what they’re doing. Watch that lead bird. If you’re getting some type of reaction out of it, keep making that sound,” says Dukehart.

Identify the Headquarters
Farm ponds and lakes are refuges, safety zones where resident geese can avoid predators and cool off in scorching temperatures.

Think of these water sources as your enemy’s headquarters. If you can identify these roosts, you can easily find the multiple fields where they’ll fly to feed in the mornings and evenings.

Use the headquarters to your advantage as long as you can, hunting the fields around that central water source. Because once you storm the roost pond, the fields won’t be nearly as productive.

Ethics of Hunting the Water
Discovering the birds’ water source gives you the ultimate ambush point for a grand-finale hunt after blowing them out of the fields.

“It’s a lot easier to hunt the roost pond [than fields]. What you’re trying to do in the early season is eradicate the population, versus the regular season where you want to conserve them,” says Vaca. “A feeding area is only going to last you so long before they leave it. When you start to get diminishing returns, that’s when you have to make the decision about whether to find an entirely different area or shoot the water holes they’re using.”

The Final Assault
Once you have hammered flocks in the fields, prepare to invade the headquarters to finish them off on the water, where they feel safe. Just be certain you’re ready to end your pursuit of these resident birds.

“Shooting the roost pond is a quick way to move birds out of an area,” says Dukehart. “If you shoot a field a few times, they’ll still use the same roost pond but change feeding fields. If you shoot the roost they’re probably going to leave.”

If there are any survivors, that is.