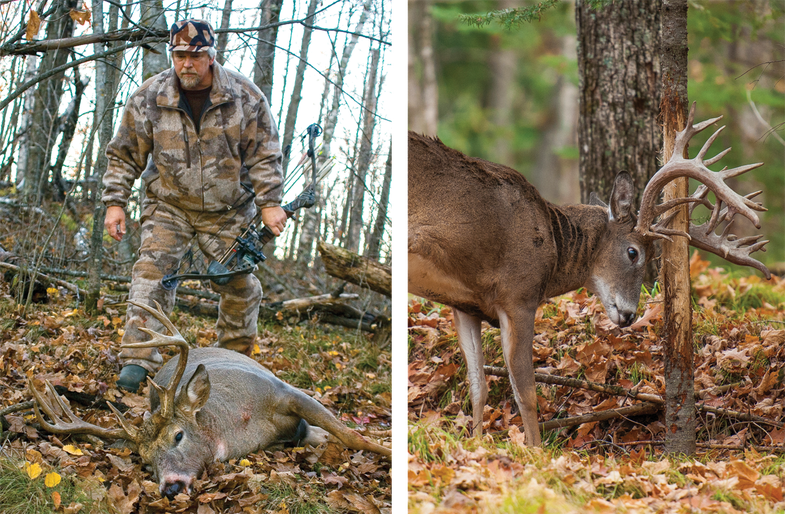 At age 46, northern Wisconsin’s Mike Noskoviak has been trapping coyotes, bobcats, coons, minks, and beavers for as long as he’s been a big-woods hunting guide—25 years. And if you’re not sure how those things are connected, understand that such a dual-pronged skill set is a very good thing.

Few people know more about game movement than successful trappers, and Noskoviak, who specializes in bowhunting for big-woods deer, would certainly agree. In fact, the laconic woodsman draws many parallels between the two challenging pursuits.

Wisconsin may be best known for churning out scads of record-book deer, courtesy of its fertile farmland—­especially those tracts located in its famed southwest corner. (Ever heard of Buffalo County?) In stark contrast is agriculture-starved Ashland County, hundreds of miles away, where Noskoviak’s Superior Guides and Outfitters operates. It is here, near the state’s northern tip, where the camp regularly chalks up heavy-beamed bucks with racks stained a rich chocolate from rubbing local spruce and pines.

1. Locate River Monsters
“The very best thing to learn is the location of all the feeder creeks and ravines that run through a given area,” Noskoviak says. “Those are deer travel corridors. Look for the biggest river and then find where the major tributaries connect. Big-woods hunting is very much like trapping—all of the area’s critters use the same basic travel corridors, just on different trails.”

2. Find Evergreen Hotspots
“A lot of the scrape lines are in the same areas year after year—and for good reason,” Noskoviak says. “It’s likely that they’re in the travel corridors and probably intersect doe bedding areas. So lots of different bucks will hit the same scrapes.”

3. Build a Better Buck Trap
Much like many whitetail outfitters operating in the big-woods of Canada, Noskoviak depends mostly on baited treestand sets. Adhering to the state’s strict baiting rules means there’s never much bait (corn or apples) near each stand site. To avoid turning bucks nocturnal, he typically opens the bait sites just 7 to 10 days before the rut begins in late October.

“Soon after, bucks will scrape and rub around the area and start scent-checking for does,” Noskoviak says. “Usually within six days, I’ll have a big one in there. I’ve done that forever, and the results are consistent as long as you stay out of the area as much as possible. You could take a big buck here every year just by hunting the hottest scrape lines, but that kind of hunting might take two or three weeks. I’ve got to get my clients on big deer in six days.”

4. What About Food Plots?
“They work well in the big woods,” Noskoviak admits. “But the problem is, so many deer come into them that instead of being able to put three or four hunters in an area, you can usually put just one. Other nearby baits go dead. That doesn’t help me at all. If I was just one person hunting, a food plot would be great because in the big woods, it draws deer from several miles. But what we’ve found is you’re only going to have one good spot, so there’s room for just one hunter. Also, deer up here just don’t like openings—not even pipelines. Big-woods deer are used to living in the shadows and thick brush.”

5. Get Into Monsters
Why outfit in the big woods? The reasons are many, Noskoviak says.

“I have the best spot in [a four-county area] up here, hands down. It’s all natural whitetail habitat. It’s where bucks grow old. Those farm deer? They know when the school bus comes, they know when Joe Blow leaves for work. Up here, the deer move more naturally, and I like that.”

6. Face the Big-Woods Challenge
“Access is one of our biggest challenges—we’ve got to keep trails to good stands open,” Noskoviak says. “We’re using chain saws a lot—we’ve got lots of blowdowns, and lots of low swampy areas. Over the years we’ve probably had to build 150 riprap bridges, using available downed timber and pole barn nails. Most stands require a 4- to 5-mile ATV ride.

7. Set a Trap
Noskoviak’s most successful clients are the ones who listen best. Hunt with him and you’ll be expected to pull an all-day, dark-to-dark vigil. Rules on stand include never getting down to scout around, and avoiding use of any type of attractant scent (Noskoviak believes even occasional use spooks mature bucks). Clients are expected to bring a urine bottle, and are instructed to defecate a full half mile from the stand.

“Once an area is contaminated, nothing will be coming in for the next few days. If you’ve got a good spot, stay in your stand. I see it all the time: After a few days a client will want me to move him, and the next day a new hunter in that same stand kills a big buck.You’ve got to be patient.

“Also, a lot of stands are set up where I can drive right to the base of the tree and have clients step right onto the stand ladder,” he says. “I don’t even want them stepping on the ground. When I set my bow stands, the sets are perfect, but instead of putting a trap there, we’re putting a hunter 20 feet up a tree. When you have a really good hunter, you have a really good trap. When you have a bad hunter, it’s like trying to catch something in an old rusty trap.”