A Drive Hunt for Bulgarian Boars

Outdoor Life editor Andrew McKean traveled to Eastern Europe last month to participate in a classic hunt of the region:... 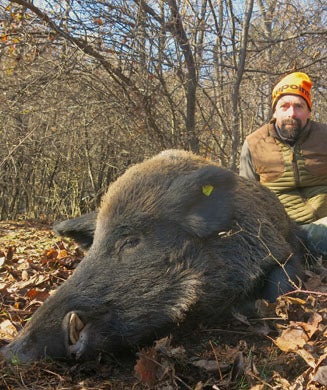 Outdoor Life editor Andrew McKean traveled to Eastern Europe last month to participate in a classic hunt of the region: a traditional driven hunt for wild boar. Come along with him to the ancient oaks near the Black Sea and see what else he encountered.

The hunt would be staged out of this lodge, Byalka, near the border with both Greece and Turkey, about two hours east of Bulgaria’s capital city, Sofia. The property was once a dacha of the former socialist government. Now, it’s the center of thousands of hectares of woodlands and fields that hold boar, red stag, roe deer, fallow deer, and mouflon sheep.

And the hunting license of Christoffer Soderberg of Aimpoint. The hunting party is comprised of about two dozen of us, writers from Spain, France, Italy, Germany, Russia, the U.S., and every Scandinavian country. The first species on our dance card: wild boar.

Sponsors of the trip include Aimpoint, Norma ammunition, Peltor (maker of a high-end noise-canceling headphone company based in Sweden), and Sauer, the German firearms manufacturer. Our rigs for the week: Sauer 303 semi-auto rifles chambered in .308 Win. and topped with Aimpoint’s Micro H-1 red-dot sights. This combination is hard to beat for driven hunts, in which shooting can be fast, either in close quarters or at distances out to 200 yards, and at moving targets. It’s pretty rare for animals that are driven out of cover by hounds and beaters to wait around for a follow-up shot, so the quick-pointing, fast-cycling 5-shot Sauers are put to good use.

The dog patrol. These are just a few of the beaters, and their hounds on the way to begin the first day’s beat.

My first stand of the day. And I do mean “stand.” Our group is split in half on this first day, and placed around the perimeter of large fields. We stand near whatever cover we can find–in my case, beneath this mulberry tree–while dogs and their handlers beat the brush. I assumed that a driven hunt would send waves of animals my way, but I stand here for four hours on a bone-chilling morning and see only two fallow deer.

The landscape here is stunning. We’re hunting a series of high, wooded ridges that drop into tight vales, but beyond our hunting area, the hills step up to real mountains that form the border between Bulgaria and Greece. The woods are populated mainly with a variety of European red oak, but a tree very much like our sycamore grows large in the sheltered valleys and I spotted pear trees, wild plums, and thick, brambly blackberry and raspberry.

Midway through our first morning, we switch stands, walking to the opposite end of a large pasture to cover a deep, brushy creek drainage. I stand beneath an oak tree for maybe two hours before I see movement to my right. It’s a boar, and I recognize the physique of a mature specimen–burly chest that tapers to a slim rump–and the flash of tusks. I drop him at 45 yards with a 165-grain Oryx bullet. He’s a very, very good boar, with tusks that may break the 20-centimeter mark.

The day is generous to our hunting group. Altogether we kill nearly 50 pigs, many piglets but also a few mature boars that may qualify for medal awards, the Boone and Crockett threshold for European hunters. The next day we are limited to only young-of-the-year piglets, and after a fun morning of piling up pork, we break for a mid-day picnic on a sun-struck slope. Sausages, pork cutlets, pickled peppers, and crusty bread make a great respite.

The afternoon hunt is along the edge of an overgrown field. Target species included young pigs, red deer hinds (females) and calves, and the usual mix of predators: fox, jackals, and wolves. I have a good feeling about the location, and it isn’t long before the dogs start baying. I spot movement in the field. It’s a dog, but it didn’t look like the terriers and beagles of our beaters, and it certainly doesn’t wear a collar. It has a sharp, short nose, and moves like the coyotes in my home state of Montana. It’s a jackal. I make a good running shot at 50 yards and leave my stand momentarily to collect the critter. I want to get it before the dogs do.

I’ve killed black-back jackals in southern Africa, and I’ve heard about the golden jackals of Eastern Europe, but this is the first I’ve seen of the species that is moving northward from Turkey and the Caucasus. They are stout-bodied, with short legs, heavy shoulders, and short tails and are similar in stature to North America’s red fox.

Few hunters keep the jackals they shoot, but to me this is a great trophy. I want to keep the pelt, and that evening give the beaters a crash course in skinning. They speak little English. I speak less Bulgarian, but in the universal language of woodcraft, I get the point across, showing them where to make cuts and how to skin out legs, the tail, and the face.

I love to hunt, but the most interesting part of my experience in Bulgaria is the work done by the beaters. So on my final day in the country, I join the dog crew, beating the woods for the shooters. This is the huntmaster of my crew. Note the orange vest and the hunting horn.

Here’s a Bulgarian hunting hound. The locals call them “baracks,” and they’re a variety of coarse-haired scenthound bred in Eastern Europe to bay boar.

And another variety of boar hound. This long-legged brindled beagle reminded me of the coon hounds of my youth. This fellow was tuckered out after a long day of pushing brush and brambles.

Occasionally, the hounds would corner a boar, and the outcome is anybody’s guess. The beaters try to get to the scene of the conflict to sort things out, but sometimes the boar prevails, and sometimes the dogs come out on top. Regardless, it’s almost always a bloody affair. This hound shows evidence of a scrap earlier in the day.

The highlight of my trip to Bulgaria was pushing the ancient oak forests with the beaters. We walked miles, moving groups of boar toward the shooters. We found red stag sheds, came upon abandoned wattle-walled cottages, and encountered grown-over stone fences. Americans think of Europe as being intensely civilized, but this eastern end of the continent is wild and gamey.

On our final evening, we hunters gather for a banquet to celebrate our week. Sponsors present awards to the hunters who had scored the longest tusks. Here, Sauer’s Burkhard Bonarius shows off the ivory from his boar.

Meanwhile, the other hunters pore over the platter of tusks, comparing mass and length of their trophies. Just like hunters anywhere.

Over the course of the week, our group killed a couple of red stag hinds, a pair of jackals, and a whole lot of remarkable wild boar. But in a dozen different accents and languages, we also exchanged hunting stories, perspectives about tactics and ballistics, and invitations to hunt each other’s countries. It was a welcome reminder that hunting really is a universal passion.