Tips and Tactics: How to Hunt Mountain Goats

They cling to craggy cliffs. They stick landings on tiny jags of slippery shale. And they endure endless winters in... 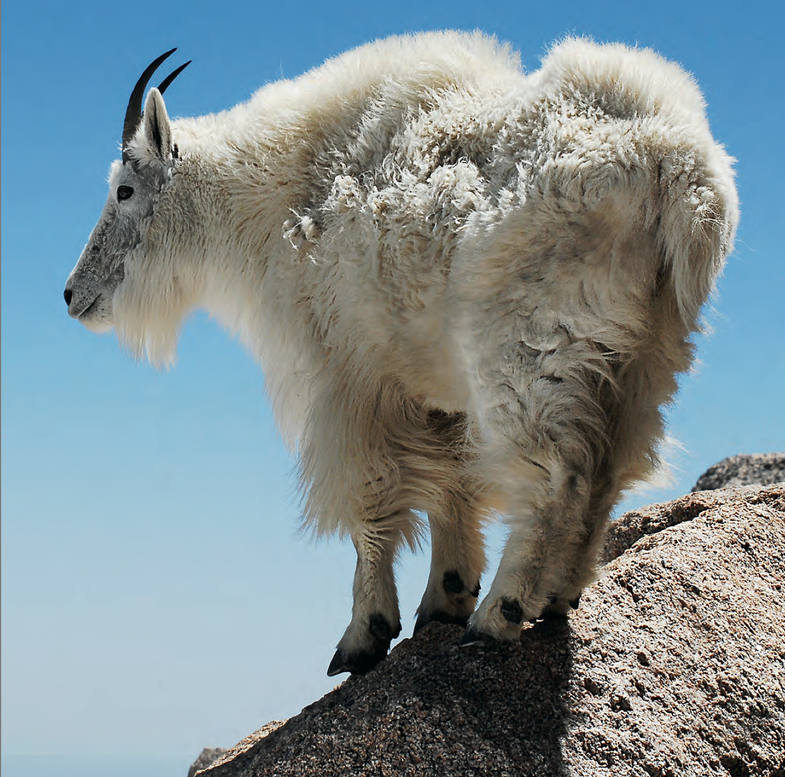 They cling to craggy cliffs. They stick landings on tiny jags of slippery shale. And they endure endless winters in the high, wind-strafed roof of the continent. They’re mountain goats, and hunting them requires the gear and determination of a mountaineer, the lungs of a Sherpa, and the balance of a gymnast. Ounce for ounce, mountain goats are the toughest, most athletic, and least appreciated of North America’s game animals. And they live in the continent’s most formidable and achingly beautiful real estate.

      If there is a freer animal than the mountain goat, I don’t know it. The alpine goat is never lured to lower elevations by succulent alfalfa, has never tasted a kernel of corn, and can spend its lifetime without stepping across a road or jumping barbed wire.

Even its surroundings are liberating. With only a couple of exceptions, North America’s population of mountain goats lives on public land, most of it in designated wilderness areas, where access is free, even if it’s not always easy.

In that fragile, alpine environment, the mountain goat makes a living by grubbing for lichens and cold-stunted plants, escaping predators by climbing to places that no animal without its specialized splayed hooves could go, and by growing a luxuriant coat that insulates it from the wind and cold.

It’s that wind that enables goats to live in the high country, places where snow is measured in yards and meters. The wind blows ridges bare of precipitation, exposing the lichen and mosses that sustain them through months of winter. That’s where you can expect to find goats, on the knife-edges of ridges, on the shoulders of high peaks, and in the rims above bowls and cirques, anywhere food and escape routes converge.

In nearly every Western state, you must draw a special permit to hunt goats, and the handful of hunters who get the opportunity must be in top physical shape, able to reach the high country and stay in the field for days at a time. It’s the ultimate backcountry hunt, where lightweight and weatherproof gear, GPS units, and immunity to vertigo are important considerations.

Good optics are important not only to locate goats from a distance but to judge their trophy potential as you close in. The final decision to shoot must be based on two considerations. First, can you anchor the animal where it stands, even if that requires shooting up or downhill at severe angles? And second, can you retrieve the goat? Too many mountain goat hunts have ended with the trophy of a lifetime either hanging up on an inaccessible ledge or tumbling all the way down to be dashed on boulders below.

If you have the luxury of picking your time, try to go as late in the season as you can. Early-season hunts have the benefit of decent weather— a serious consideration—but late-season goats have far better hair, and aside from their sharp, black horns, the luxurious coat of an October or November goat is a real trophy of the high country. 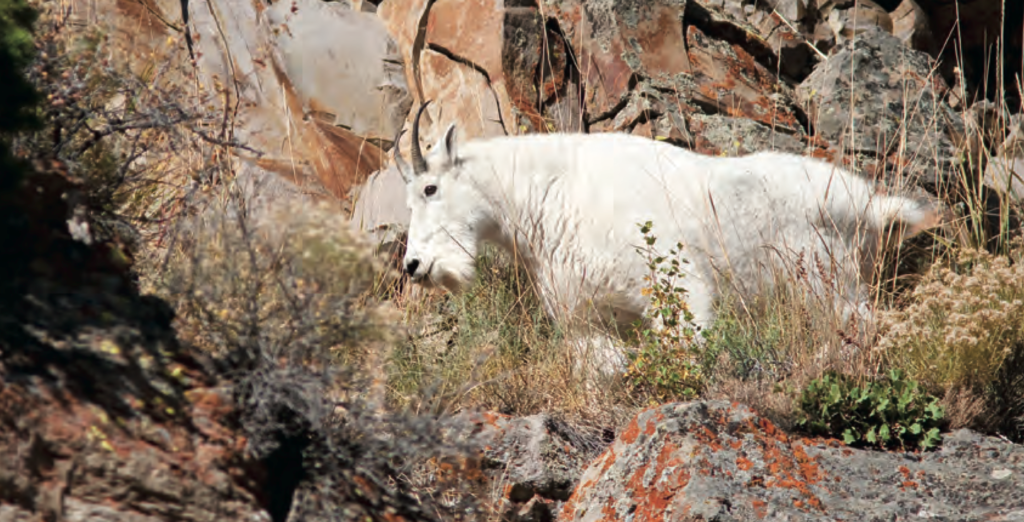 FIRST PERSON: ANDREW MCKEAN
Back in 2001, everything for me came in pairs. Early in the year, my wife gave birth to our twin boys. The streak continued later in the spring, when I discovered I had drawn both moose and mountain goat tags in my home state of Montana.

The moose hunt took priority, and I killed a decent bull not far from my home. The goat tag was for the Crazy Mountains, a high series of crenelated ridges that glower over the prairie between the Yellowstone and Musselshell rivers.

I prepared to spend as long as a full week in the peaks, assessing many goats until I spotted the right billy. But as we were setting up a big tent at base camp, I spied a white animal on the cliffs above the campground. It was a billy, standing maybe 2,000 feet (610 meters) straight above us.

In what may be the only single-day goat hunt in history, I scaled the cliffs and shot that billy in his bed at 400 yards (or meters). I was back in camp with cape and meat well before midnight. 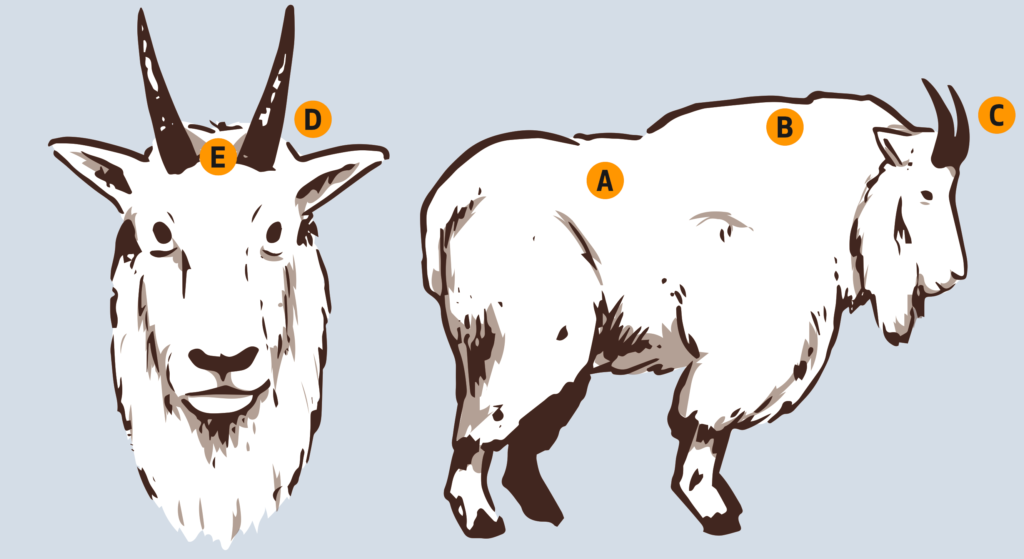 FIELD SKILLS: FIELD JUDGE A MOUNTAIN GOAT
Because male and female goats have horns of approximately the same length and shape, assessing sex and trophy status requires careful study and attention to these details:

A) Coat color
Nannies typically have dazzlingly white coats, while the coats of mature billies are often stained ivory, light khaki, or as one veteran goat hunter told me, “the color of an old tooth.”

B) Body shape
Mature billies exhibit a pronounced hump on their shoulders and appear to have thicker bodies than females do.

C) Horn shape
The horns of mature billies curve backward along the entire length. Nannies’ thinner horns tend to grow straight upward, curving only in the last third of their length.

D) Black gland
Billies have a donut-shaped gland at the base of their horns. Nannies do not.

E) Horn bases
Thick horns of mature billies appear to nearly touch at the base; trophy goats retain that mass well up the length of the horns. If you see white hair between the two black horns, you are probably looking at an immature billy or a nanny.

BRITISH COLUMBIA
For numbers and trophies, British Columbia’s remote coastal range is the top destination for goat hunters. The mountains have relatively low elevation, receive extensive precipitation, and grow abundant food, while the relatively longer growing season promotes horn growth. Populations of goats tend to be more accessible here than in the Rocky Mountains, especially for hunters who begin their treks from boats on rivers or coastal inlets.

The biggest hazard, beyond the usual mountain perils, is the weather. Freezing fog, whiteout blizzards, and icy rain can turn a sure-thing goat hunt into a life-or-death ordeal.