Carp anglers will no longer get a chance to chase The Fat Lady, one of Britain’s largest and most famous... 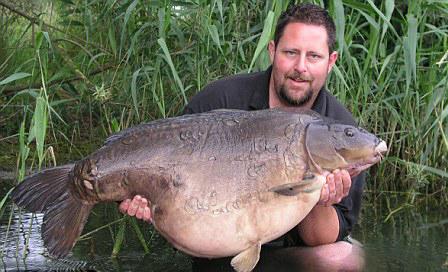 Carp anglers will no longer get a chance to chase The Fat Lady, one of Britain’s largest and most famous carp (that’s right, famous carp). An angler found her body floating in the waters of the St. Ives Lakes.

The Fat Lady is a 30-year-old mirror carp that weighed 61 pounds, 6 ounces. An average mirror carp weighs about 10 pounds. Through the years she became a legend among British anglers, and to some, landing The Fat Lady became an obsession.
Simon Giblin, 35, a marine engineer, spent seven years visiting the Fat Lady’s lake before he finally caught her two years ago. He fished the lake about 900 times.

“It became an obsession for me because I wasn’t going to stop until I had caught her and I reckon many other anglers were in the same boat as me,” Giblin told Daily Mail. “I am gutted that she has died – it’s like losing a close friend.”

The Fat Lady was caught and released more than 200 times. Some believe that stress from temperature changes may have caused her death. Gordon Howe, the owner of the fishery that The Fat Lady called home, buried her near Fatty’s Point, an area named after her.

Click herer for info about carp fishing in the U.S.