Bear Tranquilized After Walking Through a Schoolyard

Students at Tyee Park Elementary School in Washington got a break from class Friday when their school went into lockdown... 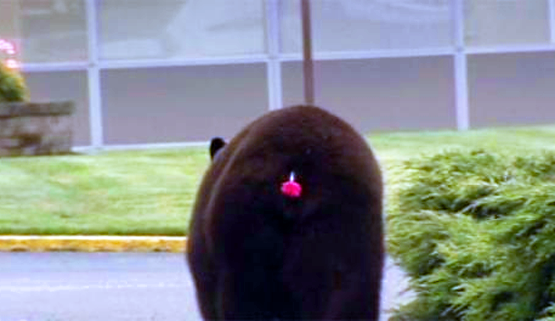 Students at Tyee Park Elementary School in Washington got a break from class Friday when their school went into lockdown because a wayward bear paid a visit, reports the Daily Mail. The bear encounter began just after midnight Friday morning when several residents of Lakewood-Fort Lewis area near Tacoma called 911 to alert authorities that there was a bear stalking the suburban neighborhood.
Authorities responded immediately but did not catch up to the bear until shortly before six a.m. Wildlife officials shot the bear with a tranquilizer dart but the bear escaped the area by running through backyards and skirting privacy fences. Authorities found the bear with the aid of Seattle TV station helicopters that were on scene to document the event.

The bear crossed through the school grounds before attempting to hide in a ditch near some railroad tracks. Authorities then darted the bear twice more. The bear was described as being a four year old male that weighed about 230 pounds. Sergeant Ted Jackson and others believe the bear’s thick fur and deep layer of fat prevented the darts from penetrating deep enough into the body. ‘We don’t know how much [sedative] got in,” Jackson told the media.

The bear was later relocated to a remote area of the Olympics or Cascades mountains. Authorities believe this is the same bear that has been spotted in the neighborhood for weeks.