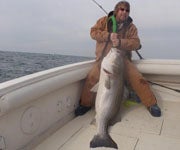 Captain Tim Cannon was fishing off Virginia Beach when he received a call from another captain telling him to head to Cape Henry because the fish were feeding. He decided to troll two sets of white parachute rigs at the new location. When one of the rods tipped, angler Cary Wolfe jumped on it and started reeling.

“You couldn’t feel much head bobbing or anything,” he told the Richmond Times-Dispatch. “It was kind of like pulling a tire through the water.

While the fight was relatively easy, Wolfe almost lost his fish while attempting to bring it into the boat.

“The first time, the line went slack for a minute,” Cannon told the Richmond Times-Dispatch. “Then it immediately tightened back up. We didn’t know it at the time, but the hook was down in her throat. It came out of her throat and caught her again in the lip.”

The troubles didn’t end there. The line snapped once they got the fish close enough to the boat. And the net they tried to use was too small for the fish — for a split second the fish lay across the top of the net with the line snapped. But luckily, the big striper’s head slipped into the bottom of the net and Cannon was able to bring the fish aboard.

An official with the Virginia Marine Resources Commission weighed the fish. This 57.75-inch striper with a girth of 32 inches will likely be the new Virginia state record, besting the previous 73-pound record striper caught four years ago.