An eight-year-old boy reeled in the biggest king mackerel fish ever landed in the state of Alabama Wednesday. Andrew Quinn,... 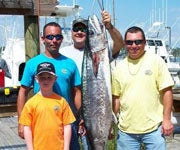 An eight-year-old boy reeled in the biggest king mackerel fish ever landed in the state of Alabama Wednesday.

Andrew Quinn, of Scottville, Mich., was on his first deep-sea fishing trip when he caught the 68-pound, 3-ounce fish, al.com reports. Despite beating the previous record by 5.5 ounces — Michael J. Kirchler, of Mobile, Ala., caught a 67-pound, 15-ounce king mackerel in 2002 — Quinn will likely have to share the state-record title thanks to Alabama’s rules for saltwater fish.

According to the regulations, saltwater fish weighing more than 25 pounds must beat the previous record by at least .5 percent in order to be considered a new record. Quinn’s fish will likely miss it by 1.5 ounces, Kevin Anson, the Marine Resources Division’s chief fisheries biologist told al.com.

While the paperwork is being finalized, Quinn has other things on his mind: enjoying the rest of his family vacation and memories of the fight.

Quinn was fishing over the Trysler Grounds, a popular spot about 20 miles out in the Gulf of Mexico. He was aboard the Fish Trap charter boat with his grandfather, father and three older brothers. They were drifting live pinfish — one of which got smashed three hours into the six-hour trip, and the fish that ate it started peeling off line. That’s when Quinn grabbed the rod.

“I almost started to think it was a big shark at first when it just went straight down like that and just kind of stayed deep,” Billy Neff, who was at the helm of the boat, told al.com. “It turned into a tug-of-war for about 10 minutes.”

After another 10 minutes into the fight, the crew was able to see some of the fish’s color as it edged closer to the surface. Neff was excited when he saw that the fish was a huge king mackerel, but his excitement quickly turned to panic once he saw how the fish was hooked.

“The hook was actually going back down through the tip of its nose. The leader was wrapped around its jaw one time,” Neff told al.com. “My heart started beating real fast and I literally started shaking.”

The crew was unable to gaff the first on the first few passes. Relief came once the fish was finally landed.

Quinn still has some soreness and bruises from the fight, but he is ready to tackle another big fish.

“You never know. I could beat my own record,” he told al.com.