A thirty-minute fight with a monster cubera snapper off the coast of Alabama may result in a new state record.... 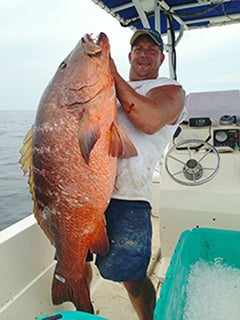 A thirty-minute fight with a monster cubera snapper off the coast of Alabama may result in a new state record.

Brett Rutledge and David Simms were trolling with live hardtail for mackerel in 170 feet of water about 40 miles off of Dauphin Island when something big hit one of the lines. Rutledge immediately grabbed the Shimano Speedmaster reel spooled with 30-pound-test monofilament line and commenced to fighting whatever was on the other end.

“At first I thought it was a big amberjack because I’d caught quite a few jacks earlier. But when it ran away from the wreck we were fishing, I immediately thought it was a shark,” Rutledge told AL.com.

David did get the gaff but was unable to pull the fish aboard by himself. Rutledge rushed to help him and together the two dragged the leviathan onto the boat.

“As soon as it hit the deck I knew it was over 60 or 70 pounds. I told him, ‘That one’s going to have a shot at being a state record,'” Rutledge said.

Certified scales declared the four-foot-long snapper weighed 84.9 pounds. The current record for cubera snapper is held by Grand Bay’s Michael Crawley. In 1988 he landed a 52-pound beast. If certified, Rutledge’s fish will sink that record by more than 32 pounds.

Needless to say, Rutledge is thrilled by his catch.

“I’ve been around some pretty big stuff caught,” Rutledge said. “I’ll have to say this was probably one of the most exciting fish because I’ve never caught one off Alabama before and I know how rare it is to catch one this big.”