Both of these trophy muskies were carefully measured and released 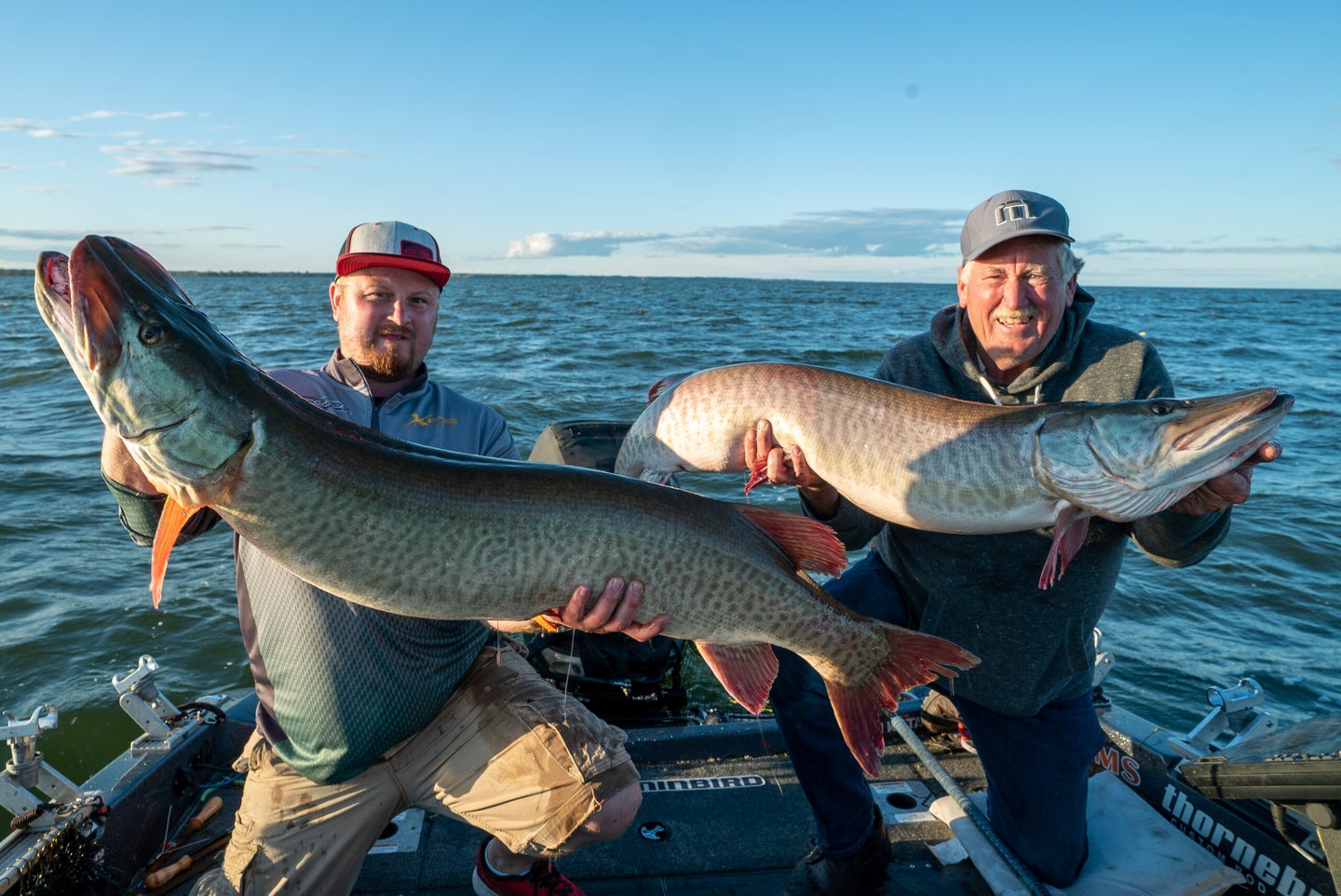 It had already been a banner day of muskie fishing for guide Doug Wegner and his Illinois clients David Pasula and Roger McClintock.

It was Sept. 8 at 6 p.m., and the fishermen had boated three good muskies from Wisconsin’s Green Bay measuring 47-inches, 42-inches, and 38-inches (each of those muskies that were carefully measured and released) but the crew was just getting started.

“We were closing in on sunset, and I was trolling a good area where I’d previously caught fish, when an inside rod jumped, and we had a fish on,” says Wegner, who uses planer trolling devices and nine rods simultaneously when working Green Bay muskies. “Roger was fighting the fish getting it close, and I slowed the boat to about 1.8 m.p.h. to land it in my big scoop net.”

Wegner was trolling plugs at 3.5 m.p.h.  But he never stops trolling to net fish because with so many lines out they would tangle. So he keeps the boat in gear, moving forward slowly to control the lines.

“I netted Roger’s fish, and we high-fived in the boat because a 50-incher is his biggest, and a muskie that size is the Holy Grail of the sport,” says the 27-year-old guide. “That’s when I noticed another rod on the opposite side of the boat was jerking with another fish hooked.”

Wegner thought the second fish was smaller, as he unhooked the first 50-inch muskie in the net.

“The second fish never took drag, and I told David to just bring it to the surface and I’d unhook it and not net it – then I saw his muskie was bigger than Roger’s first fish and knew I had to net it, too.”

Wegner maneuvered the net still holding Roger’s 50-inch fish around the stern, and knew he’d only have one chance to net David’s fish, which now looked huge.

“I made the dip, netted the second fish, and with two giants in the net we really started celebrating,” says Wegner.

The second fish was indeed bigger, measuring 53.25-inches in length with a 24-inch girth. Roger’s muskie measured 50-inches long, 23-inches around. Both fish were carefully revived and released back into Green Bay.

You can watch a Youtube video of both fish in the net below (but be ready to hear a few cuss words).

It was a day to remember for any muskie hound, but Wegner has been on a tear with muskies on Green Bay for years. As a full-time fishing guide (spending some time in Minnesota) he has a personal muskie guiding record that is incredible by any measure.

“My goal this year was to produce 30 muskies over 50 inches for my clients, and I’ve done it with 35 fish over 50 inches so far, and I’ll be fishing muskies for awhile yet this year,” he says.

Wegner says 90 percent of his big muskies come from Green Bay, caught mostly while trolling with planer boards, and 9 rods that can cover a 200-foot swath of water.

READ NEXT: The Greatest Day in Minnesota Muskie Fishing History

Wegner’s biggest muskie from Green Bay is a 55.75-incher caught last year on Sept. 6 that he thinks weighed 50 pounds. But, he says, the big and clean bay of Lake Michigan may hold a 60-pound fish, if caught at the right time and place.

He says one of his more important muskie fishing tools is his Hummingbird SOLOX 12 MegaSI side imaging sonar that allows him to track bait schools and individual big muskies during trolling.

Wegner says the Green Bay muskie fishery is 100 percent stocked fish, which he credits the state DNR fisheries folks for building and maintaining.

Both 50-inch muskies caught that day with Wegner by his Illinois angler clients are going to be replica-mounted by Rick Lax, a taxidermist in Conover, Wis.