While fishing the Columbia River last week a Washington angler landed a 20-pound, 5-ounce walleye to break the previous state... 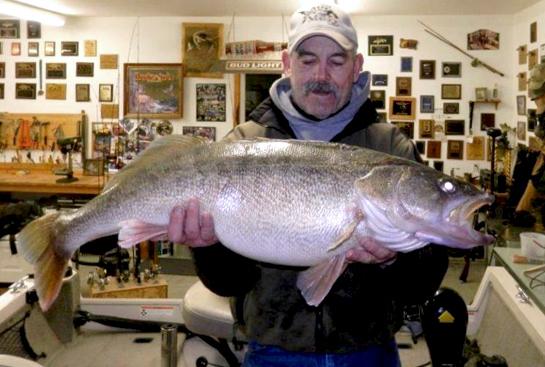 While fishing the Columbia River last week a Washington angler landed a 20-pound, 5-ounce walleye to break the previous state record. Wildlife officials were quick to confirm the catch. A walleye weighing more than 20 pounds hasn’t been caught in the U.S. since 1988.

John Grubenhoff rushed home from work on Friday afternoon to squeeze in a few hours of fishing before dark, according to the Spokesman-Review. The 57-year-old has spent the past 29 years pursuing walleye and his most successful catches have historically occurred during the winter months after sunset.

The forecast predicted a cold front and Grubenhoff was optimistic about fishing conditions at Lake Wallula. His hunch proved spot-on, and within 30 minutes he landed a 14-pound hen and a smaller male. Half an hour after releasing the two walleyes, Grubenhoff made his third and final catch of the evening.

He was fishing a current break along a rocky shoreline with a 6-inch minnow bait strung six feet behind a bottom walker. The bite he’d been hoping for came as he trolled upstream, and Grubenhoff pulled the big fish out of the water.

“I got it up to the boat and I wasn’t paying attention to how huge it was until I lifted it,” he told the Spokesman-Review.

The female walleye felt heavy with eggs and the veteran angler suspected the hen might set a new record. After depositing the walleye in the livewell, Grubenhoff retuned to fishing. He lasted just 45 minutes before giving in and returning to shore. “I was so excited I couldn’t concentrate,” he said.

The walleye weighed in at 20.32 pounds, besting the 2007 state record of 19.3 pounds. The fish measured 35 1/2 inches from tip to tail with a girth of 22 3/4 inches. A state biologist was present and the Washington Department of Fish and Wildlife confirmed the record Wednesday. Such a quick confirmation is unusual, but the catch was a “big deal” according to DFW warm water fisheries manager Bruce Bolding. It’s been 26 years since a U.S. angler caught a walleye weighing more than 20 pounds. That catch occurred in Missouri in 1988.

But now Washington is home to the fifth largest state-record walleye, and wildlife officials expect the state to continue moving up in the ranks. The largest walleye ever taken weighed 25 pounds and was caught in 1960 on Old Hickory Lake in Tennessee, according to the International Game Fish Association.

Apart from a few smaller fish for the dinner table, this big walleye was the first Grubenhoff kept this year. He usually releases his catches but was willing to make an exception this time.

“I felt bad about killing the fish, to tell you the truth,” he told the newspaper. “But when you get a fish like that, it ain’t like you can have a reproduction made. I’ve caught a lot of fish. I knew it was special, maybe the fish of a lifetime.”