Aishat Maksudova, a 56-year-old Russian farmer from the North Caucasus Mountains, got the better of a wolf that tried to... 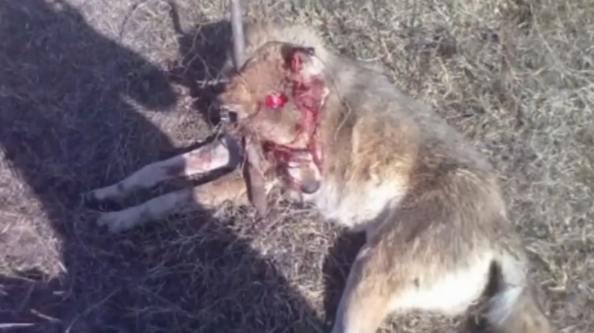 Aishat Maksudova, a 56-year-old Russian farmer from the North Caucasus Mountains, got the better of a wolf that tried to take out one of her cattle.

Maksudova ran over to stop the wolf, which was about to kill one of her calves and then the canine turned its attention on her (Russia is home to Eurasian wolves, close relatives to our gray wolf).

“The wolf suddenly jumped on me with an open mouth. He clawed onto my leg and I wanted to hit him with the ax,” she said in an interview with ITN. “When I raised my arm up … the wolf was just holding my hand. I wanted to open his mouth and put my fist all the way to his throat, but I could not open him … And then I took the ax and hit him on the head.”

Maksudova was treated for wounds on her hand at a local hospital and doctors said she was recuperating well. As you can see from the photo, the wolf died.

News of the wolf bashing has traveled quickly and Maksudova has already become a hero of sorts in the Caspian Sea province.

Is Maksudova the baddest grandma on the planet? Comment below!