A Missouri bowhunter shot what appeared to be a massive coyote last week while deer hunting in the Franklin Island... 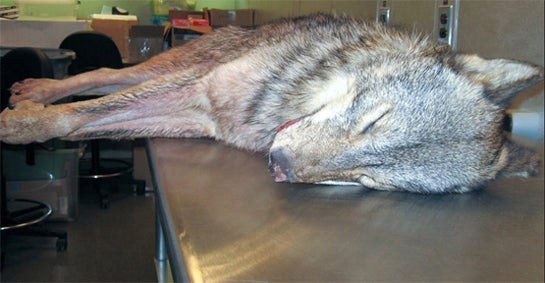 A Missouri bowhunter shot what appeared to be a massive coyote last week while deer hunting in the Franklin Island Conservation Area. But the sheer size of the animal is calling its biological identification into question.

Although the nation’s largest coyote on record was 74 pounds, this male predator weighed in at a hefty 81 pounds, reports the Columbia Daily Tribune. And what’s more, biologists from the Missouri Department of Conservation say the animal wasn’t even fully mature.

The MDC announced in a press release that no tags or markings suggest the mystery predator was a captive animal. The MDC collected tissue samples for DNA analysis to confirm the species, which will take three to six months. MDC speculates the animal may be a wolf, but other possible identifications include a large coyote or some sort of hybrid animal.

The hunter, who asked the MDC to withhold his name, shot what he thought might be a state-record coyote around 8 a.m. on Oct. 30. Coyotes are in season in Missouri and the hunter had a license. If the animal turns out to be a coyote, it will be returned to him for mounting. If the DNA analysis confirms it’s a wolf, the MDC will dispose of it.

Gray wolves haven’t been native to Missouri since the late 1800s when populations succumbed to hunting and habitat loss. While the MDC reports there is no evidence of breeding populations in the state, wolves are still a protected species in Missouri.

Regional wildlife supervisor John George told the Columbia Tribune the animal might be a wolf that traveled hundreds of miles in search of new territory. A wolf was killed by a landowner in 2010 in Carroll County, and another was shot in 2002 in Grundy County. Both had wandered to the state from the northwest, George said.

What do you think? Is this mystery predator a coyote, a wolf, or some sort of hybrid? Comment below!