Michael Eisele of Kiel Germany caught this enormous 103-pound cod while fishing off the coast of Norway. If the catch... 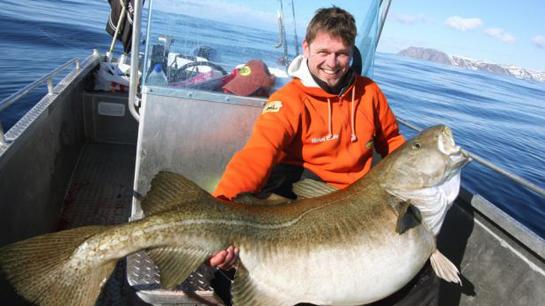 Michael Eisele of Kiel Germany caught this enormous 103-pound cod while fishing off the coast of Norway. If the catch is approved by the International Game Fish Association, it will break the current world record (which has stood for 44 years) by about 5 pounds.

Eisele battled the fish for half an hour before two of his friends finally helped him haul it into the boat, according to the Daily Mail. The cod measured more than 5 feet in length.

According to the Daily Mail: “I saw two red dots on the sonar-screen and it looked like a big one. So I concentrated from that moment on. It felt like ground contact. I took it very slowly and carefully. It took me more than half an hour to get the fish up. When we saw the fish my knees was starting shaking. It was so big … It was an indescribable feeling. It was fish of a lifetime.”

Eisele is donating the cod to the Norwegian Fisheries Museum in Bergen which will mount and display the fish.