A 172-pound, potential record cobia was taken by a spearfisherman off the coast of Brazil recently. Spearfishers Marcelo Mello Lobato,... 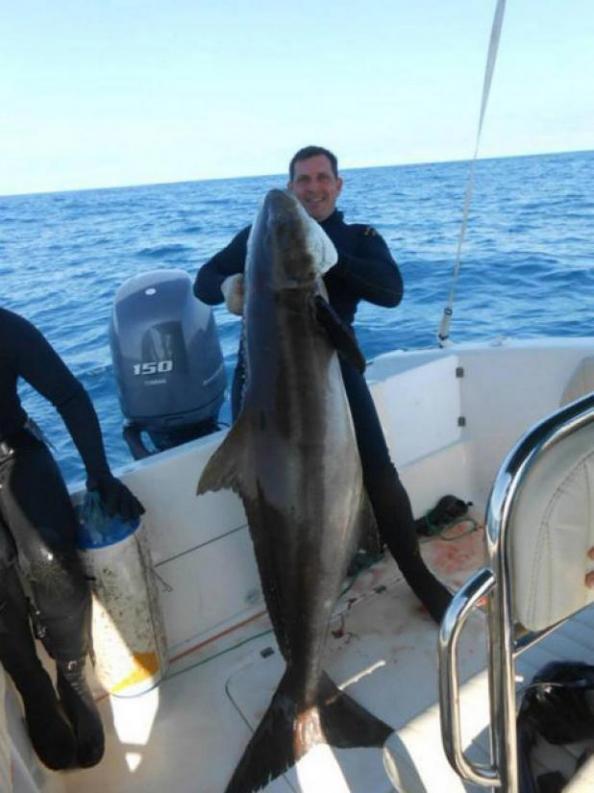 A 172-pound, potential record cobia was taken by a spearfisherman off the coast of Brazil recently.

Spearfishers Marcelo Mello Lobato, Cyrus Bravin and Gabriel Santana ventured 50 miles off the coast of Marataizes (about 200 miles northeast of Rio de Janeiro). They were heading toward an 85-foot deep area well known to spearfishers as the home of big cobia–the locals call them “bijupira,” which means tasty fish.

Bravin was the first to pull a fish. His 54-pound cobia was revered by all on board as a true monster. Little did the crew know, however, that 54 pounds was chump change compared to what lurked below.

Lobato dove 30 minutes after the first fish was snagged. He held tight at 30 feet below and was watching smaller fish when a monstrous blur appeared. Lobato bid his time as the fish swam closer. When the time was right, Lobato fired into the fish’s back.

“It continued to swim near the surface as if nothing had happened,” Lobato told the Bradenton Herald. “I swam over to see if we could get another shot.”

But Lobato’s movements spooked the fish and he swam for the bottom. He thought the fish was lost to the depths for sure until it slowly ventured upward after about 10 minutes. Lobato hit it again when it was only 15 feet from the surface. Again, the fish bolted for the bottom only to return the surface allowing Lobato to place a third and final shot. From start to finish the battle lasted 30 minutes.

The fish was weighed on two separate scales once Lobato and friends reached shore. Both scales confirmed the cobia’s weight at 172 pounds.

Lobato has submitted his catch to the Underwater Spearfishing Association for record status. The current record cobia stands at 145.9 pounds.