Wisconsin is clearly the best destination in the world for giant smallmouth these days. Consider this: in mid-May the state... 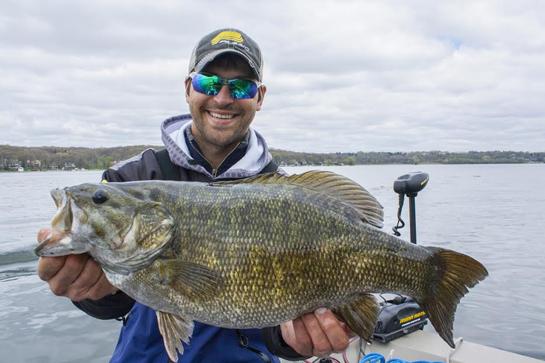 Wisconsin is clearly the best destination in the world for giant smallmouth these days. Consider this: in mid-May the state produced an 8.29-pound giant from Green Bay and another giant from an unnamed lake in the Milwaukee area.

The second fish, measuring an incredible 24.5 inches in length and sporting a massive 20-inch girth, weighed an estimated 9.6 pounds, more than enough to break the current 9.1-pound state record for the species. That fish was caught in Indian Lake in 1950.

The lucky angler was Ben Royce, who handles pro-staff and event marketing for Plano Synergies. He was fishing with friend and pro-staffer Eric Haataja, a big-fish specialist and full-time guide based in Milwaukee. What started as a day set aside for shooting video for social media ended with a fish of historic proportions.

Royce caught the giant on a three-inch Berkley Havoc Sick Fish. By the way, Royce released the bass after a few quick photos!