Oregon Sage Grouse: When Ranchers Are the Conservationists

As a candidate species for listing under the Endangered Species Act, the greater sage-grouse has been ruffling feathers for years.... 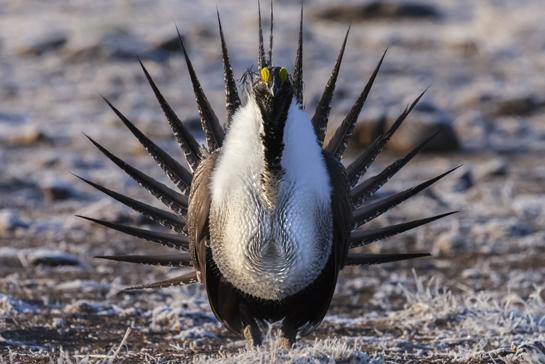 As a candidate species for listing under the Endangered Species Act, the greater sage-grouse has been ruffling feathers for years. Landowners are growing nervous as the Sept. 2015 listing deadline creeps closer, and the conflict that often arises between private and federal interests over controversial species remains a possibility.

But a number of private landowners in eastern Oregon have been working toward a cooperative agreement with the federal government to head off potential conflicts. Recently, the U.S. Fish and Wildlife Service entered into a Candidate Conservation Agreement with Assurances alongside the Harney County Soil and Water Conservation District. This CCAA will operate within the borders of Oregon’s largest geographic county to cover more than one million acres of private rangelands.

CCAs and CCAAs are nothing new, although Oregon is the third state to implement them for sage-grouse habitat. Under a CCAA, landowners voluntarily agree to manage their lands to remove or reduce threats to a species. In return the federal government guarantees that landowners will not be subject to additional regulations should that species become listed under the ESA.

Many landowners are starting to explore alternatives to ESA regulations on their property, particularly in the wake of hot button issues like the northern spotted owl ESA listing that turned the timber industry upside down in the Pacific Northwest.

“We felt the impacts and the hardships that the ESA listing of a species could cause to communities, to economies, to individual families’ ability to make a living,” said Tom Sharp, chair of the Harney County Sage-Grouse CCAA Steering Committee and chair of the Oregon Cattlemen’s Association’s ESA Committee. “Now the sage-grouse is the farmer/rancher’s spotted owl of today. But there’s a difference. The sage-grouse issue is the spotted owl on steroids.”

Although the spotted owl’s range was limited to the Pacific Northwest, the sage-grouse inhabits 11 western states: Washington, Oregon, northern California, Nevada, Idaho, Montana, Wyoming, Colorado, Utah, and North and South Dakota. The sagebrush ecosystem historically spanned an estimated 240,000 square miles but has since plummeted to nearly half that range, according to the Sage Grouse Initiative.

Sage-grouse rely on open lands populated by sagebrush, bunch grasses, and leafy plants. Threats to that environment include wildfire, invasive grasses, juniper trees, fences, habitat fragmentation, and human development. Eastern Oregon is home to some of the best remaining grouse habitat in the Great Basin. Those same arid sagebrush plains also support vast ranching operations, which play a vital role in Oregon’s economy. For instance, cattle and calves were ranked as Oregon’s third most valuable commodity in 2011 with an estimated value of $609 million.

Good for Birds and Herds
Although ranchers naturally hope to protect operations on their private lands, they also have a vested interest in encouraging grouse habitat. As Sharp likes to say, “What’s good for the bird is also good for the herd.” As it turns out, managing range lands for sage-grouse also benefits cattle. For example grazing cows consume much of the vegetation that provides fodder for wildfires. As an added bonus grouse habitat also benefits other wildlife species. That includes mule deer, elk, pygmy rabbits, and golden eagles, just to name a few.

Roaring Springs Ranch in Frenchglen, Ore. began managing for sage grouse in 1994 and has since invested nearly $2 million in grouse habitat restoration efforts–all without relying on any government funding. That includes removing juniper trees, preventing wildfires, and controlling invasive vegetation. Conscious habitat management across two decades has worked wonders for the cattle operation as livestock numbers have increased alongside the ranch’s economic health.

“As a result we’ve got a strong sage grouse population,” ranch manger Stacy Davies said. “The Candidate Conservation Agreements give us an opportunity to continue what we’ve been doing without the consultation that’s necessary if the species is listed.”

This outlook seems to be the general attitude encountered by project leader and USFWS state supervisor Paul Henson. During the past two years Henson and his team have been meeting with landowners and other community members in the basement of the Harney County courthouse, building trust and hammering out a compromise amenable to all parties invested in sage-grouse habitat.

“People will sort of take their chances with the devil they know versus the devil they don’t,” Henson said. “I think these landowners are working with us because they at least know what they’re going to get from us right now in this agreement and what it means if the species is listed in the future.”

Protected Ground
Roaring Springs Ranch operates on a little more than one million acres, and within a few months almost all of it will be covered by CCA or CCAA partnerships.

“The Endangered Species Act is full of problems. And CCAs and CCAAs are one way to limit the damage,” Davies said. “The downside is that it tends to focus management on a single species, which can be problematic. Very short term you can focus on any one single trait or single species, but if you do it for very long other things can suffer. So we tend to take a big picture holistic view.”

Davies’ ultimately hopes to foster the healthiest sage-grouse population in the U.S. while maintaing a robust ranching operation. This desire for balance among different interests seems to be a universally recognized sentiment in eastern Oregon, and is part of the reason this initiative between federal government and private landowners has proven successful so far. The cooperative atmosphere in Harney County contrasts sharply with the bitter Nevada ranch disputes centering around cattle rancher Cliven Bundy.

“There, at no time during the [Harney CCAA] process, was any confrontation that is sometimes expected in these challenging discussions,” District Manager of Harney County Soil and Water Conservation District Marty Goold said. “There was no controversy, there were no death threats, there was no animosity between the conservationists and landowners… It’s folks rolling up their sleeves at the table, acknowledging each other for who they are and what they represent, but at the end of the day being able to shake hands and really say, ‘I can agree with that.’”

Despite the relative ease of setting up conservation agreements there were still a few hurdles to overcome. Goold cited the difficulty of composing a document that spans 30 years while anticipating any future barriers to conservation that might arise after the fact. Henson noted that it has proven somewhat difficult to reconcile ESA-related activities with landowners’ desire for maintaining privacy and property rights.

“Bringing those two things together was probably the hardest thing,” Henson said. “So having to sort of respect their privacy and their right to not have people always looking over their fence or over their shoulder, but at the same time giving them a permit that would require a certain amount of reporting and monitoring.”

Navigating this aspect of the CCAA arrangement is a key element to Harney County’s success story. Instead of relying on outside federal gatekeepers to check on landowners, the Harney County Soil and Water Conservation District agreed to accept the CCAA permit and work as an intermediary between the feds and private landowners. The SWCD has already cultivated relationships with landowners and is well positioned to monitor the conservation agreements.

“At the end of the day we, the district, have that regulatory authority to say, ‘Hey landowner, you’re not meeting your agreement and we’re canceling this,’” Goold said. “There’s a lot of ownership on our part and our board took a significant risk by saying we will be the local government that will do this. Everyone is kind of really watching this process to see how it does shake out and if it is effective, and what they can learn from it in their respective areas.”

This is where the potential long term impacts of the CCAA begin to emerge. Harney County alone encompasses an enormous swathe of sagebrush habitat. With more than 10,100 square miles the county comprises one tenth the land mass of Oregon and sits on more acreage than the state of Vermont. Harney’s grouse restoration efforts have not only attracted national media attention, but they’ve also garnered interest from surrounding counties and states. Goold is constantly fielding calls and inquiries about the success of Harney’s CCAA.

Seven other counties in eastern Oregon have since followed Harney’s example and are pursuing similar CCAAs of their own. Once these counties and their respective landowners are on board with formal habitat restoration efforts, almost all of Oregon’s sage-grouse habitat will be protected. That includes hundreds of participating landowners managing millions of acres for grouse.

Despite all this proactive grouse restoration in Oregon, there is still a great deal of unprotected sagebrush steppe in other western states. If the USFWS considers splitting up the sage-grouse populations when making a listing determination for grouse next fall, it’s possible that Oregon could avoid an ESA listing within state lines. If the population remains contiguous, however, landowners believe it’s unlikely the sage-grouse will escape an ESA listing. Regardless of the outcome, the CCAA modeled in Harney County is certainly a step forward for partnerships between private landowners and government organizations.