In order to introduce more people to hunting, we’re encouraged to invite hunters—new and seasoned—to accompany us afield. Sometimes, though,... 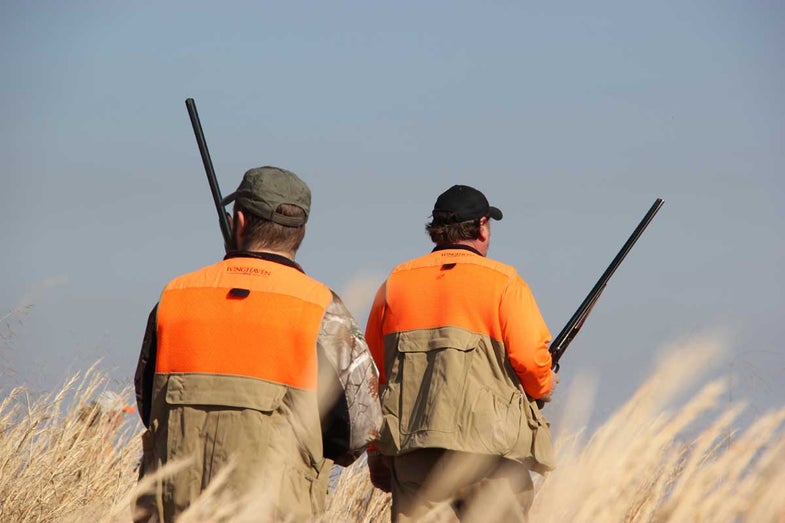 In order to introduce more people to hunting, we’re encouraged to invite hunters—new and seasoned—to accompany us afield. Sometimes, though, after we’re there, we realize that we should never have invited that person in the first place. Here are 11 stories of poor manners and bad hunting etiquette that ruined hunts. My dad always said everyone provides an example—a good one or a bad one. Find out how not to be that person who doesn’t get invited again.

For example, there’s a minister and podcaster (Black Man with a Gun), Kenn Blanchard, who lives in the D.C. area who relishes any time he can spend in the woods and away from the problems he deals with every day. He often invites friends to go with him as he hunts for turkey or deer in Maryland or Virginia. “The folks that talk too much come to mind—the nonstop chatter about people and life when we were supposed to be hunting for whitetail deer and turkey if they were in the area. The wildlife never showed because the talking spooked everything. I couldn’t enjoy nature, or its sounds. We couldn’t stalk, and sitting near the stand was a waste.”

2. Failing to Be a Good Host

Here’s an example from a college professor, aka my husband, from Missouri who recalled, “I once hunted with a guy who was too competitive, to the point that he took advantage of others’ inexperience with the hunting site. He invited guests to his family’s property in western Virginia to deer hunt, and then made sure that he took the obvious prime spot. To make things worse, he was ungracious about his hunting success afterwards, and lorded it over his guests.”

3. Taking a Shot That’s Not Yours

A popular professional hunter, Kristy Titus, said her ex-boyfriend talked her into going elk hunting, promising her that he’d do the calling and she would be the shooter. He’d already had a few close encounters with an elk, and knew that she hadn’t been out hunting yet that season. He called in a huge bull elk.

“I could see the bull quartering to me, about 45 yards away, and I just needed him to step away from two low branches, about two or three steps,” she recalled. And then, she heard “thwack,” as the caller’s arrow shot toward the bull. Yes, instead of stepping back about 20 or 30 feet behind her to draw the bull in, her caller decided to become the hunter.

She added, “We’re buddies, but I will never elk hunt with him again.”

One of the country’s most popular hunting bloggers, who prefers to remain anonymous so that family relations stay intact, recalled a hunt that still makes him shudder.

“I have a brother-in-law that is a know-it-all when it comes to hunting. Been ‘doing it all his life,’ he says. But the last time I was hunting with him, we were upland hunting and I was scared for my life—and especially for my dog’s life. He would swing his gun around with no care about where it was pointed. We spent the whole day ducking, running and avoiding him. That—I can deal with, but it’s when he approached my dog (on point) with a shouldered gun aimed at my dog’s nose…that was the last straw. My brother and I told my dad that we’re never hunting with that guy again.” 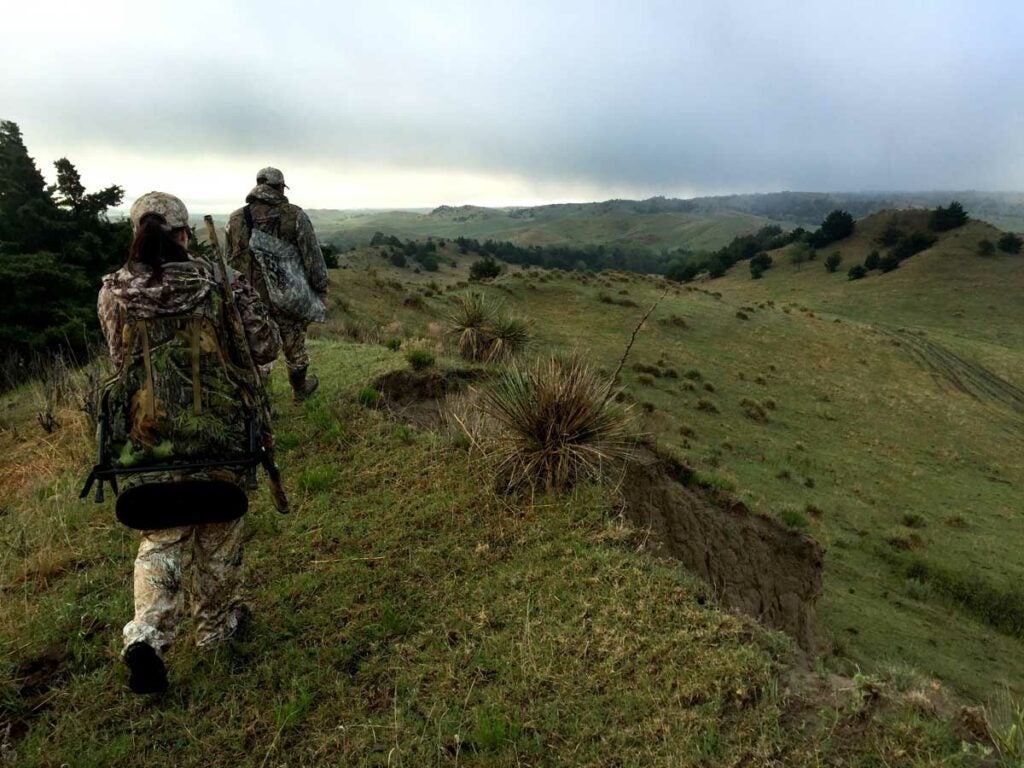 A pair of Nebraska turkey hunters walk a ridge in search of a bird.

5. Getting Your Friends in Trouble

The same blogger said, “I have hunted with others on land that I worked hard at getting permission to hunt on and my ‘friends’ would trash the place and show no respect for the owner of the land. One time I had a friend do a donut out in a hay field, which was obviously a huge deal… Since then I actually quit hunting with others as I couldn’t trust anyone else with what I worked so hard to get. It’s just my family and that’s it.”

6. Coughing Up a Storm

She refers to it as “The Cough.” This former regional director of a conservation organization, Ellen Benitz, agreed to go on a filmed hunt on her property. “I had forgotten that this person was a heavy smoker and had a persistent ‘smoker’s cough.’ I asked if he would be able to refrain from coughing and he replied that he ‘hardly ever coughed.’”

Apparently the smoker had become so used to his hacking that he didn’t realize it. “We tried multiple set ups, had gobblers coming within shooting range—when he would subtly cough and the bird would tuck its wings and run off. I got very frustrated because he wasn’t aware he was coughing and it made me look bad as a caller. I didn’t want to hurt his feelings by continually commenting on his coughing, so I just settled in for the day and tried not to get too frustrated about the situation. But I was thinking that we were also ‘educating’ these birds. The day finally ended, with no birds shot, and no footage for him. I can only hope that when he got home and reviewed some of the footage he would hear his own cough. I declined the next time he asked to tag along on my hunt.”

On another hunt, Benitz invited a new deer hunter. “She was not a smoker, but after sitting in the deer stand for a short time, she would cough several times an hour. She couldn’t use throat lozenges because of the smell. I never seemed to notice her coughing at other times, but in the stand, she did. I suspect it may have been a nervous cough. It was her first time deer hunting and also her first time in a tree stand, and she was admittedly afraid of heights.”

Benitz offered many stories, and this one revolves around another “friend” who wanted to tag along on a turkey hunt and film it. Since the hunt would be on family property, with few birds that year, the former director made it clear that she would be the hunter and he would be the cameraman. And then, the story unfolds: “He seemed OK with that plan…until we had two birds come in. The first bird came into our decoys and I shot it, but after I shot, we heard another bird’s thunderous gobble immediately behind us. The tom came around us and went directly to my downed bird and started to peck at him. My friend/cameraman repeatedly begged to borrow my gun to shoot this bird as well.”

She acquiesced and passed him the gun. “Then after retrieving the birds, he had the nerve to brag about how much better his bird was than mine… Now I felt even worse because an extra bird had been taken from the property, and he made me feel like it was somehow inferior to the bird he had taken. Of course he promised me a copy of the filmed hunt, although it took over a year to get it and I hate watching it as it renews those sore feelings.”

An editor of a digital hunting publication, Huntinglife.com’s Kevin Paulson, has worked as a hunting guide. “My last evening on the mountain guiding was eventful. I had spent all day cleaning up our camp, and in walks this aging celebrity hunter for dinner with his guide. He spent the next hour sitting around the camp table telling racist jokes; I had to actually walk away because he made several people uncomfortable, including his invited guest.”

9. Standing Up a Buddy

A founder of a non-profit that takes veterans hunting, Freedom Hunter’s Anthony Pace, said he’d had enough of being stood up for hunting. “I have an ex-hunting buddy burn me two times on planned hunts. Each time I bought licenses because he had private land we could hunt. The first time was a late-season elk hunt and according to him the elk the weather never pushed the elk to the private land. He ended up getting an elk, though.

“The last time was an archery deer hunt in southeastern Colorado. He had private land we could hunt. After I purchased the tag, he said that I could not hunt the private land with him. OK, so I would hunt the public ground in the area and we would share a camping area. I show up the day before he was going to arrive. After the first day, I called to see where he was on the road only to be told that he decided this weekend wasn’t good for him. He was now going to hunt following weekend. Fool me once, shame on you. Fool me twice, shame on me. I didn’t try a third time.”

The same guy also recalled the story of his buddy who told others about his sweet hunting spot. “There’s nothing like taking a guy to your favorite hunting spot, only to go back and find him in your secret spot with a group of his friends.”

11. Taking the Best for Yourself

A public relations director in the outdoor industry who prefers to remain anonymous remembers her first turkey hunt. “I had been invited to hunt with an outdoor personality. We were in the blind by 5:30 a.m., decoys set and turkeys gobbling all around us.” She related how a tom and jake came into the decoys, and at that point, the seasoned hunter turned to her and whispered, “You take the jake. I’ll take the tom.” Bam.

“I couldn’t believe that the whole thing only took about 30 minutes, but when I told my friends who hunted turkeys that the host told me to shoot the lesser of the two birds, they were amazed.”

She wondered, “If I had been a dude, would he have done that?” 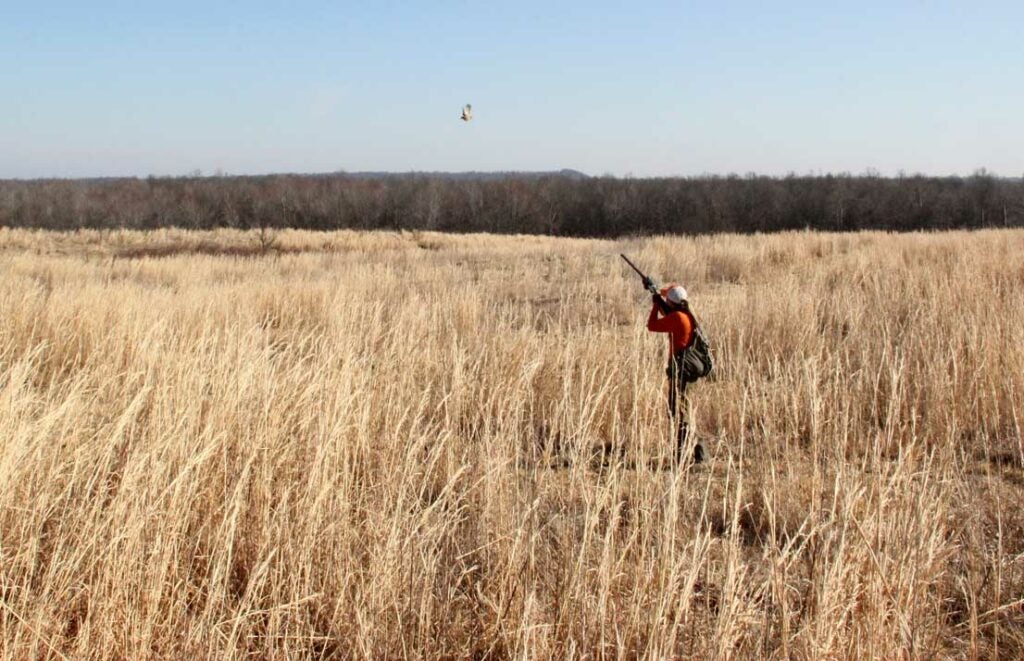 When all else fails—go solo.

Some people don’t have time for any nonsense, and when they can get to the woods, prefer to go it alone. An editor at a major shooting publication confided that he doesn’t want to hunt with anyone else. “I consider the time I spend in the field as ‘my time,’ so I like to hunt alone. It’s the time I have to be closer to nature, which I find to be very therapeutic.”

In the case of the stories told, hunting alone might have been a better option.