This week’s news of the scrappy survival instincts displayed by 16-year-old Autumn Veatch sent me back nearly 20 years to... 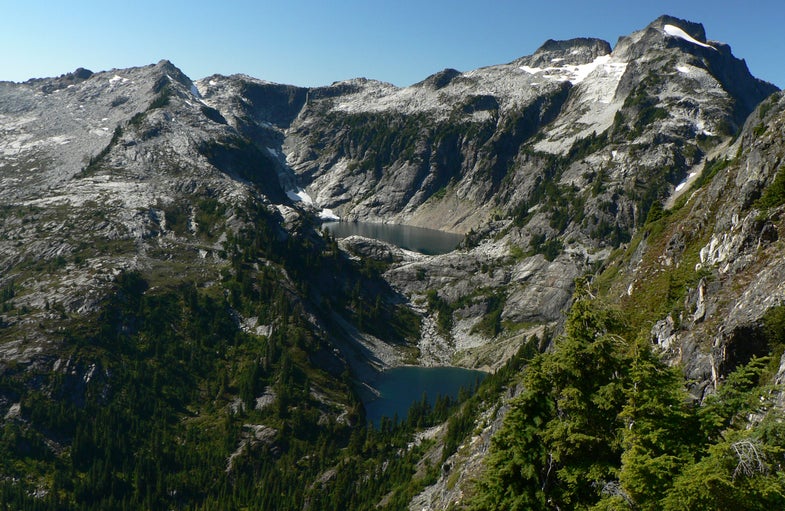 This week’s news of the scrappy survival instincts displayed by 16-year-old Autumn Veatch sent me back nearly 20 years to my own distress in those same mountains.

Unless you’ve been on your own backcountry trek this week, you’ve probably heard of Veatch’s harrowing tale. How she survived the plane crash that killed her step-grandparents, and how she relied on her grit and sound advice she picked up from reality TV shows to find her way out of the rugged North Cascades two days after the crash. She camped on sandbars. She navigated brutal terrain. She persevered.

Let me say: I’m no Autumn Veatch. Though hers started in much more dire circumstances, we shared many of the same harrowing experiences. And landscapes.

Looking back on it from this distance and safety, I’m lucky it turned out well. Mine was a desperate stumble over miles of wilderness—lost and alone—that started out the way it usually does, with equal doses of stupidity and arrogance.

I had hiked more than 15 miles into the remote Pasayten Wilderness of north-central Washington with two buddies, Mike and Jeff. The three of us had made a tradition out of this Labor Day trek. Each year, one of us would pick the destination, identify the trails, and plan the outing somewhere in the Northwest. The trip had only three requirements: it had to end at an alpine lake with spectacular fishing, it had to be off the beaten path, and it had to include at least three evenings, so each of us could wow the others with gourmet backcountry chow.

Our tradition had taken us up and down the Cascades, to Montana’s Mission Mountains, and out to Washington’s Olympic Peninsula. The Pasayten Wilderness trip was Jeff’s idea, and he mapped out a challenging loop that would take us across 5 days and more than 40 miles of hard backpacking.

I was all in, but the problem was: I had moved from Seattle to Helena, Mont., during the previous year, and I had a girlfriend. With a dog, named Ruby. And I recklessly agreed to take care of Ruby while my girlfriend was away on a work trip. I didn’t know Ruby well enough to take her on a backpacking trip, so I arranged with friends in Helena to care for her, but I agreed to come back early from my hike to take over dogsitting duties. I took my own dog, Baisha, to Washington, and explained to Mike and Jeff that I’d have to leave early from the hike.

Mike and Jeff rightly howled about this arrangement, but I was adamant. I had said I’d take care of Ruby, and I was bound by my promise. With this cloud hanging over our adventure, we drove separately to the trailhead so that I could head back to Montana the minute I came out of the wilderness.

The hiking was spectacular, through old-growth Ponderosa pine and along freestone mountain streams. Then we started climbing, and for miles we ground out the switchbacks. On the second night, we found ourselves so deep in the half-million-acre wilderness that we worried we might accidentally cross the international border into British Columbia. We arrived out our destination, a remote alpine lake tucked under a snowcapped peak that was eternally in the clouds. We caught the hell out of pan-sized cutthroat trout and ate them with fresh herbs and primavera pasta.

I was getting itchy. I was supposed to be back in Helena two days hence to take care of Ruby, and I recall that last night together how Jeff and Mike tried to talk me out of going. It would take me a full day to hike out, they argued, and then a full day of driving. Couldn’t my friends keep Ruby for another couple days? But I was dug in, and the next morning, after a somber breakfast, I decided I’d hike out, not by the trail we had taken, but by climbing the peak above the lake and dead-reckoning for the trailhead.

Jeff, especially, told me how stupid the idea was. We had only one map, and he tried to give it to me. But I told him how great my sense of direction was, about how all I had to do was gain the peak, and I’d just walk out the drainage on the other side. The trailhead was just at the bottom of the drainage, I said, as I pushed the map back into his hands.

My departure from the lake, with willing Baisha at my side, was pathetic. I wasn’t happy about going, and Mike and Jeff weren’t happy to see me go. But I stubbornly scaled the peak and refused to turn around to look at my companions catching more fish.

I’ll never forget the scene that greeted me when I finally reached the top of the rocky ridge. The other side wasn’t the clean drainage that would lead me home. Instead, it was a maze of primary and secondary ridges, false ridgelines that started strong and petered out, and probably 10 different drainages that radiated out like spokes off a hub. If I took the wrong drainage, I’d end up miles from my pickup. Or worse, in Canada, with no money or identification.

I should have taken my medicine and returned to the lake. Instead, I struck what looked like the most reasonable ridge, and hiked for half a day. It was a surreal experience. I cut tracks of a grizzly bear. I stumbled upon the shattered cache of a firefighters’ camp, with rusty Pulaski’s and other firefighting tools still embedded in the crates that had been airdropped on the ridge to fight a fire decades earlier.

Somewhere in the middle of that day, my gut told me I was headed the wrong direction. Maybe it was the sun, or the moss growth on the trees. But I had a long talk with my dog, who agreed that we needed to get off that ridge and start to find a drainage. The water will lead us to more water, and more water to a river. And in this country, the trails follow the rivers. We might be miles off course, but to stay on that ridge was to stay lost. I imagine Autumn Veatch having a similar discussion with herself.

So we started down. Some of the slopes were so steep I had to lower myself from tree to tree. Others were short-stopped by plunging cliffs. I’m not ashamed to say that Baisha saved me. She was always there, always a cheerful companion, someone to talk to and bounce ideas off of. Someone with whom to share my pitifully little food.

I fell and got skinned up. I got stabbed in the shoulder by a sharp limb. I ran out of water on a sun-baked scree slope. I cursed Ruby. But Baisha and I always went downhill, fighting our way down alder-bramble streams full of bees and spiders. The sun went down and my sweat-soaked body started to shiver. A little moon showed me the way.

It was well after midnight when I heard the river, the throaty rumble below me. And shortly after that I noticed that my boots were on flat ground. Unbelievably, within seconds of that realization, I spotted a chain-sawed stump that I recognized from our incoming hike.

I was found. Even though I had another 6 miles of trail in front of me, it was a cinch. I knew where I was, and all I had to do was put one boot in front of the other and follow both the trail and the water downhill. I reached my pickup just as the sun was rising.

I drove back to Helena with a mixture of gratitude that I had made it out of the Pasayten and guilt that I had left my companions. Ruby was happy—enough—to see me.

Was it worth it, that long days journey into night? I still think about how easily I might have stayed lost, or come out of the wilderness hundreds of miles from my destination. But, yeah, it was worth it. I celebrate my 19th wedding anniversary to Ruby’s owner in September.