We’ve a number of new turkey calls to share with you here at the Strut Zone, and a few follow... 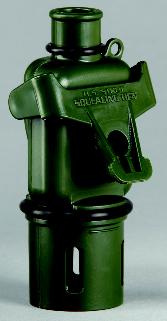 We’ve a number of new turkey calls to share with you here at the Strut Zone, and a few follow here. Stay tuned for more as spring seasons approach.

While attending the SHOT Show, I checked in with the H.S. turkey guys; specifically Matt Morrett and Eddie Salter. Like the rest of us, they’re stoked for the upcoming season. Here’s a new twist on an old favorite, and one that’s offbeat as traditional calling goes.

As you guys remember, last year H.S. introduced their so-called Ring Zone® technology to turkey calling. The Ring Zone calls, H.S. suggested, were the result of extensive scientific testing about how turkeys hear, and how the sound of a hen could be realistically reproduced. The result was the Ring Zone call; a pan call with a ring around it. Science meets turkey hunting and all that.

Now for 2010, they’ve used the new technology to produce their Li’l Deuce™ Ring Zone. The Li’l Deuce resonates at the same, specific frequencies of a turkey’s optimal hearing range, they say. The older model has been one of H.S.’s most popular calls over the years. It’s also a favorite of 5-time World Friction Calling Champion and H.S. Pro Staff member Morrett, who takes your faithful correspondent seriously enough to talk turkey, even after I whiffed on an Alabama longbeard he yelped into range years ago. (Sorry man.) I digress.

The Li’l Deuce Ring Zone is compact enough to fit into a shirt pocket, yet has plenty of volume to call long-distance birds. It has a slightly higher pitch as well, is available in both glass and slate versions, comes with a carbon striker, and sells for a suggested retail price of $15.95.

And now for something completely different . . .

According to H.S., and Eddie Salter, the new Squealing Hen Call reproduces the sound a hen turkey makes during breeding, triggering an internal response from gobblers to seek and find the source of the sound. Salter developed it, and says: “My family raised turkeys when I was a kid. Watching the behavior of our pen-raised birds helped me learn about turkey vocalizations. I heard the hen make the squealing sound during breeding, so I started experimenting with calling wild birds using the squeal. Now turkey hunters have an easy-to-use call that reproduces that same sound.”

The call is easy to operate, as Salter demonstrated. Simply blow into the call while depressing the lever. This puts pressure on the internal Infinity Latex® reed and the high-pitched breeding hen sound is produced. According to Salter, gobblers sometimes check out the sound, which appeals to both breeding and territorial instincts. He says the Squealing Hen can work in areas that have seen hunting pressure. He also suggests it’ll function as a locator call. The Squealing Hen sells for a suggested retail price of $21.99.

So what do you think, Strut Zoners? Looking for an upgrade on an old favorite, or something new and highly unusual to make that gobbler budge? If not, what’s your favorite go-to turkey call?