Is Radiation a Threat in the Pacific? 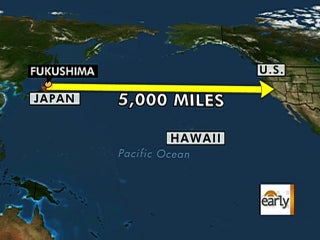 Tests conducted on March 29 showed that waters 300 yards outside the decimated nuclear power plant in Fukushima, Japan, contained 3,355 times the legal limit for the amount of radioactive iodine.

Needless to say, my hankering for sushi is at an all-time low.

This is the highest rate in the local ocean water yet, but the Japanese Nuclear and Industrial Safety Agency said that it did not pose any threat to human health because the iodine rarely stays in fish.

There is currently no fishing in the area because it is within the 18-mile evacuation zone around the plant. But who would want to fish there anyway?

And what are the long-term effects of this radiation in the water?

Not too many, say the experts. Radioactive iodine is short-lived, with a half-life of just eight days. It is expected to dissipate quickly in the vast waters of the Pacific. Also, this type of radioactive particle is not supposed to accumulate in shellfish or other fish.

Other radioactive particles have been detected in the waters near the plant, and some have definitively made their way into fish. Trace amounts of radioactive cesium-137 have been found in anchovies as far afield as Chiba, near Tokyo.

“We have repeatedly told consumers that it is perfectly safe to eat fish,” said Shoichi Takayama, who is an official with Japan’s fishery agency.
Regardless, several countries, including China, India, and South Korea, have ordered special inspections or outright bans on fish caught from areas near the Fukushima plant.

The US Food and Drug Administration has downplayed the risks of seafood contamination for the American market, due to the dilution of the radioactive particles in the ocean.

You’ll have to pardon my skepticism, but personally, I don’t find any extra radiation level acceptable. Sorry Red Lobster, but I’m switching to hamburgers and ribs for a while.