The Gomadic SunVolt portable solar power station was designed to provide the electrical power to charge your devices as quickly... 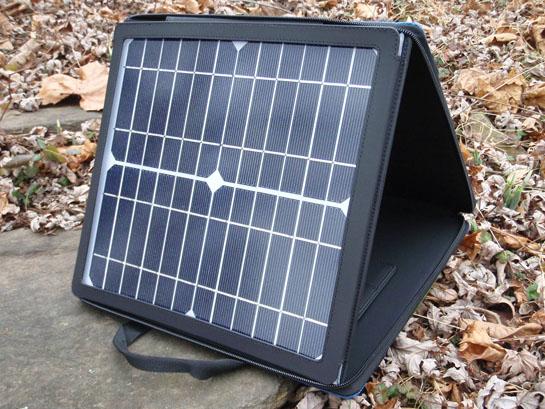 The Gomadic SunVolt portable solar power station was designed to provide the electrical power to charge your devices as quickly as a wall charger does in your home. This can be ideal in the event of an emergency situation where you require a power source, or in “off-grid” living situations such as campgrounds, hunting camps, cabins, sailboats, and homesteads.

But quick charging like this can be a tall order. Portable solar panels often fail to fully charge their attached battery or your devices in less than an hour, with some panels taking several hours to charge things. The SunVolt’s panel generates 10V of electricity under sunny conditions, which is powerful enough to charge your items directly or to charge Gomadic’s Solar Cache High Capacity battery (which is sold separately).

After a week of charging electronics with this panel, I found that it’s comparable (but not quite the same) as plugging my electronics it into the wall. While bigger and heavier than I would like the panel to be, it far exceeded my expectations. The SunVolt charged an iPad in one hour, and my cell phone in 45 minutes. These devices charged in same amount of time it takes when plugged into the electrical outlet. It won’t charge a laptop, but it will charge just about anything that requires 5.5V or less–including digital cameras, Bluetooth headsets, GPSes, mobile hotspots, and tablets.

Electric company be warned, I say!

Here are details on the Gomadic SunVolt:
– Dimensions: 12×13 inches with case closed, 12x13x12 inches open
– Weight: 4 pounds 10 ounces with battery, charging cables, and case
– Charge time: Under optimal conditions, the panel will charge devices at the same speed as a wall outlet.

The SunVolt panel sells for $100. You can also get a high-capacity battery pack for $40, a car power port adapter for $15, and a digital camera battery charger add-on for $20.

The Gomadic Sunvolt comes in a lightweight water-resistant carrying case with non-slip strips, which doubles as the stand to hold the panel up at the right angle for sunlight to hit it. This case makes the system highly portable, while still keeping it protected. And all this is no bigger than an older model laptop.