Although avalanches can occur at any time in snowy, mountainous terrain, late winter and early spring are particularly dangerous times.... 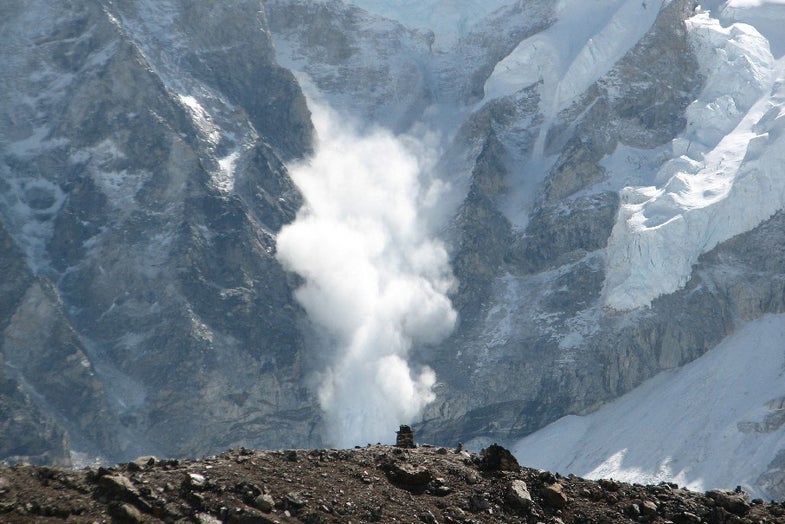 Although avalanches can occur at any time in snowy, mountainous terrain, late winter and early spring are particularly dangerous times. Daily freezing and thawing, additional snow loads, and warmer days followed by cold ones can all create the conditions for avalanches both large and small. This threat shouldn’t stop you from enjoying your favorite outdoor winter sports, but it should be on your radar as a potential danger. Here’s how to spot avalanche zones and what to do when caught in an avalanche.

1. Spot An Avalanche Zone
How do you deduce that you’re in an avalanche area? There are many signs that can help you avoid becoming a human popsicle. Two of the biggest issues are recent heavy snowfall and the mountain’s incline.

Avalanche risks increase after a heavy snowfall. The worst time of all is when snowy weather is followed by warm weather or rain, and then cold, snowy conditions return.

The angle of the mountain slope is also a major player in this deadly game. Most avalanches occur when the slope is 30 to 45 degrees, but even slopes of 25 or 60 degrees can slide if the conditions are right. Finally, evidence of previous avalanches should set off a red flag when you start noticing broken trees and other obvious destruction.

2. Gear Up
If you’re intrepid enough to spend time in areas with unstable snow, an avalanche beacon is an indispensable piece of gear. Turn the unit on, set it to transmit, and strap it around your waist and over a shoulder under your coat. Let others know your plans prior to heading out. If you end up buried in the snow, rescuers can pick up your signal and they’ll know where to start digging.

3. Swim Through An Avalanche
Snow doesn’t exactly move the same way water moves, but there are similarities. If an avalanche breaks loose under foot, try your best to stay on top of the snow and get to the edge of the avalanche. If the snow is moving slowly, try to catch hold of a tree without getting crushed against it. In a fast-moving slide that knocks you off your feet, swim in the snow and try to avoid hitting stationary objects.

4. Buried Alive
Being buried under the snow is not an enviable position. But it doesn’t have to be a fatal one. Once the snow stops moving, it turns from a fluid material to a cement-like consistency. Work quickly to dig your way to the surface as the slide slows. If you’re disoriented and not sure which way is up, let gravity help: Dribble some spit out of your mouth and see which way the drool rolls.

If possible, shove one arm toward the surface and move it around to create an air shaft. Use your hands to carve out a breathing space. Work methodically to avoid exhaustion. Conserve your breath by waiting to shout until you hear rescuers above you.

Have you ever been at the scene of an avalanche? Would you be ready if caught in one? Leave us a comment below.