Weather Survival Skills: How to Survive a Major Hailstorm

One of the scariest elements to a thunderstorm can be the hail it might drop on your neighborhood. The biggest... 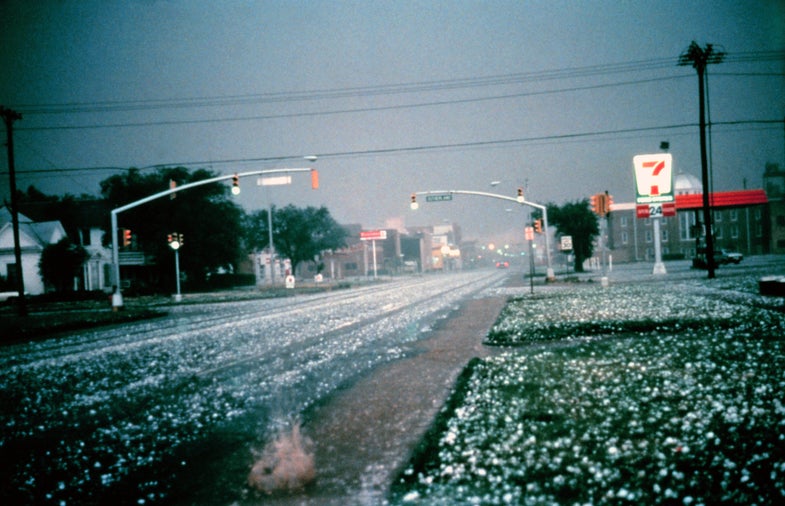 One of the scariest elements to a thunderstorm can be the hail it might drop on your neighborhood. The biggest hailstone ever recorded in the U.S. came from a storm in South Dakota in July, 2010. It was 8 inches in diameter, weighed nearly 2 pounds, and had a circumference of 18.6 inches. Hail tends to do more property damage than killing, though deadly freak hailstorms have occurred throughout history. On a day that became known as “Black Monday” in 1360, a hail storm killed approximately 1,000 English soldiers near Paris during the Hundred Years’ War. And in the 9th century, near the town of Roopkund, India, several hundred pilgrims were killed by a massive freak hailstorm.

Where does hail come from? The pellets of hail form when strong currents of air (called updrafts) carry water droplets to a height where they freeze. When the hail “stones” gather more moisture and grow too big to be supported by the updraft, they fall to the ground as speeds up to 100 mph (161 kph). Yes, this form of heavy weather can kill, but dealing with hail is not that difficult, if you follow the steps.

STEP 1
Seek shelter during all thunderstorms, and you’ll generally be sheltered from the hail as well.

STEP 2
Get away from windows and skylights. If the hail is falling on an angle, it could shatter the glass and leave storm spectators badly cut.

STEP 3
Stay in your shelter. Even if it’s just a car, stay underneath a roof. It may sound scary inside a car with hail pelting the roof, but it’s far scarier to be outside with no cover.

STEP 4
If you have no shelter at all, cover your head with your folded arms and crouch. Protect your skull and spine with anything available. A backpack, a book, a slab of bark, or anything else that will shield your head and spine from direct hailstone strikes.

Have you seen hail already this year? Tell us about your freaky weather by leaving a comment.