Celebrate Your Freedom and Your Fourth by Fishing Like George Washington 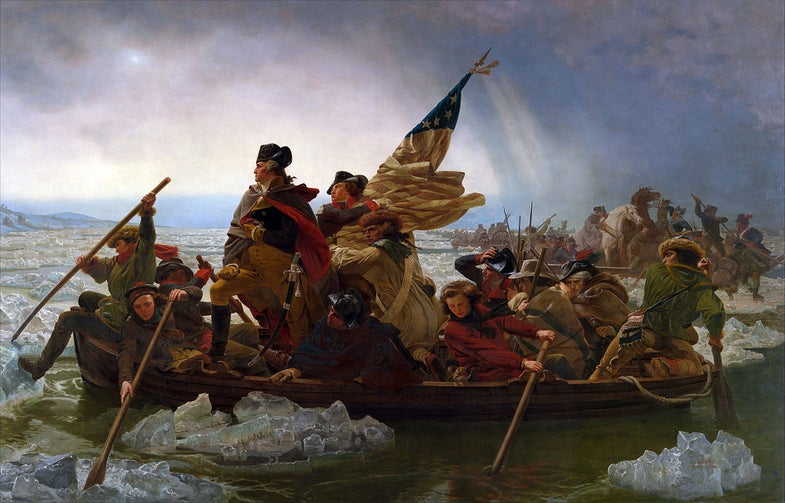 Want to know the most patriotic way to celebrate July 4? Go fishing on your public waters. Be like George.

George Washington celebrated his freedom, his new nation, and tried to patch up embittered relationships among patriots. By fishing.

I thought of Washington on my recent July outing, casting an elk-hair caddis for brook trout on an obscure Montana stream. Nearest thing I saw to a crowd was a herd of 25 cow elk, with a dozen, month-old calves barely visible over the top of the grass.

Washington knew elk—they roamed Virginia in his day. And brookies too. And he loved fishing since childhood.

My head was full of the rhythms and rhymes of the 2015 Broadway musical Hamilton as I kept the river below the top of my waders. Lin-Manuel Miranda’s musical makes no mention of fishing at all. But history books do.

The musical is based on the deep-seated conflict between Alexander Hamilton and Thomas Jefferson. Both men served in Washington’s first cabinet, despising each other more as time went on.

Trying to settle this rancor, Washington took Hamilton and Jefferson fishing at Sandy Hook, New Jersey. The magic of fishing only goes so far. Of the three, only Washington caught fish. Later on, Jefferson ran for president on his own accord, splintering off from Washington. Hamilton died in a duel with Aaron Burr in 1804. Some 200 years later, this all became a hip-hop phenomenon on stage.

If Jefferson and Hamilton had become fishing buddies, Broadway would have been deprived a big hit.

That is how my brain wandered, anyway, as trout after trout ignored my fly.

Washington’s enslaved people fish commercially for him at Mt. Vernon, netting shad from the Potomac for his profit. Freed from such labor, Washington often fished recreationally with his friends and brothers, riding on horseback and sleeping under the stars.

“Throughout his life, George remained a ‘sportsman’ in the classic sense of the word,” wrote historian Philip G. Smucker.

I imagine Washington would approve of the millions of Americans who today celebrate July 4 by fishing, camping, and living the vigorous life out-of-doors. I hope he would appreciate that today the descendants of the Native Americans he fought and the African-Americans he enslaved have the right to use America’s public lands, too. The outdoors should be one of the most democratic aspects of American life, thanks to our foresight to protect 640 million acres of as national forests, parks, and wildlife refuges.

Back in that Montana trout stream, a 14-incher leaped out of the water to snatch a bug from an alder that dangled above the bank. I sent a fly its way, but only tangled in a branch.

I suppose that even Washington saw some get away.