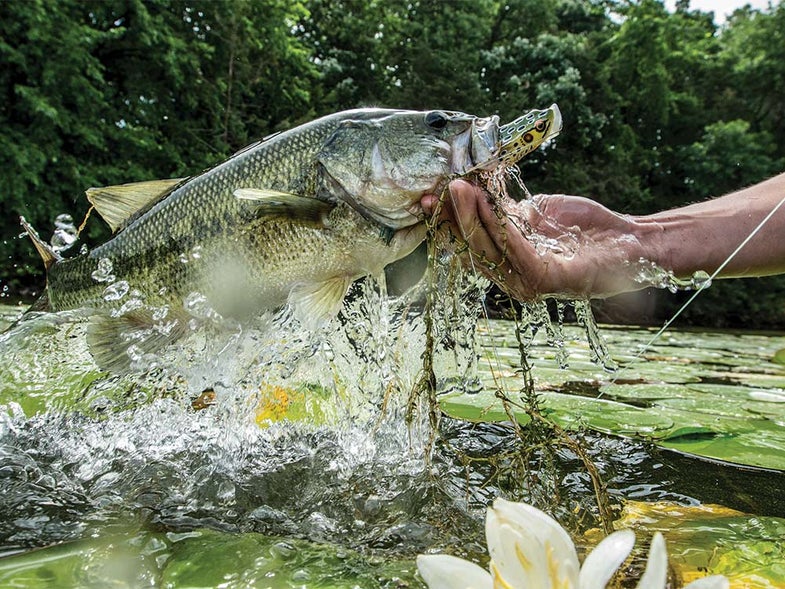 Texas bass pro Zell Rowland fished his first BASS tournament at the age of 13. In every tournament since, regardless of where in the country he was fishing, there has been a topwater lure rigged and ready on the deck of his boat. Now on the other side of 60, Rowland still lives his life according to one basic truth: “If I can get one to bite on top, I’m happier.” His dedication to this truth has earned him the nickname “Topwater Technician.”

Every style of classic topwater has its strengths and weaknesses, and over the years, Rowland has developed systems for maximizing success and minimizing heartbreak with each one. Follow these simple rules and you’ll be boating more trophies up high.

Problem: The most common error anglers make when running poppers is not varying their cadence enough. If fish are short-striking, or just coming up and looking at the popper, it might be the profile or color that is distracting them, but it’s more likely you’re not using the right combination of pulls and pauses.

Solution: “I usually start with two pops and then let it sit, then three pops,” he says. “Sometimes, if I see bait moving on the surface, I’ll hold my rod in the air and reel it steadily and jerk it without stopping.” Often bass can be patterned by the precise movements that trigger a strike, but remember that the clearer the water, the faster you’ll often have to move a popper to keep them from getting a good look at it.

Problem: Although walking baits can elicit big bites, Rowland believes anglers often overpower them with line that’s too heavy. “Of course, we would all throw 20-pound line if we could,” he says. That may be fine on some big-fish factories with heavy timber, or on the rare occasions when fish aren’t picky about motion, but in most scenarios, heavy line will turn off fish.

Solution: “My basic rule of thumb is that the lighter the line you use with a Spook, the more action you will get out of that bait,” Rowland says. “I usually rig one on 14-pound and one on 17-pound and see which one gets more bites.” In extremely clear water, Rowland will downsize even further to 12-pound line.

Problem: While Rowland believes that a buzzbait is one of the easiest baits to fish because all you do is throw it out and reel it back steadily, he also contends that the biggest mistake anglers make is they don’t use extreme speeds. Speed is a trigger, but the trick is knowing when to give it gas and when to hit the brakes.

Solution: “There are only three ways to fish a buzzbait,” Rowland says. “Slow, medium, and fast. My slow is usually slower than slow, and my fast is faster than fast.” He adjusts the blades to maximize impacts at various speeds. Cupping them inward helps the blades grab more water so it works effectively at a snail’s crawl; opening the blades up reduces water resistance when he wants to burn his buzzbait.

Problem: Hollow-body frogs call giants out of the nastiest cover, but that call often ends in nothing more than a roll of the bait or, worse, a missed connection. Giving a fish enough time to compress the lure’s body ­before swinging takes practice, ­patience, and willpower.

Solution: “Frogs work in places that other topwaters don’t,” Rowland says. “You just have to make sure you’re using the right frog.” He believes the best way to counteract fish that engulf the frog but don’t get hooked is to make sure the body of your chosen frog is extremely soft. The more rigid the plastic, the more difficult it is for the fish to compress and expose the hooks for a positive connection.