Hunting Scenes Are No Longer Required for Duck Stamp Artwork 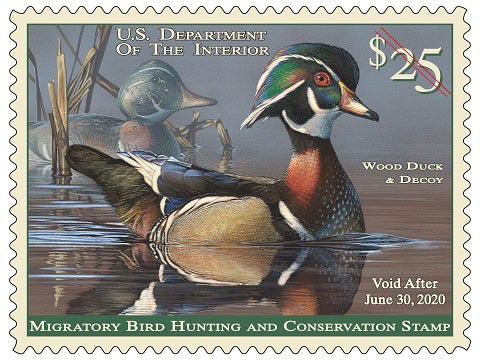 New Federal Duck Stamp artistic guidelines have been adopted by the USFWS.
SHARE

A revision in guidelines for Federal Duck Stamp submissions has removed a key requirement. No longer will artists and illustrators need to adhere to a theme of “celebrating our waterfowl hunting heritage,” says the U.S. Fish and Wildlife Service (USFWS), which adds that the change will give “artists more flexibility when designing their art, and broadens the appeal of the Duck Stamp to a more diverse audience.”

The USFWS announced this rule will go into effect beginning with the 2022 Federal Duck Stamp contest. The requirement for a hunting image as part of the Duck Stamp came from former Trump administration Interior Secretary Ryan Zinke.

Many hunters supported the artwork change, but it resulted in a lawsuit from Friends of Animals.

The USFWS explained that the stamp’s hunting theme requirement was unsatisfactory to “many stakeholders and artists” who had continued to express their dissatisfaction with the hunting element being mandatory for all entries to the Duck Stamp contest.

The Federal Migratory Bird Hunting and Conservation Stamp—known as the Duck Stamp—is required to be purchased by all waterfowl hunters in the U.S. The cost per stamp is $25.

Countless birds, mammals, fish, reptiles, and amphibians benefit from habitat protected by Duck Stamp revenue, including an estimated one-third of the nation’s endangered and threatened species.

Waterfowl hunters have been the greatest contributors to the program, though collectors, bird watchers and other non-hunters also purchase stamps to contribute to conservation or for the stamp’s artistic value.

Read Next: Is the USFWS Low-Balling the Total Number of Duck Hunters in the U.S.?

“Given the outsized impact waterfowlers have on the program, a nod to the significant conservation investments made by hunters makes perfect sense,” Wiley said in an email to the WSJ. “Under this rule change, artists should feel encouraged to continue showcasing the stamp’s hunting heritage, but have the flexibility to express North America’s most vibrant and beautiful waterfowl in whatever manner feels most natural.”

The contest’s rules still require the portrayal of one of five species of waterfowl designated each year. Hunting scenes in Duck Stamp art, such as decoys and blinds, are now optional.