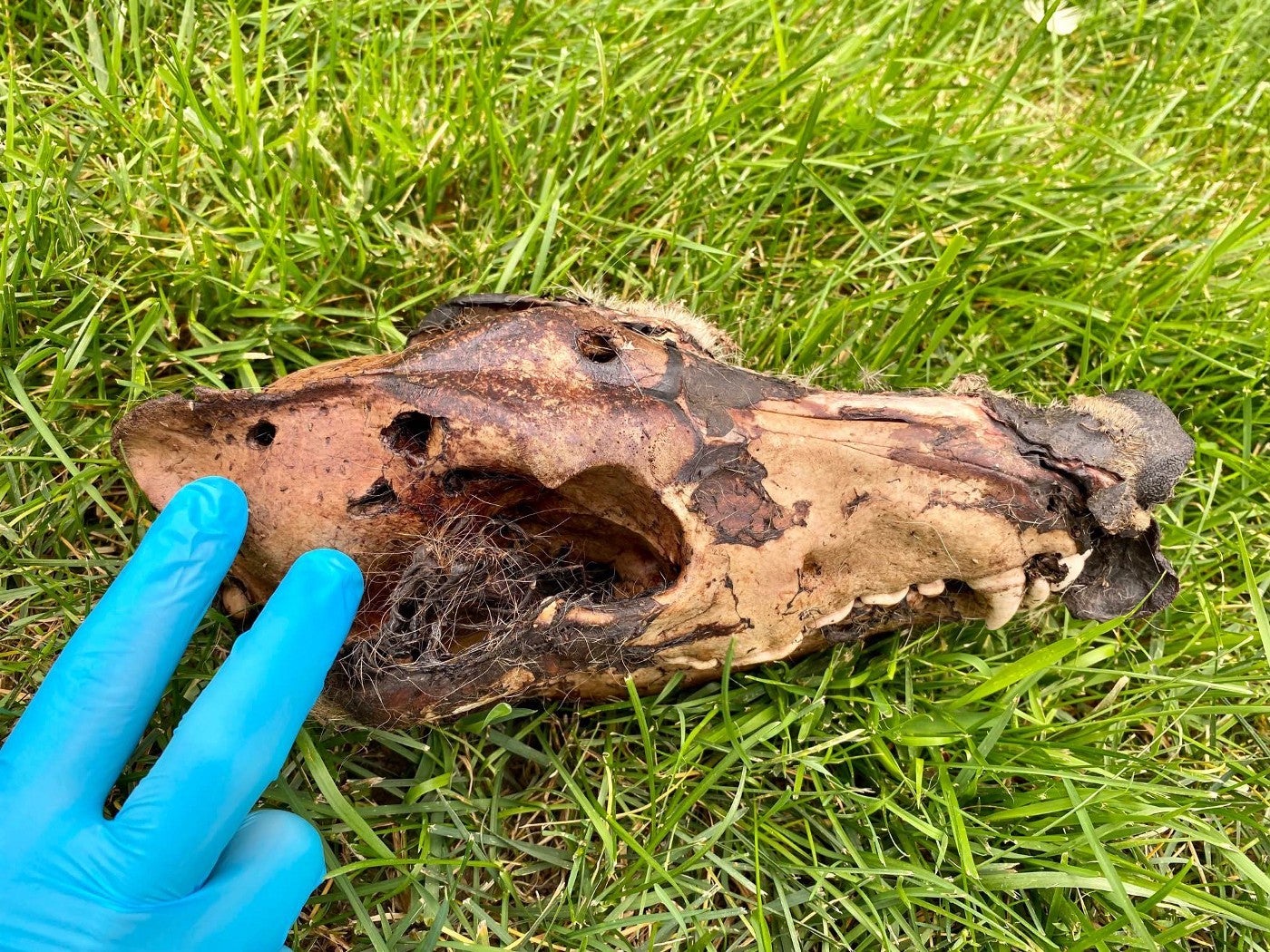 A biologist points out holes in the wolf's skull that were made by feline teeth. WDFW
SHARE

Mountain lions and gray wolves are both considered apex predators in Washington State, but a growing body of evidence shows that when the two species face off in a fight, the cougar usually comes out on top. Wildlife officials with the Washington Department of Wildlife recently came across a wolf that had been killed by a cougar, and they say it’s at least the fourth time this has happened since 2013.

“People often talk about wolves being at the top of the food chain when it comes to carnivores, or that they are ‘apex’ predators,” WDFW writes in an article published Wednesday. “Although that is accurate in some cases, in Washington, we are seeing a phenomenon that has been relatively uncommon in other states.”

This summer, WDFW officials found evidence that a mountain lion had killed a wolf in the state. As part of their efforts to track the Dominion wolf pack, biologists had fitted one of the wolves in the pack with a GPS collar. When that collar sent a mortality signal, which happens whenever the collared animal stops moving for an extended period of time, WDFW wolf biologist Trent Roussin headed out to investigate. He eventually found the collar still attached to the dead wolf.

“From all the signs at the site, it appears the wolf was attacked while traveling down an old overgrown logging road, with the fight ending about 100 yards downhill,” Roussin said.

Roussin then performed a necropsy on the dead wolf and noticed distinct holes in the wolf’s skull, indicating that “it was pierced by strong feline teeth.”

WDFW has documented at least three other instances of collared wolves being killed by cougars since 2013. This makes the Evergreen State an outlier compared to other Western states that are home to both species.

“That’s more than has been documented in the entire Northern Rocky Mountains in twice as much time, despite that being a much larger area with many more wolves than Washington,” the agency writes. “And it is likely there are more cases that we don’t know about.”

The agency found another lion-killed wolf this September, when U.S Forest Service employees informed WDFW of a moose kill in Stevens County, which is home to the Smackout wolf pack. Roussin investigated that kill site as well, and the first thing he found was a full-grown wolf carcass next to an already-consumed cow carcass. He saw that the adult female wolf had a broken leg, and he found a second, smaller carcass nearby that turned out to be a wolf pup.

“Roussin believes that the adult female wolf was killed by the moose as the pack tried to take down their kill,” WDFW explains. “Even after that wolf was killed, the rest of the pack stayed and was feeding on the moose when a cougar came in and may have killed the wolf pup while attempting to claim the moose carcass.”

Why Cougars Have the “Upper Paw”

The ranges of gray wolves and cougars overlap throughout much of North America, and they generally target the same prey (primarily moose, elk, and deer). This creates a certain level of competition, and it’s more likely that cougars “are not so much hunting wolves as competing with them,” WDFW explains.

This competitive dynamic helps explain the September incident, which involved a mountain lion fighting with wolves over a kill. The case of the collared wolf that was killed on a logging road this summer is less cut-and-dry, however, and it’s possible that the cougar actually ambushed the wolf, according to the agency.

Unlike wolves, which travel and hunt in packs, cougars are solitary predators. This gives the big cats a distinct advantage over the canines when it comes to one-on-one combat. Cougars also have a leg up on the defensive side because of their climbing abilities. Even if a wolf pack tried to attack a lone mountain lion, the cat could easily get away by climbing a tree and staying well out of reach of the wolves.

“Most of the time you don’t think of cats being able to out-fight dogs,” WDFW explains. “[But] when a cougar successfully ambushes a wolf traveling alone, the fight can be very short, with the cat finishing it with a quick bite to the head.”