Four Endangered Whooping Cranes Were Killed Mysteriously in Oklahoma. The Case Could Prevent a Sandhill Crane Hunting Season in Wisconsin

Crane advocates are pointing to the Oklahoma poaching incident as proof that sandhill hunting puts whooping cranes at risk. Hunters and game wardens in the state have a different take 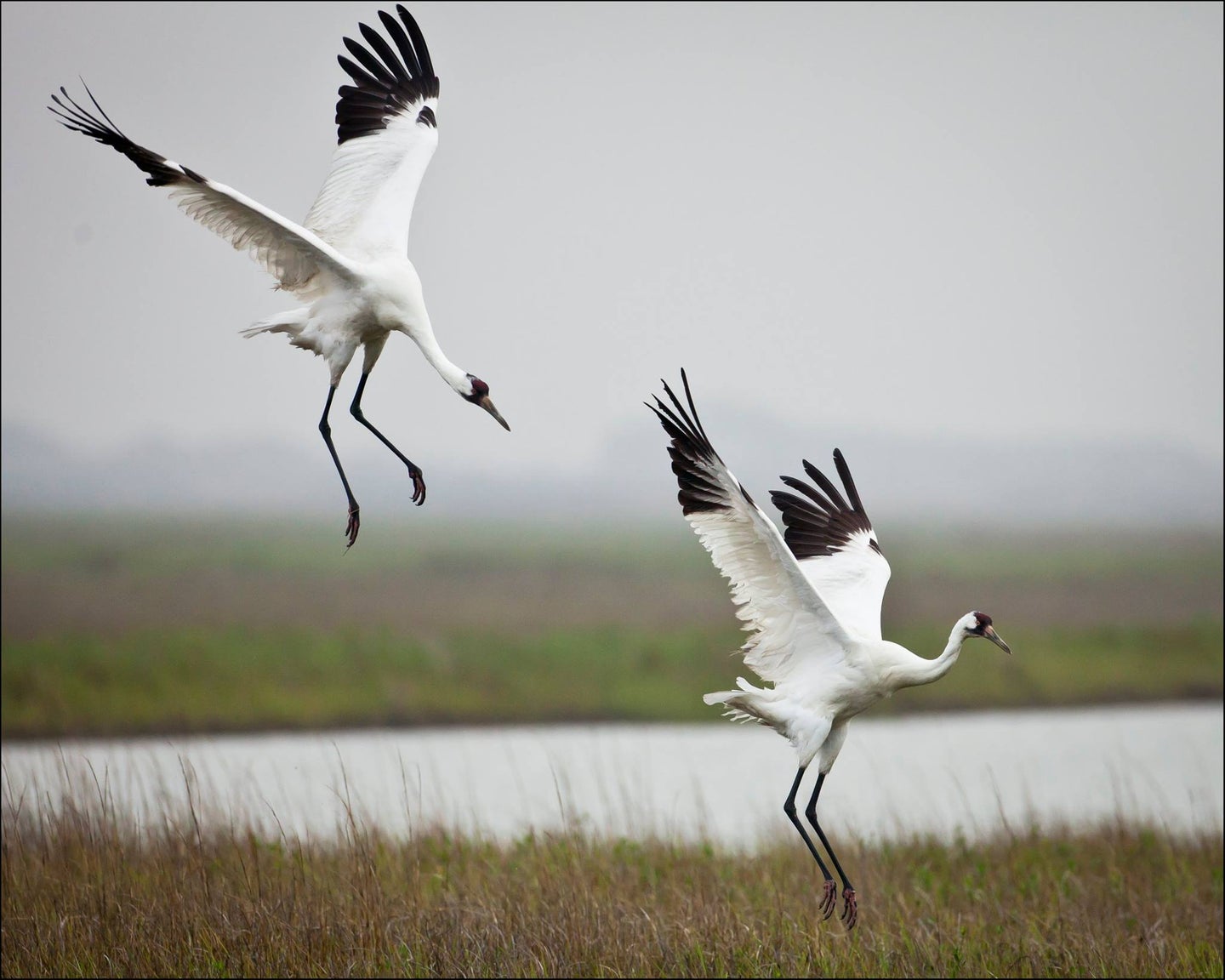 Four whooping cranes were shot and killed in Oklahoma last November, and wildlife officials in the state are still trying to figure out who did the shooting and why. Diane Nunley / USFWS
SHARE

Game wardens in Oklahoma are still trying to get to the bottom of an incident involving four endangered whooping cranes that were shot and killed near the Tom Steed Reservoir in Kiowa County in November 2021. In the weeks following the discovery, news outlets and endangered species advocates speculated that the birds might have been shot by hunters who mistook the whooping cranes for sandhill cranes—which were in season in Oklahoma at the time. After weeks of investigation, however, and with the benefit of hindsight, one thing has become sufficiently clear to authorities: This incident does not seem like a case of mistaken identity by law abiding hunters, and whoever shot the whooping cranes likely did so intentionally.

Although law enforcement officers believe the birds were shot on or around Nov. 5, game wardens with the Oklahoma Department of Wildlife Conservation weren’t notified of the incident until Dec. 6, when a hunter found an injured crane in an agricultural field. The wardens tried saving the bird, but it died while being transported to a veterinary clinic. A search of the area days later revealed three more dead whooping cranes, and wildlife officials quickly determined that all four birds had died from shotgun wounds.

Whooping cranes are one of the rarest birds in North America. Current estimates put the entire population between roughly 500 and 700 birds. And when you’re dealing with a species that mates for life and doesn’t reach sexual maturity until four to seven years old, every bird is significant.

“We are angry and heartsick,” Rich Beilfuss, president of the International Crane Foundation, told The Oklahoman in early December. Beilfuss added that, to the foundation’s knowledge, four whooping cranes are the most ever killed at one time in a poaching incident.

The International Crane Foundation, which is headquartered in Baraboo, Wisconsin, is also a vocal opponent of Wisconsin’s Senate Bill 620, which would establish a hunting season for sandhill cranes in the state. That legislation, introduced in October of last year, has garnered wide support from hunters in the state, who say the eastern sandhill crane population is stable enough to sustainably support regulated hunting seasons.

Groups like the Wisconsin Waterfowl Association point out that, according to the U.S. Fish and Wildlife Service, there are nearly 100,000 eastern sandhill cranes, and Wisconsin hosts the largest breeding population of any state in the Mississippi Flyway. The state’s farmers are backing the bill as well, as they suffer the greatest impacts from a growing sandhill population, and contend that managed hunting would help tamp down on the amount of crops that sandhills destroy every spring. Meanwhile, groups like the Sierra Club and the International Crane Foundation are still pointing to the Oklahoma poaching incident as proof of why sandhill hunting should not be legalized.

“We don’t know who did it yet…but we do know that it was during a sandhill crane hunting season in Oklahoma,” Beilfuss said in an interview with Wisconsin Public Radio earlier this week. “So, it is sort of our worst fear when these birds are shot by mistaken identity during some other hunting season.”

The question, then, is whether it’s reasonable to assume that these birds were shot because of mistaken identity. According to two experts on the subject—an experienced sandhill crane hunting guide in Oklahoma and a longtime local game warden—the answer is: No, probably not.

“It had to have been done intentionally,” says Bryan Baker, owner and operator of Cranewreckers guide service in northern Oklahoma. “There’s just no way you can get the two confused. Completely different sizes, and one is bright white while the other is gray. The odds of mistaking one are almost astronomical, and for them to mistakenly shoot three others—that just doesn’t seem possible.”

Baker has been guiding for sandhill cranes in Oklahoma for the past 12 years. He and his guides hunt the birds nearly 90 days a year, and he says that he has never seen one instance where a whooper was mistaken for a sandhill. Baker also points out that since most modern shotguns can only hold three shells and that shotguns must be plugged if they do have a greater capacity, there had to have been another shooter involved. “One person does not have the ability to shoot four cranes with three shots [if he’s hunting legally],” he adds bluntly. It’s also possible that a single poacher intentionally reloaded and fired again.

Lt. Col. Wade Farrar, the assistant chief of law enforcement for ODWC, says the incident is still under investigation, and that the agency can’t answer the question of mistaken identity for sure until the perpetrator or pepetrators are questioned and brought to justice. But he does have a pretty strong hunch that the four whoopers were not shot by hunters by mistake.

“It would be pretty hard for an actual crane hunter to misidentify a whooping crane as a sandhill,” Farrar says. “They’re obviously way different looking, and I don’t think this was a case of misidentification.”

Read Next: A Louisiana Police Officer Was Cited for Poaching From a Patrol Car

He also mentions that if it was that easy to mistake a whooper for a sandhill, the agency would probably see these cases of mistaken identity on a more regular basis.

“We’ve been hunting cranes for a long time [in Oklahoma],” Farrar says, “and this is the first time that this has ever happened that we know of.”

ODWC’s investigation will continue, and Farrar explains that the agency is currently waiting on warrant returns before it can move forward with the case. If the investigation leads to someone being charged with the crime—and that’s still a big “if” at this point—the shooter(s) will face harsh penalties. Killing a whooping crane can lead to one year in prison and $100,000 in fines under the Endangered Species Act, along with an additional $15,000 in fines and up to six months in jail under the Migratory Bird Treaty Act.