"There was no intention to harm the deer, as it was just a broom, not a battering ram." 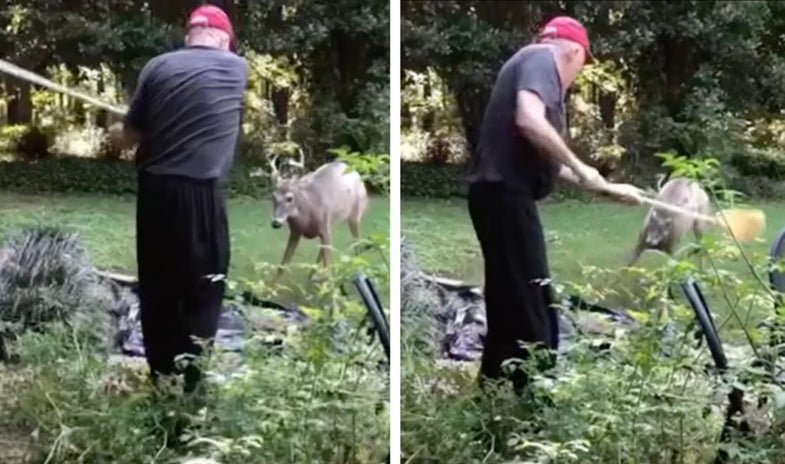 A Georgia man received stitches this week after facing off with a young buck that had become habituated to humans. The Georgia Department of Natural Resources posted a nine second video clip to its Facebook page of the deer charging a Newton County resident.

The video shows an unidentified man standing on a back deck, swatting at the whitetail with a broom. Before the video began recording, a resident heard “a loud commotion” when the deer head-butted their grill. The resident attempted to “yell at the buck to frighten it off (which should have been more than enough), but the buck paid the resident no attention and went back to ramming the grill.” The DNR reports that a second resident came out with a broom to help shoo the buck away.

“Enter broom guy (let’s call him George),” the longwinded DNR post continues. “George (who has NO knowledge that this deer has been illegally hand-raised) came out to help shoo the buck away, and brought a broom with him. THERE WAS NO INTENTION TO HARM THE DEER, AS IT WAS JUST A BROOM, NOT A BATTERING RAM. George first attempted to yell at the buck and wave the broom high in the air to scare the deer, but again the buck paid him no mind and continued using his sharp, hardened antlers on the resident’s grill.”

The buck doesn’t take kindly to the boom in its face. The animal stands with his head lowered and cocked, in a classic rut-like posturing position. The buck’s behavior is more characteristic of the rut, but as the DNR points out, the deer had been hand-fed by other residents—not “George”—which is against the law in Georgia.

Then the buck charges the man, pushing him back toward the house. “George” stumbles, falls, and the buck gores the man off-camera. The videographer appears to fall too, in their attempt to help the man. Eventually the buck left and “George” spent the next eight hours in the emergency room, where he received stitches in his forearm.

The DNR’s post has racked up nearly 500 comments, many critical of the man’s tactics.

“Ok, I know this gentleman,” writes one commenter. “He is an avid hunter and very good at it. He was trying to help a neighbor, and didn’t know this was a ‘tame deer’ scenario. His wife was videoing, and obviously once the deer attacked, her priority was not on the camera.”

Other residents were familiar with the deer, which had been hand-fed since it was a fawn.

“As a growing fawn, the act of feeding and interacting with this deer seemed harmless. However, as the buck matured, the testosterone kicked in. As testosterone levels rise, antlers mineralize and harden and bucks increase their sparring frequency and intensity to establish dominance and breeding rights. In the wild, deer ensure their distance from humans. Once that fear of people has dissipated, however, an aggressive, testosterone filled buck can become extremely dangerous. Unfortunately, we see situations such as this occur every year,” the DNR post concludes, noting that a license is required for rehabilitating wildlife. “In Georgia, it is ILLEGAL to keep wild deer as pets. Habituating and humanizing deer has serious and dangerous consequences for both humans and the animal. Far too often, fawns are illegally hand-raised after being mistaken as orphans because of does’ natural behavior of leaving them for extended periods of time. While well-intended, the improper care of a wild animal often results in an early death or a life in captivity.”