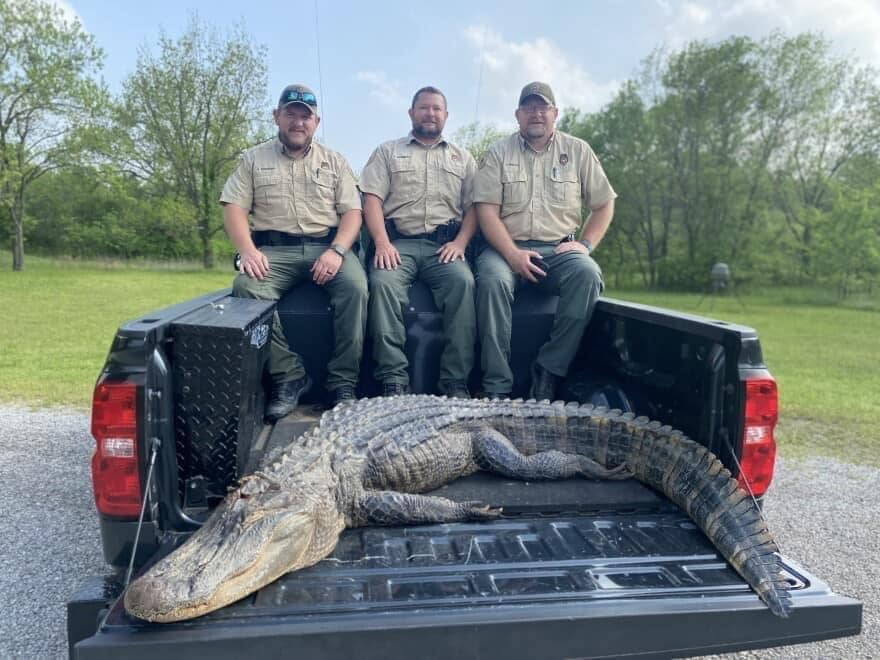 Game wardens with the Oklahoma Department of Wildlife Conservation recently shared a photograph of the nearly 10-foot alligator they caught in Claremore Lake last month. Officials are still trying to figure out how the alligator ended up in the lake, which is located in the northern part of the state and well outside the species’ native range.

The agency explained that after receiving multiple reports about the gator from members of the public, game wardens came out to the lake in May and successfully trapped the alligator. The gator was then euthanized because it was considered a threat to public safety.

ODWC’s Assistant Chief of Communications Micah Holmes spoke with Tulsa’s Channel 6 News about the alligator on Friday. Holmes touched on the alligator’s mysterious appearance at Claremore Lake and explained why the agency decided to lethally remove the gator.

“We really don’t know where this alligator came from,” Holmes said. “We do have gators in Oklahoma, but only in the far southeastern corner of the state in McCurtain County. Our suspicion is that it came from somebody who had it—maybe as a pet—and then released it, but we can’t say [for certain] where it came from.”

Holmes explained that they wouldn’t expect an alligator to be able to survive the long, cold winters of northern Oklahoma, which means it likely wasn’t in the lake for very long. He said that even if an alligator miraculously survived one or more winters on Claremore Lake, it wouldn’t be able to reach such a large size in those conditions.

Holmes added that euthanizing alligators and other animals is not typically the agency’s first course of action. But they believed this particular alligator was habituated to humans, and that trapping and releasing it in another location could have put the general public at risk.

“In this situation, the animal was so large, and it’s just not realistic to try to get your hands on a nine-and-a-half-foot alligator. It could have posed risks to the public,” he said. “We want to keep the public safe, keep our officers safe, and keep the animal safe—in that order. And that’s how we work through those decisions.”

Other Rare Alligator Sightings in West Texas and Central Arkansas

Recently, an alligator was captured on video in central Arkansas, far north of their normal range in the state. Another rare alligator sighting occurred last month in West Texas, when one of the large reptiles was spotted at a trailer park in Midland County. Photos shared by the Midland Sheriff’s Office show the gator being found and trapped underneath someone’s car. The alligator was then turned over to a local veterinary clinic for rehabilitation.

An American Alligator in Midland County! 🐊

Today, The Midland County Sheriff’s Office responded to a call around 12:22 pm at Airline Mobile Home and RV Park.

The complainant found the alligator under his car. The Alligator was safely “taken into custody”. pic.twitter.com/3jDilxLUvU

Deputies there were just as stumped as to how the alligator could have ended up in such a dry environment hundreds of miles from the bayous of East Texas. Although they will occasionally travel up major rivers to cities like San Antonio and Austin, finding an alligator halfway between Fort Worth and El Paso is basically unheard of. This led them to believe that the gator was likely a recently escaped pet.

“We’re hoping a possible owner calls to claim our friend that’s obviously lost in the desert,” the sheriff’s office wrote on Facebook.

It is illegal to keep live alligators as pets in both Oklahoma and Texas. Texas allows people to raise gators in captivity for commercial purposes, but only if they have an Alligator Farmer Permit from the Texas Parks and Wildlife Department.