A Shipwrecked Cargo Freighter Is Leaking Oil Into the Atlantic Ocean

Oil is spreading into the waters off the coast of Georgia, and washing up on local beaches 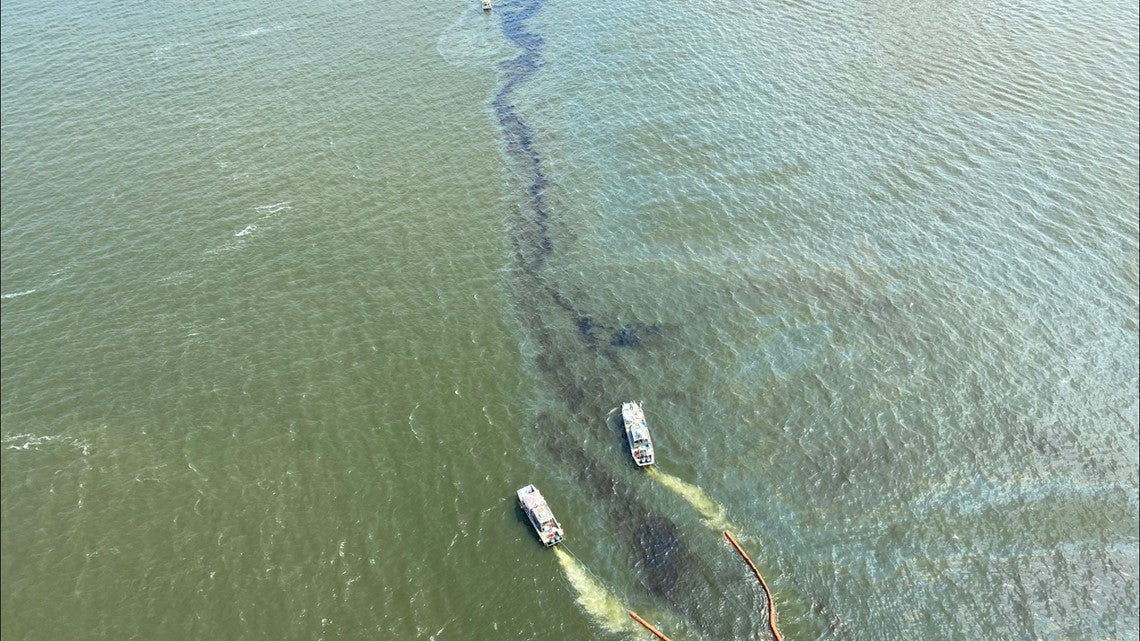 In 2019, the 656-foot cargo ship Golden Ray capsized in St. Simons Sound, east of the port of Brunswick, Georgia. Loaded with 4,200 automobiles, a crew of 24, and full of fuel, it spilled oil into the Atlantic Ocean. Crews have been removing sections of the ship since last year, but on July 31, the grounded ship began to leak oil again and it’s washing up on nearby beaches.

There is a protective barrier around the ship to stop oil from leaking out, but tides shifted and some of that oil was swept underneath the barrier according to spokesman Michael Himes in a story published by Fox News. The discharge occurs when workers try and lift a section of the wreckage.

“We’re very concerned, when we see impacts like this. It’s fair to say this is what we would call a worst-case scenario. These are the kind of the scenarios that we plan for well in advanced before we start removing the ship and even when you have all the infrastructure and personnel in place you can still learn things about the environment,” Himes said.

Capt. Greg Hildreth, a veteran fishing guide, says he can still go and catch plenty of fish in local waters, but he’s got to run farther and work harder to put his clients on seatrout, redfish, flounder, tarpon, and other species.

Instead of fishing in local St. Simons Sound, Hildreth and crew must run north to Altamaha Sound or south to Cumberland Sound to catch fish.

“It’s not natural, this oil in the St. Simons marsh and water, and it’ll take a long time for this to heal,” he said. “It’s going to affect everything here – shrimp, oysters, crabs, all the fish species. And I’m most worried about years that follow after the ship is gone, but the oil spill effects are still here.”

Hildreth says that when the ship capsized in the fall of 2019 and oil spilled, it was at a critical time of year for southeast Georgia fisheries.

“Redfish are making their push inshore for spawning then, and lots of larval forms of marine life – including fish – are in the tidal mix,” Hildreth says. “I believe that first spill in 2019 impacted at least an entire year-class of marine life, such as redfish, because I’m not seeing many small reds that are usually caught by my clients now. Tarpon fishing has been awful, too.”

Hildreth believes this most recent spill from the Golden Ray may similarly impact the area’s fishing just as badly in years to come, because the current spill comes at nearly the same time the ship first went over in 2019.

“It’s fair to say this is what we would call a worst-case scenario,” Himes said. “We have about 70 people dedicated to shoreline clean up, in addition to almost 30 vessels and their crews collecting oil.”

Crews have removed over 35,000 pounds of oil-soaked sand from the shorelines of nearby beaches.