A dead whale attracted a feeding school of sharks near Honolulu 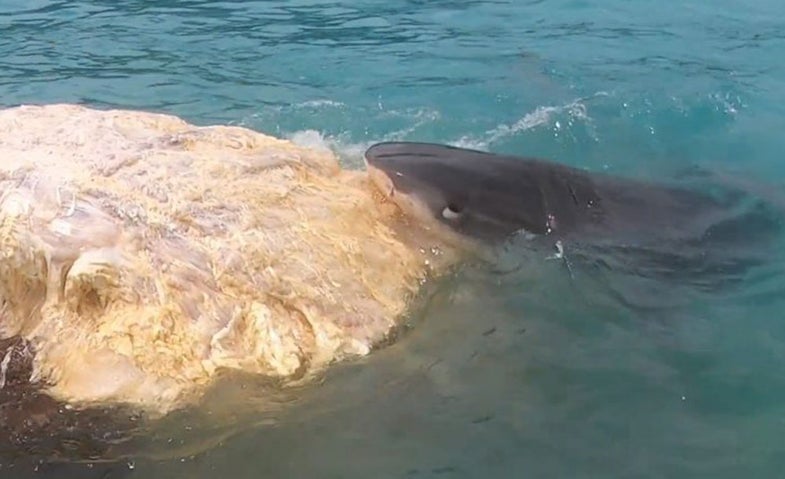 Hawaii safety officials are telling people to stay out of the water after massive tiger sharks were seen feeding on a dead whale that washed up on Oahu beach near Honolulu in the Waimanalo area, according to Hawaii News Now.

The sharks were first spotted feeding on the whale carcass as it floated dead in deeper, offshore water. The carcass then washed onto the beach and people were coming to the scene to observe the rare sight.

The beach was closed as the threat of shark activity remained high. Lt. David Loui of the Honolulu Ocean Safety Division used a jet ski to report on the shark whale-feeding behavior.

“One of the sharks, probably about 12 feet, was actively coming to the jet ski craft and almost making lunges toward it, and basically trying to scare us off,” Loui said.

The whale carcass was removed from the beach and hauled away for private land burial. Approximately 50 people participated in a traditional Hawaiian blessing of the whale, as whales are culturally important for Hawaii’s native islanders.

Dead whales and dolphins washing onto U.S. Pacific shores is rare, according to authorities, less than two dozen per year. Anytime a carcass is near shore there is a risk of predator shark encounters. In February a dead North Atlantic right whale carcass created a great white shark feeding frenzy.

A team working with Nicholas Hofmann, training coordinator of the Health and Stranding LAB at University of Hawaii, is studying the whale’s baleen to learn the cause of its death to aid in whale research.