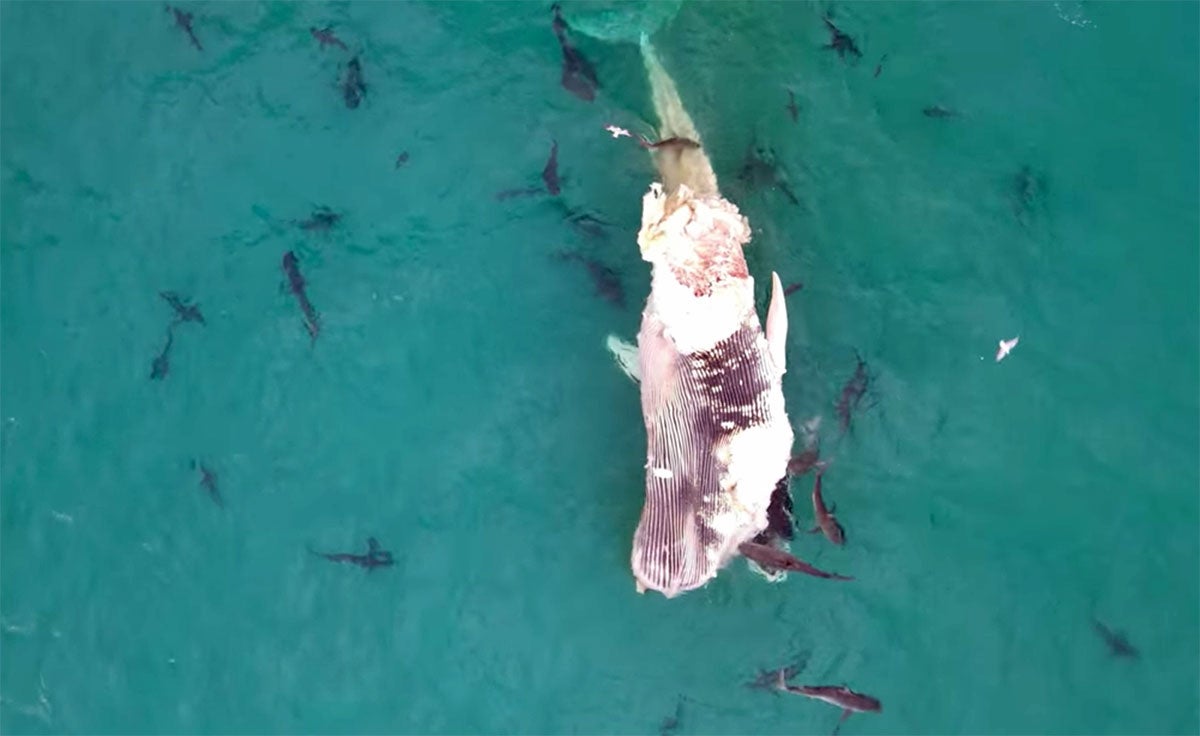 Indy Crimmins and John Cloke had been camping at Norman’s Beach near the town of Albany, Australia earlier this month when they noticed something big floating in the clear water near shore.

“I was fishing off the beach and I could see this big thing bobbing in the water with birds around it, so I flew the drone out and saw it all,” Cloke told ABC Great Southern.

The drone recorded an incredible sight of dozens of large, frenzied sharks chewing on the deteriorating remains of an estimated 50-foot-long dead humpback whale.

“At one point there’s probably about 100 sharks around the carcass,” Cloke said. “It was pretty full-on. We were in shock with just how many sharks there were surrounding it [the whale]. We couldn’t count them all.”

The presence of the dead whale near shore and abundant sharks resulted in Australian authorities posting a shark alert for the area.

The video of the shark feeding frenzy was shared on Indy Crimmins’ Facebook page and it’s gotten hundreds of thousands of views.

“It’s beautiful footage,” Taylor said. “A whale carcass is a good feeding opportunity for many different species of sharks in our coastal waters. As someone who works in the area of shark research, it’s very interesting footage but not that unusual.”

Dead whales regularly are found in Australian waters, and video and photos of shark feeding frenzies on carcasses are spellbinding and chilling to view. Particularly because so often many of the sharks are massive, including great white and tiger sharks that often exceed 1,000 pounds.

Taylor said it was difficult to determine what shark species were feeding recently on the dead whale at Norman’s Beach, but some were huge, and it’s believed great white sharks were getting in on the action. If you watch the video closely, you can spot at least one tiger shark.