A limited number of lucky hunters get to chase tundra swans in Utah each fall. But some of these licensed hunters are targeting the wrong swan species 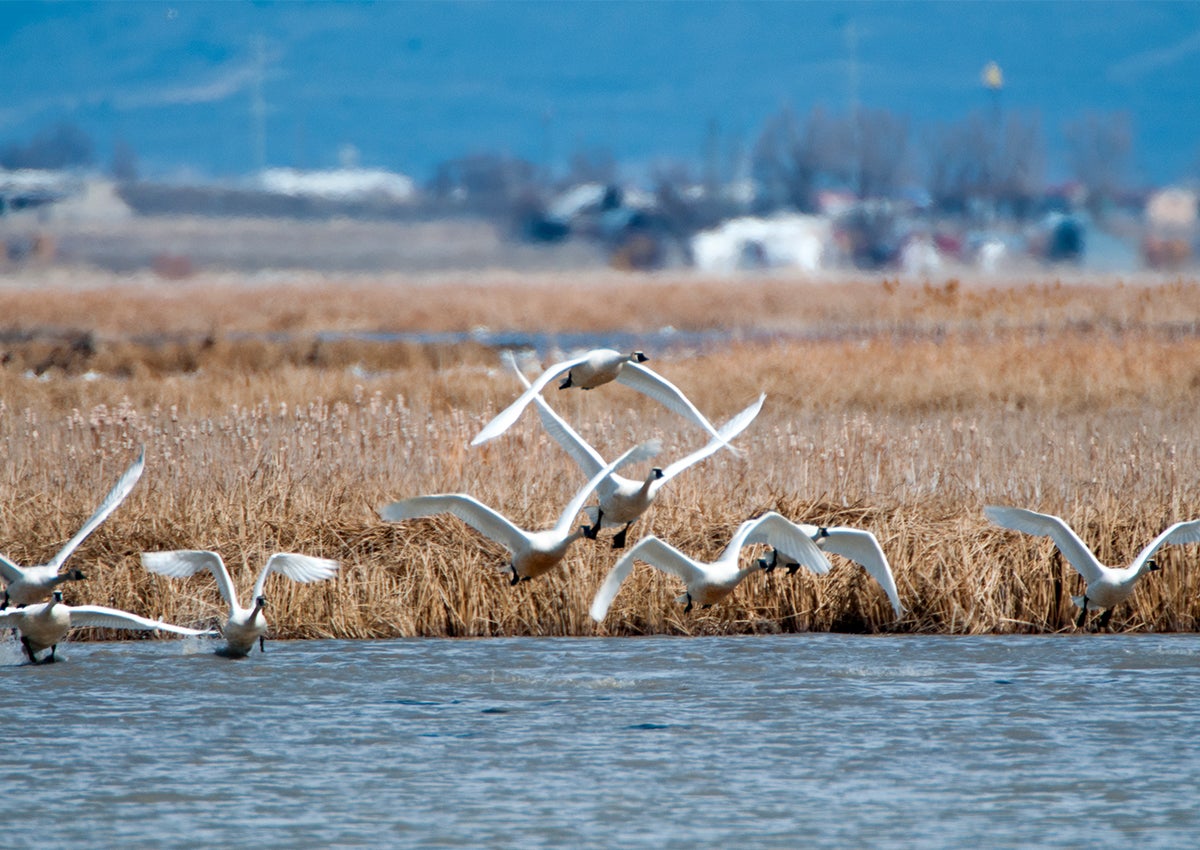 Each fall, approximately 2,750 lucky hunters have the chance to shoot a tundra swan in Utah. These hunters earn the opportunity by applying through a lottery, often waiting several years before they’re able to draw. Unfortunately, many of the hunters who draw are never able to punch their tag. This is because other hunters keep shooting the wrong swan species—perhaps intentionally.

Utah is one of only 10 states that allows tundra swan hunting, which originated in Utah as a necessary conservation effort. As the tundra swan population grew (there is now a global breeding population of approximately 280,000 tundras) it was natural to open a hunting season for them in flyways where they’re prospering.

Then there’s the trumpeter swan, which also migrates through northern Utah but in smaller numbers. Although they were removed from the Endangered Species List in 1968, trumpeters are still considered a recovering species, with their global population hovering around 63,000.

The Utah Division of Wildlife Resources actively discourages hunters from shooting trumpeter swans, which are significantly larger than tundra swans and have different markings and trumpeting calls. But hunters in Utah are still maxing out the trumpeter quota, which results in premature swan season closures.

To give allowances for mistakes and misidentification, it’s legal for 20 trumpeter swans to be harvested each year by licensed swan hunters. Once those 20 trumpeters are killed, the entire season closes, even if tundra swan hunters haven’t taken their quota of birds.

The only real penalty for a licensed hunter who harvests a trumpeter is that they cannot apply for a swan permit again for five years. But it’s the other hunters who pay the price when the entire swan season is closed early. This is the fourth consecutive year that Utah’s swan hunt was closed early due to too many trumpeter harvests.

In 2019 the trumpeter harvest cap was increased from 10 to 20 birds. Heather Talley, Upland Game and Migratory Game Bird Coordinator, explained that prior to 2019, DWR had only verified about 40 trumpeter swans harvested in Utah.

“A biological assessment was conducted that showed up to 20 trumpeter swans could be harvested in Utah without having any significant impacts on the Greater Yellowstone trumpeter swan population,” Talley says. “We increased the quota at that time to 20 because there was no biological reason to keep the quota at 10.”

There was also an influx in trumpeter swans migrating to Utah that year. Chad Yamane, Ducks Unlimited regional director in Utah, says that a hard freeze pushed birds into Utah and they saw a significant increase in trumpeters. Locals theorize that the birds imprinted on the area because they have been coming back every year since.

The increase in migrating trumpeters and the modest increase in permits are why the trumpeter quota is now met consistently every year, even though Utah hunters had previously only harvested 40 trumpeters in total. In 2019, Utah also increased the number of tundra swan permits from 2,000 to 2,750.

Swan Identification Is a Challenge

As of this year, in order to apply for a swan permit, hunters have to complete an orientation course. This is the first year that Utah has instituted an identification test in an effort to educate hunters about the difference between trumpeters and tundra swans. In theory, this sounds great. If people are unable to differentiate between tundras and swans that are twice the size and are literally trumpeting through the sky, then a short lesson is in order.

But how difficult is it really to tell the two swans apart? Yamane says that a silent single or family of trumpeters can be hard to differentiate from tundra swans. The birds’ vocalization is the most surefire way to get a positive identification unless trumpeters and tundras are flying together, making it easier to compare the two. Because it is easy to misidentify the birds, Yamane estimates that roughly 50 percent of the trumpeter swan harvest quota is taken because of honest mistakes.

Some hunters are actively targeting trumpeters, however, letting tundras fly through their spread and waiting for the taboo trophy bird. A handful of hunters who I spoke with say they know of other hunters who have specifically targeted trumpeters.

This causes division within the waterfowling community. Hunters boasting about a trumpeter harvest or their plans to hold out for one understandably anger those who want to follow the rules and hunt tundras through the full season. The swan permit system uses preference points to favor hunters applying year after year, and hunters who draw (after accumulating years of preference points) but then don’t harvest before an early closure are simply out of luck.

Yamane worries that the trumpeter quota encourages the targeting of trumpeters. Certain waterfowl hunters look at their sport as a way to collect rare birds (whether that be banded birds or unique species). And the opportunity to legally harvest a trumpeter swan is so rare that it proves irresistible to some hunters.

DWR doesn’t have any data to definitively state that trumpeters are being targeted, but they do plan to bring recommendations through the public process prior to next season. “Any hunting opportunity has the potential for sportsmen to seek some sort of trophy status in their harvest,” says Talley. “Because a limited number can be taken due to the U.S. Fish and Wildlife Service regulations, this may be the case.”

The identification course, along with the newly implemented five-year swan season ineligibility, are designed to discourage trumpeter harvests. When I asked about the effectiveness of these new efforts, however, Talley agreed that the waiting period was unsuccessful. It takes about two years to earn a permit, so a five-year waiting period just isn’t harsh enough to stop people from almost-legally shooting the largest native waterfowl in America.

Hunters are allowed 72 hours to check in their swans, so an additional trumpeter was reported this year, making 21 dead trumpeters 24 days before the original end of season. Last year there were 23 trumpeters taken. I asked Talley if she suspected that some hunters were not checking in their trumpeter swans but she said there was no evidence to suggest that. Perhaps because the penalty is so light, no one cares enough to risk an unreported bird.

After all, if you go through the trouble of intentionally shooting a protected bird in a legal manner, you’re likely going to want to bring it to a reputable taxidermist.

It’s not going to take long for anti-hunting groups to target this hunt once again, based on the fact that protected birds are being killed over quota. Back when swan hunts were implemented in Utah in the early 2000s, anti-hunting groups sued the USFWS in order to protect trumpeters.

The real detriment to the trumpeter population is our lack of information about it. The fact is, we don’t know exactly how the Utah swan season affects the Yellowstone trumpeter population. Not all of the trumpeters are migrating from there, as some come from Alaska, which has a larger population. Yamane says that what the swans (and swan hunters) really need is more research and feather isotoping studies to understand just how at risk trumpeters actually are. Until then, we’re all just guessing.

Ashley Thess is the Assistant Gear Editor for Outdoor Life, where she edits and writes gear reviews. Originally from Missouri, she now lives in Salt Lake City, Utah, where she keeps an unruly gear closet. Contact the author here.