Video: Texas Man Tries to Free a Deer Stuck in His Fence with a Pool Skimmer, Folding Chair

It took a little trial and error, but after a whitetail got wedged in their wooden privacy fence, Marco Rangel and his neighbor eventually freed the deer 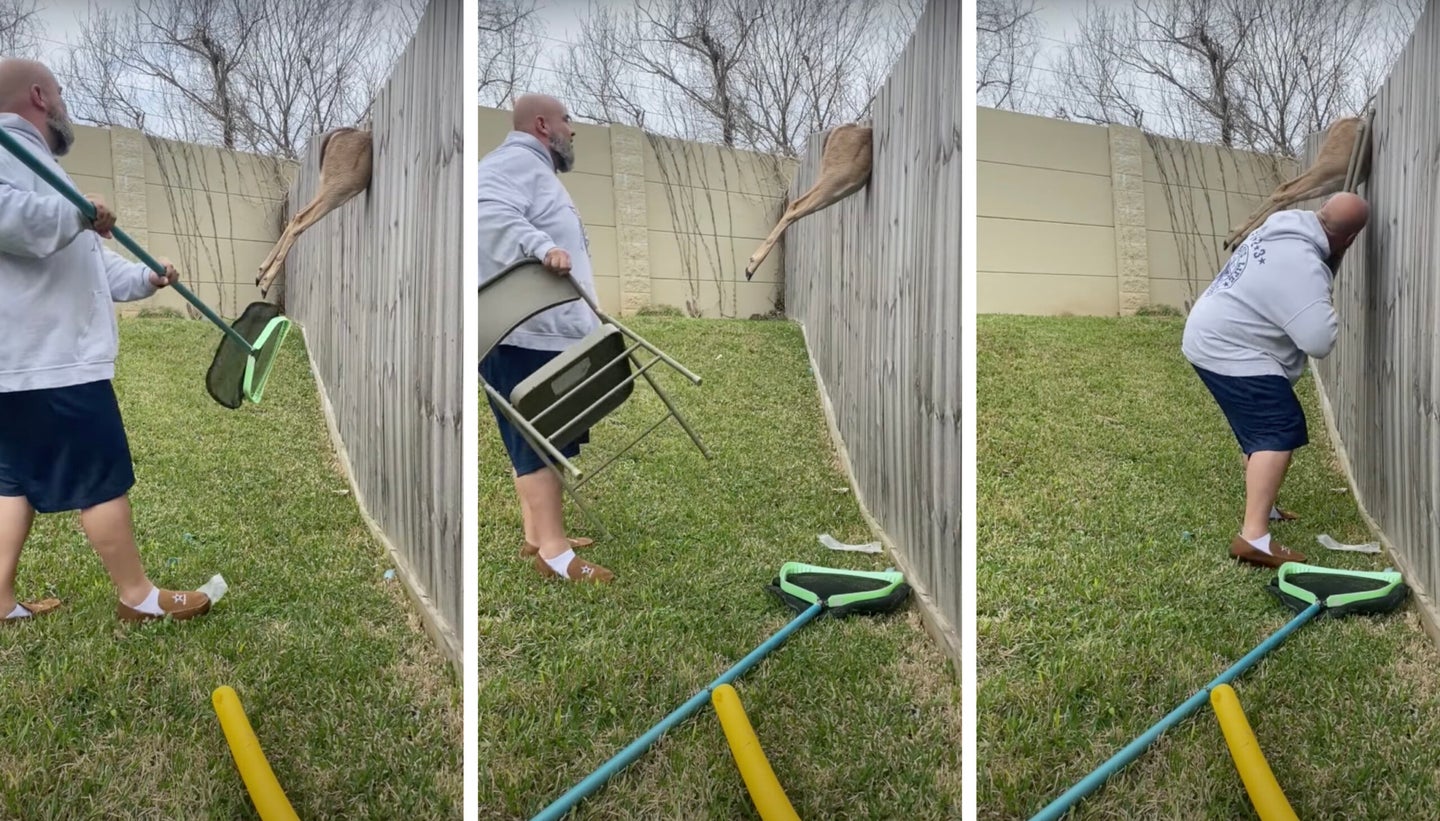 Rangel eventually had to remove a wooden slat or two in order to free the deer.
SHARE

A man living south of Houston, Texas, received an A for effort last week when he tried to free a deer that was stuck in his wooden fence using a pool skimmer and a folding chair. The failed rescue was caught on video and shared to Storyful Viral by the suburbanite himself, Marco Rangel. A separate video, recorded by Rangel’s neighbor on the other side of the fence, shows that after this bit of trial and error, the deer was eventually released unharmed.

Only the hind section of the whitetail is visible in the video, which starts with Rangel approaching the fence with a pool net in his hand. Wearing a Dallas Cowboys hoodie and matching slippers, he tries lifting the deer but can’t get enough leverage with the long-handled net to free the animal.

“I don’t know how…that thing’s heavy,” Rangel says before re-entering the frame with a new tool in-hand: a folding metal chair. But this doesn’t do the trick either.

He gets his shoulder underneath the deer and gives a couple strong lifts with the chair, but the animal stays wedged solidly in the fence. At one point, an exasperated Rangel is left staring at the deer’s derriere—which is situated right at eye-level—while his neighbor offers advice from the other side of the fence.

Although Rangel’s footage ends with the animal still wedged in the fence, a separate video taken by neighbor Ruthie Linsenbart and shared with KHOU-11 News shows the deer getting away. Linsenbardt’s footage shows Rangel removing at least one of the fence’s wooden slats. He then gives one final lift with the collapsible chair and un-jams the deer, which runs away apparently unharmed. Rangel shared KHOU-11’s story to Facebook that evening and cleared up some facts in the process.

“Real story: ‘Neighbor discovered, knocked on my door, Marco did the rest,” Rangel wrote. “If I would have discovered we would have had some good sausage and no news story.”