Catch Your Biggest Trout Ever

When the lights go out, giant trout turn on, and mouse flies are the best way to catch them 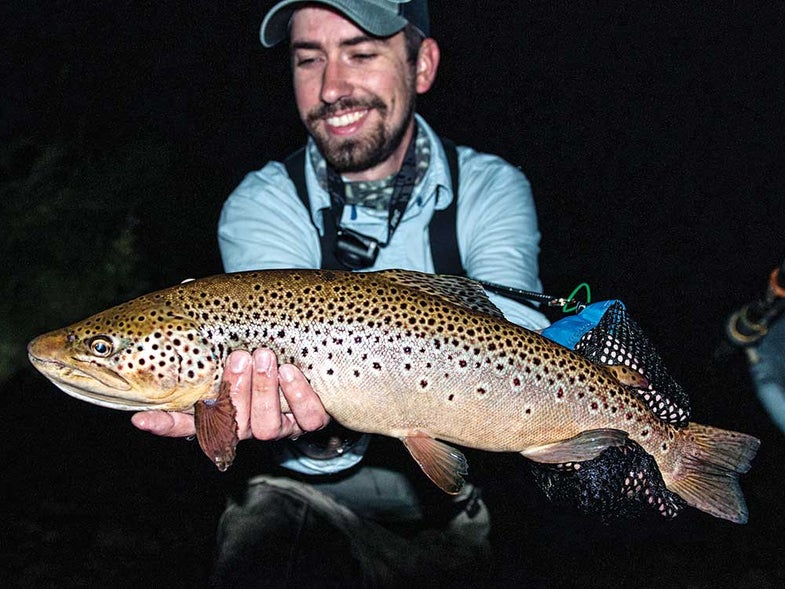 A Michigan Brown, wrestled from a moonlit riffle by Tom Hazelton--his third in an hour. David Karczynski
SHARE

I’ll never forget the first time I hunted trout at night. At the time I’d only been flyfishing for several weeks, with limited success. It didn’t help that I was fishing incredibly technical rivers—slow, gin-clear water and bright-sand bottoms made for chronically anxious fish that would scatter like buckshot the moment I got to within casting distance.

That all changed when I returned to those very same waters to fish mouse patterns after nightfall. Suddenly all those trout that saw me coming 60 feet away were banging into my kneecaps to eat a rodent, and I started to raise fish far larger than I had thought my river system could produce. If you’ve never tried mousing, you’re missing out on hands-down the best and most consistent big-fish bite of the year.

Determine Your Vermin
Mouse patterns range from large, articulated ties like Tom Lynch’s White Bellied mouse, which requires a 7- or 8-weight rod to cast, to smaller Morrish Mouse patterns that can be fished on a 5- or 6-weight. The one thing all mouse patterns have in common is that they make a wake on the surface, and it’s that wake that calls fish in. At night, you can generally get away with cutting your 9-foot leader back to 6 or 7 feet, and using a much heavier tippet, all the way up to 15-pound-test. This heavy tippet works well since fishing in the dark will make the bankside grasses and trees seem a bit grabbier than usual.

As to presentation, mousing is very similar to the quartering-downstream you might have done with wet flies and leech patterns—basically, you cast at a 45-degree angle toward the bank and let the fly swing cross-current until it’s dangling right below you. That said, there are a few key differences to fishing a mouse. The first is to land the fly with a good, hard splat. Mousing is really the only time that trout fishing calls for a full-throated smack upon touchdown—but it’s dark, after all, and you’ll need to get a trout’s attention.

What comes next is crucial: As soon as the fly lands, throw a big upstream mend so that the fly doesn’t start its swing too quickly. This gives the trout a long second to find the source of the splat. If a fly lands and immediately starts swinging cross-current, an eager trout’s ability to find your offering in the dark is compromised, especially in faster flows.

As the fly swings, alternate between small strips and small upstream mends to imitate a mouse struggling and resting in the current, while doing your best to maintain some slack in your line (a taut connection to your fly is a mousing no-no). You can achieve this by keeping your rod tip high and lowering it to follow the fly at a speed just a bit quicker than the current—you’ll know you have enough slack in your connection if your fly line forms a slightly sagging bow instead of a tight, straight link to the fly. This extra bit of slack is critical. When a trout decides to eat a mouse, it’s not expecting to encounter any resistance whatsoever.

Strike Detection
In the dark, knowing when you’ve been bit is a sonic affair, so you’ll be relying on your ears. There are two sounds to listen for. One is obvious—a toilet-bowl whoosh that will give you something just short of a heart attack. This will often come from smaller, less-experienced fish. The second sound is much subtler—a short, deep baritone bloop caused by a mature trout efficiently lifting its nose in and out of the water to eat your mouse. This sound is easy to miss, especially in fast, noisy water, so you’ll need to pay close attention. Mousing is not for dreamers.

Once you’ve been bit, the first and most important thing to do is…nothing at all. “Be a statue” was the best advice I’ve ever gotten when it comes to fishing mice in the dark. Of course, this is thousands of times easier said than done. Your instinct will be to rear back on your rod tip to set the hook immediately. Resist. Trout often miss mice on the first lunge but will search the area for their escaping prey. Keep your rod tip low and wait until you feel the weight of the fish. Then raise the rod tip upward in a swift motion and fight the fish in manual, hand-to-hand combat—there’s no need to put a moused-up fish on the reel.