Rafting, fishing, and camping through one of America's great public lands 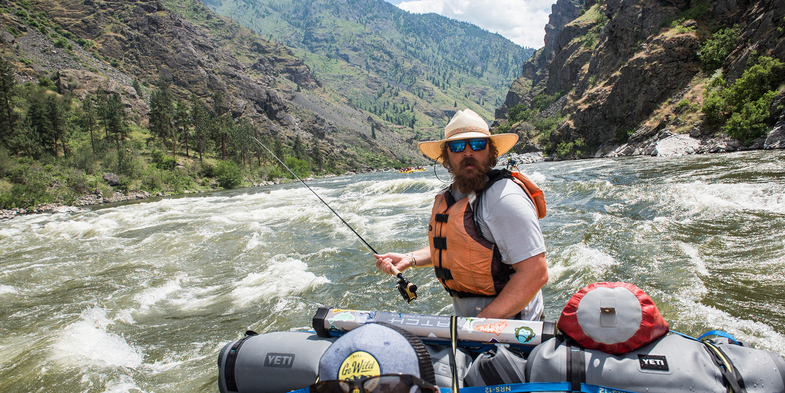 A debate over the value and management practices of federal public lands has burned hotly this summer. So hotly, in fact, that a critical point has seemingly become lost in the policy haze: public land is meant for us to enjoy.

But if anybody does know how to kick back and enjoy a little adventure on America’s public land, it’s the folks at YETI Coolers (after all, their main job is to keep beer cold) and O.A.R.S., an adventure guide company out of California. They recently hosted a group of outdoor writers and photographers on a whitewater rafting trip down the churning Snake River. The trip promised big waves, feisty smallmouth, cold beers, and gourmet cooking. The point was to test out some new YETI gear and enjoy a little piece of paradise that we all own—the Hells Canyon National Recreation Area.

Tucked along the border lines of Oregon, Washington and Idaho, the Snake rushes through the Hells Canyon—a 652,488-acre expanse of wilderness that’s managed by the U.S. Forest Service.

Once the home of the Nez Percé Tribe, the canyon holds big game like black bear, elk, and bighorn sheep and the river runs thick with smallmouth bass and the occasional sturgeon.

Our group was a mishmash of hardcore fly fishermen, skiers, surfers, and whitewater rafters. And all of us were equally excited to hit the river.

We mostly ran class II and class III rapids, but we hit two class IVs on the first full day in the raft. One of these class IVs, the Wild Sheep Rapids, gave us a run for our money. I was in the paddle boat, the heart of the action, with our guide Kale and five other’s from our crew. We hung back and waited for the dory boat to chart its course through the giant crashing waves. The big fiberglass dory would always go through first and the rafts would follow; if that thing got loose you definitely didn’t want it at the back of the line clobbering everyone in front of it. When we saw the dory slip through unscathed, we took off into our first set, and I turned on the GoPro strapped to my chest. We successfully made it through the first two sets before getting absolutely crunched by a big wave curling laterally. Our timing was off so instead of gliding over the top, the boat immediately seized and rolled over to its left, flipping some into the water and trapping others underneath the boat.

I was flung overboard and got dunked repeatedly through the rapids. Eventually I made it down to the dory boat parked on the shore below the rapids (We edited the GoPro video shorter to spare you from some of the underwater thrashing). They pulled me up unto the deck and I lay there heaving for a second before turning to our trip leader and joked, “Hey Peter…I think I drank some unfiltered water, am I gonna be okay?”