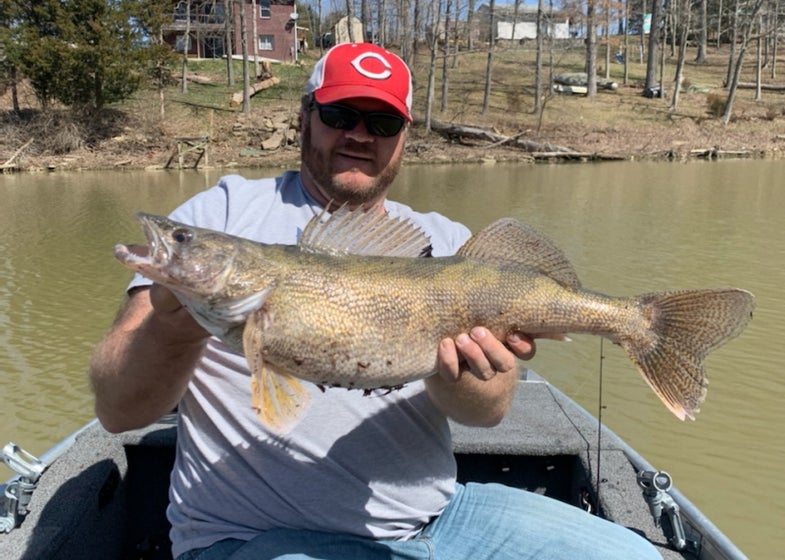 He thought the fish was likely a carp or big catfish due to its dogged fight. But then he drew it close to the boat and saw dark mottled splotches across its back and realized it was a heavyweight saugeye.

“We didn’t have a net and I have this big fish on a crappie jig with a hook designed to straighten out when hung up,” he said. “Geoffrey tried to cradle it with a PFD, but that didn’t work. I finally just wrestled it in and slung it in the boat. It was a fiasco situation for a bit.”

The huge saugeye measured 27 inches long, with a girth of 17.5 inches.

“Geoffrey looked it up on his phone and saw the Kentucky record saugeye was 8 pounds, 8 ounces,” Wolfgang said. “He told me, we might have a shot [at the state record], this might be close.”

The Kratzenbergs contacted 10 different area stores to locate a certified trade scale to officially weigh the fish. They finally convinced a Costco store to wheel their scales out onto a parking lot to weigh the fish in front of an appreciative crowd of witnesses.

It scaled 9.05 pounds, topping an 8-pound, 8-ounce saugeye caught by Clay Smith from the Cumberland River in 2019.

Read Next: The 10 Best Ways to Catch More and Bigger Walleyes

The saugeye is a naturally-occurring hybrid between walleye and sauger. They’ve been hybridized and stocked by fisheries departments to offer more target species to anglers. Saugeyes also survive well and grow faster and larger in some waters than other species.

The Kentucky fisheries department stocks saugeyes in some state waters, including Bullock Pen because they do well in small, warm lakes.

A number of Midwest and mid-South states have saugeyes, and some are found in the West, including Montana, which boasts the world-record saugeye of 15.66 pounds caught by Myron Kibler in 1995 out of Fort Peck Reservoir.