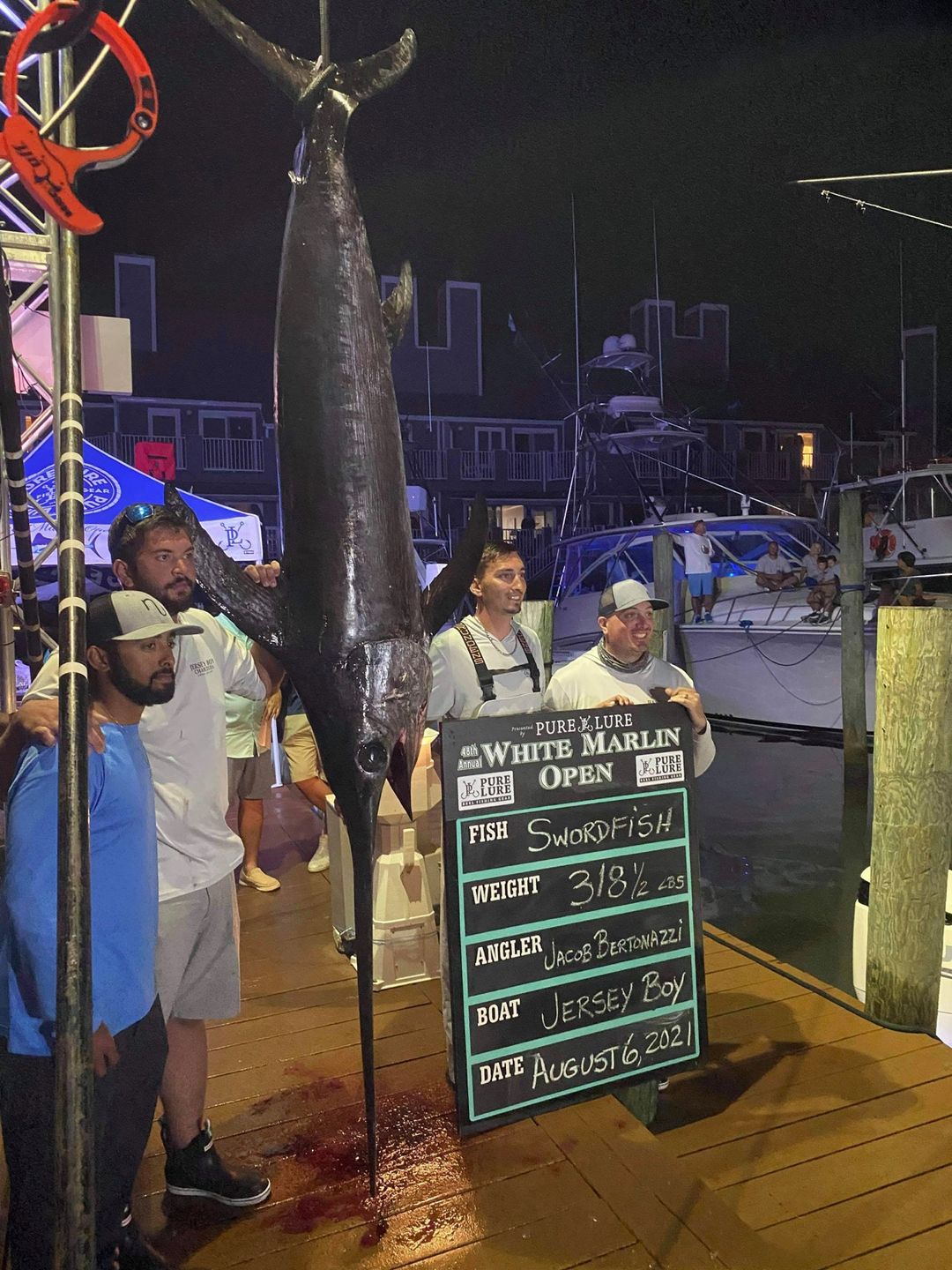 A New Jersey tournament angler is now the second officially-recognized Maryland state-record holder for swordfish in just two weeks. Jake Bertonazzi of Vineland caught the massive 318.5-pound fish in a tournament on August 6 out of Ocean City, according to the Maryland Department of Natural Resources.

Bertonazzi was fishing 60 miles offshore in an area known as Poor Man’s Canyon in the White Marlin Open tournament, aboard the Jersey Boy. He was deep-dropping with squid on a circle hook when, just minutes before the tournament ended, he landed the heavyweight swordfish.

“We were having a slow week…not having anything,” Bertonazzi told the DNR. “We had 15 minutes before the end of the tournament when [the swordfish] started taking [the bait].”

Bertonazzi battled the swordfish for almost two hours before boating it, which he called a “mind-blowing experience.” (Any fish hooked before the afternoon deadline is still eligible for entry in the tournament, according to the official rules.) The weight of the big swordfish was officially certified by the tournament weighmaster, and a DNR biologist confirmed the catch. This new state-record swordfish came just two weeks after another angler, 36-year-old Peter Schultz of Annapolis, landed a 301-pound swordfish, which was the then-largest swordfish caught off Maryland’s shore.

Schultz had also been fishing a tournament when his team hooked into the record swordfish roughly 50 miles offshore at Washington Canyon. Schultz was fishing with a dead eel on a circle hook, a Talica 50 reel with 65-pound braid line, and a 25-foot, 150-pound leader, and he and his team reeled in the swordfish after an eight-hour fight. Schultz was careful to credit the whole crew for the record catch, too.

“We put so much effort into this,” Schultz told the DNR. “Everyone had a crucial role.”

Schult’z certified swordfish has since been replaced by Bertonazzi’s, but the two record-setting swordfish were both caught while deep-dropping, a technique that’s grown more common in recent years and has resulted in more catches of large swordfish in Maryland.