After Years of Trying to Catch a Muskie, Maryland Angler Lands a New State Record

The 33-pound, 49-inch fish was caught from the upper Potomac River 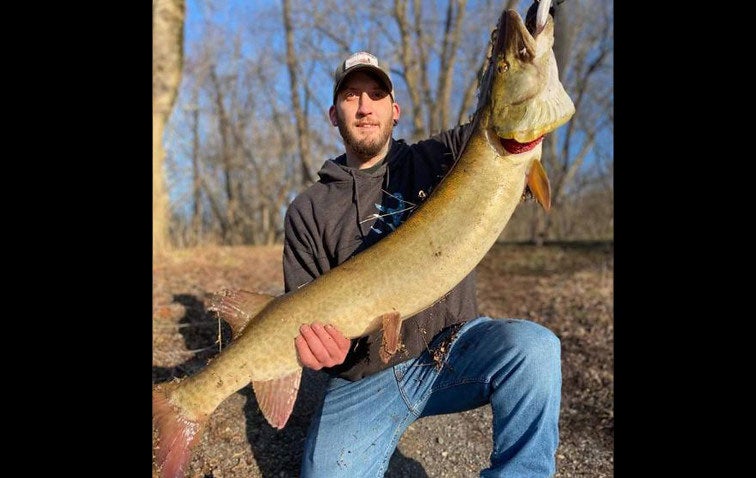 Kyle Mullenix, 32, of Hagerstown, Maryland caught a 33-pound, 49-inch muskie from the upper Potomac River that is a new state record, according to the Maryland Department of Natural Resources. Mullenix caught the muskie on March 2 and had it officially weighed and certified by the state. The catch stands as the largest muskellunge caught in the Free State. Mullenix’s muskie is the first state-certified record fish caught in Maryland this year. Mullenix says that he’d spent many years trying to catch a muskie, which is the largest freshwater gamefish species in Maryland. He was fishing with a 7-foot spinning rod and live bait when he hooked into his record catch.

“He put up a good fight, but we didn’t think it was that big until it was on the bank,” says Mullenix. “Things don’t always go as planned, but now life has gotten a lot better.”

DNR reports the fish was weighed on certified scales at Ernst County Market in Clear Spring, and it was verified by a state fisheries biologist. Scales and a bone from the muskie were requested by biologists from the taxidermist who is mounting the fish for Mullenix. They’ll use these samples to learn more about the massive muskie.
READ NEXT: West Virginia Angler Catches (and Releases) Record Muskie from Shore

Mullenix’s fish tops the previous state-record muskie, which was caught May 6, 2017 by Tessa Cosens. Her fish weighed 32.5 pounds and was 49-inches long with a 24-inch girth. Cosens’ fish also was caught from the upper Potomac River in Washington County.