Crappie Anglers Weigh in Record-Breaking Stringers (Including a 4.26-Pounder) During Grenada Lake Tournament

Records were shattered over the weekend, including the highest total fish weight and the biggest fish ever weighed at a Crappie Masters tournament 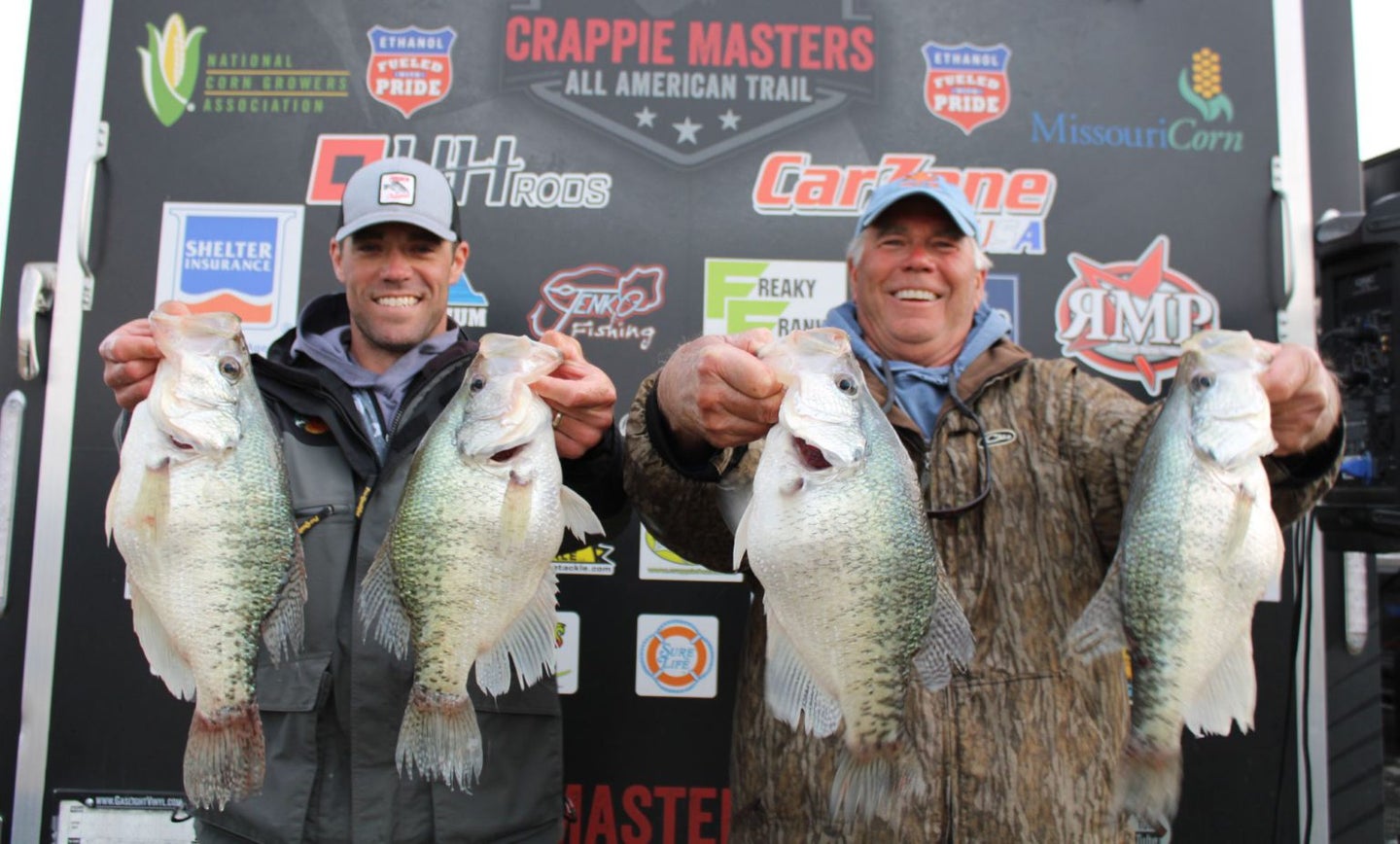 Brett and Robert Luther brought in a a 4.26-pound crappie, setting the record for the largest fish ever weighed at a Crappie Masters tournament. Crappie Masters, via Facebook
SHARE

North-central Mississippi’s 35,000-acre Grenada Lake has always been known as a top producer of big crappies, and the lake exceeded its own reputation during the Crappie Masters National Qualifier tournament that took place there on March 11 and 12. Anglers in 170 boats competed in the two-day event, with spring conditions running the gamut from balmy breezes and sunny skies to high winds and freezing temperatures. The anglers fished hard over the weekend and multiple league records were shattered in the process.

Teams took advantage of sunny and warm conditions on the first day of the tournament and brought in some heavy seven-fish limits. Multiple 4-pounders were weighed, and the top 11 teams broke 21 pounds, while the top five teams all topped 22 pounds. But the most exciting moment on Saturday was when the leading team, made up of Brett and Robert Luther, brought in a 4.26-pound monster crappie, breaking the record for the biggest fish ever weighed at a Crappie Masters tournament.

The weather turned ugly on the second day of the Grenada Lake National Qualifier, with two inches of snow falling, the wind gusting to 20 mph, and temperatures dipping into the 20s. A lot of teams struggled to fill their seven-fish limits, but the two-man team made up of Matthew and Bruce Rogers was an exception to the rule, and they “shocked the crowd with another 22-pound plus stringer,” according to a post on the Crappie Masters website.

The Rogers boys ended up taking first place and walked away the $10,000 prize, along with $500 worth of Beatdown Outdoor Products. Altogether, their 14-fish limit over two days weighed 44.71 pounds, which was 2.71 pounds more than the second-place team. More importantly, though, that weight set the league record for the highest total fish weight in a Crappie Masters tournament. The previous record of 42.84 pounds was set by anglers Zeke Anderson and Dillon Hacker during last year’s tournament on Grenada Lake.

Matthew told Crappie Masters that on day one, they were fishing a lake flat in open water when they discovered a drop-off into a ditch where bigger fish were holding in 6 to 8.5 feet of water. Noting that the crappies were moving up the lake, they maneuvered their boat to always stay ahead of the fish and noted the water temperature carefully. He said those fish moved to the outside edge of the ditch on the second day, but the overall pattern stayed consistent.

The two were fishing a 15-foot Jenko rod and a 1/4- to 3/8-ounce weight rigged with a variety of baits and minnows. One of their top producers was a purple bait with a glow blue tail that Bruce had made himself.

As Crappie Masters but it, “the team said the key to victory was confidence and fishing hard.”