The Biggest North American Catfish of All Time 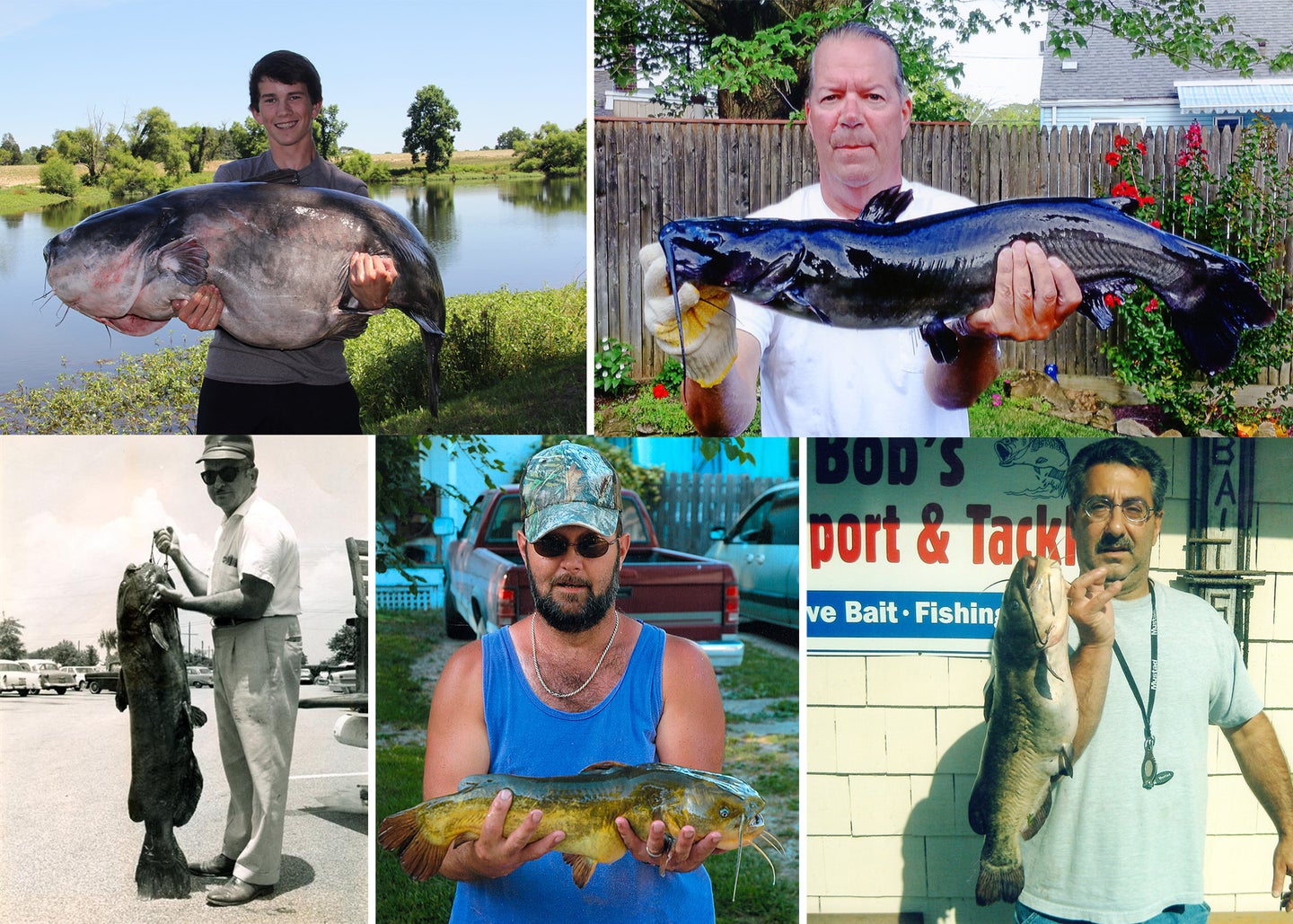 From 6 pound bullheads to 100-plus-pound blue cats, these are some of the biggest catfish caught in North America. IGFA
SHARE

If there is such a thing as an “everyman’s fish” on a worldwide scale, it would probably be the catfish. Hearty, adaptable, and non-discriminating when it comes to food, catfish have given anglers immense fun over the years. Catfish are caught on everything from live bluegills and night crawlers to “stink baits,” hot dogs, and chicken livers—to name just a few standbys. It doesn’t hurt that most species can be prepared in a variety ways for the dinner table. In the South, they’re a staple of backyard fish fries.

Bullheads are in the same family as catfish. Also prized for their taste, they’re the smaller cousins of species like blue cats and flatheads.

Here is a look at some of the biggest North American catfish ever caught, along with a few other notable catches, as recorded by the International Gamefish Association.

Richard Nicholas Anderson has the all-tackle world record with a 143-pound monster caught in Virginia’s Kerr Lake on June 18, 2011. Anderson’s fish measured 57 inches long with a portly 44-inch girth. He was fishing with a Shakespeare Ugly Stick equipped with a Daiwa reel. The line brand and weight is unspecified. He was drifting a piece of chicken when the big fish hit.

Blue catfish are native to the Mississippi, Missouri, and Ohio River systems, but they have proven to be adept predators wherever introduced, especially in Virginia and North Carolina. You can find them as far north as Minnesota and as far south as Mexico and northern Guatemala.

Blue, channel, and white cats are the only United States’ catfish species that have distinctly forked tails. Flatheads have squarish tails. Blue cats are often a blueish-gray color, while channel cats sometimes have more yellow and green, as well as spots. White catfish sometimes have a blueish-silvery look and may show a more distinct difference between the darker back and white belly.

Blue cats like clean, swift moving waters, which is one reason they do so well in tidal rivers. The biggest are often caught by marking them in a deep hole and then drifting a bait in front of their nose. Their meat is firm and white, with the younger, smaller fish (under five pounds) providing the best table fare.

Youngster Landon N. Evans hauled in his 117-pound, 8-ounce blue cat on June 11, 2016, while fishing in North Carolina’s Lake Gaston. The beast was 55 inches long with a 41-inch girth. Evans was pitching a cut shad bait using a Rapala Rod paired with a Shimano reel spooled with 30-pound Stren line.

Ken Paulie has the current all-tackle world record, with a 123-pound flathead caught May 19 1998, from Elk City Reservoir in Independence, Kansas. This flathead was 61 inches long with a 43-inch girth. Paulie was fishing with a Zebco rod and Zebco 33 reel spooled with 14-pound Trilene. He caught the fish on a live minnow.

Flatheads are native to the large rivers of the Mississippi, Missouri, and Ohio basins. They range from North Dakota to northern Mexico, covering much of the Mid-South to the Florida panhandle. They have been introduced in other waters and, like nonnative blue catfish, are thriving in several tidal rivers, such as Virginia’s James River.

Flatheads have a distinct look. Their tails are squarish rather than forked. The head is wide and appears flattened, hence the name. The lower jaw extends beyond the upper jaw. Their coloring is all over the board, from very dark in some locales to brown, olive, and yellow. Like their blue cat cousins, the biggest fish like to hang out in deep pools of hard-bottomed rivers.

W. Whaley’s 58-pound channel cat, caught July 7 1964, in South Carolina’s Santee-Cooper Reservoir, is the all-tackle world record. The fish was 47.25 inches long with a 29-inch girth. Whaley was wielding a Bronson Rod and reel rigged with Berkeley line. He caught the fish on an Atlantic Coast Bucktail.

Channel catfish are currently found in most of the United States, along with parts of southern Canada and northern Mexico. They prefer clean bottoms of sand or gravel in larger lakes and rivers. They like to eat at night in swift water. In some areas where blue cats have been introduced, the bigger blues are outcompeting the native channel cats in the main waterways.

Sometimes distinguished by their spots, male channel cats can be mostly black or dark blue on their upper body during spawning season. Occasionally, some can be light blue or silvery, resembling blue or white catfish. Channel cats are prized as solid fighters.

Russell D. Price has the all-tackle record with a 19-pound, 5-ounce white catfish caught on May 7, 2005, in Oakdale, California. The gear details associated with this record are not listed.

White catfish are popular freshwater catfish used for stocking ponds and private lakes. It is native to Atlantic coastal states from Florida to New York but, as the record illustrates, white cats have been heavily stocked from Texas to California.

These are the smallest of the four native catfish in the United States. Even though they’re called white catfish, the upper bodies can be silvery blue to bluish black. Their bellies tend to be whiter than the other species. White catfish are easily caught on live bait.

Frank Piazza holds the all-tackle world record with an 8-pound, 2-ounce black bullhead that he caught August 8, 2015, in Massapequa Lake on Long Island, New York. Piazza’s bullhead was 26.50 inches long with a 13-inch girth. He was using a St. Croix rod with a Shimano reel spooled with 10-pound Trilene. He was using bread as bait.

The black bullhead is found from southern Ontario through the Great Lakes and St. Lawrence River, south to the Gulf of Mexico. Heading west, its range expands all the way to Montana. It has also been introduced into Arizona, California, and other western states. Color, despite the bullhead naming convention, isn’t the best way to identify these fish, which can range from dark green to olive- brown, yellowish-green and more. Spawning males and very young fish are solid black.

Glenn Collacuro is the all-tackle world record holder, with a fish weighing 7 pounds, 6 ounces, caught Aug. 1 2009, in New York’s Mahopac Lake. The bullhead measured 22 inches long. Collacuro used a Quantum Snapshot rod with a Mitchell 308X reel. The line was 6-pound Trilene. He was bait fishing with a sawbellie, which is another name for an alewife.

Brown bullheads are native to southern Canada and the eastern United States on both sides of the Appalachians. They’re also a favored stocking fish and have been introduced in many locales. They like the deepest water of any bullhead species.

Their color can vary from yellow-brown or chocolate-brown to olive, gray, or bluish black with a yellow or white belly. The sides may be mottled with brown blotches. A brown bullhead’s barbels are almost always dark brown, nearly black. The meat is reddish to pink and is considered excellent eating.

John R. Irvin claims the all-tackle world record with his 6-pound, 6-ounce yellow bullhead caught May 27,2007, in Drexel, Missouri. That fish was 21 inches long. Irvin used a Shakespeare rod, Quantum reel and 6-pound Maxima line to land the fish. The record doesn’t specify the type bait he was using.

Yellow bullhead are found throughout much of the eastern and central United States, as far as western Texas. It likes weedy, shallow water.

The yellow bullhead is the only bullhead with chin barbels that are yellow, buff, or pale pink. The other species have dark chin barbels. Their tail is also more rounded than their cousins. Their meat is white or cream colored.