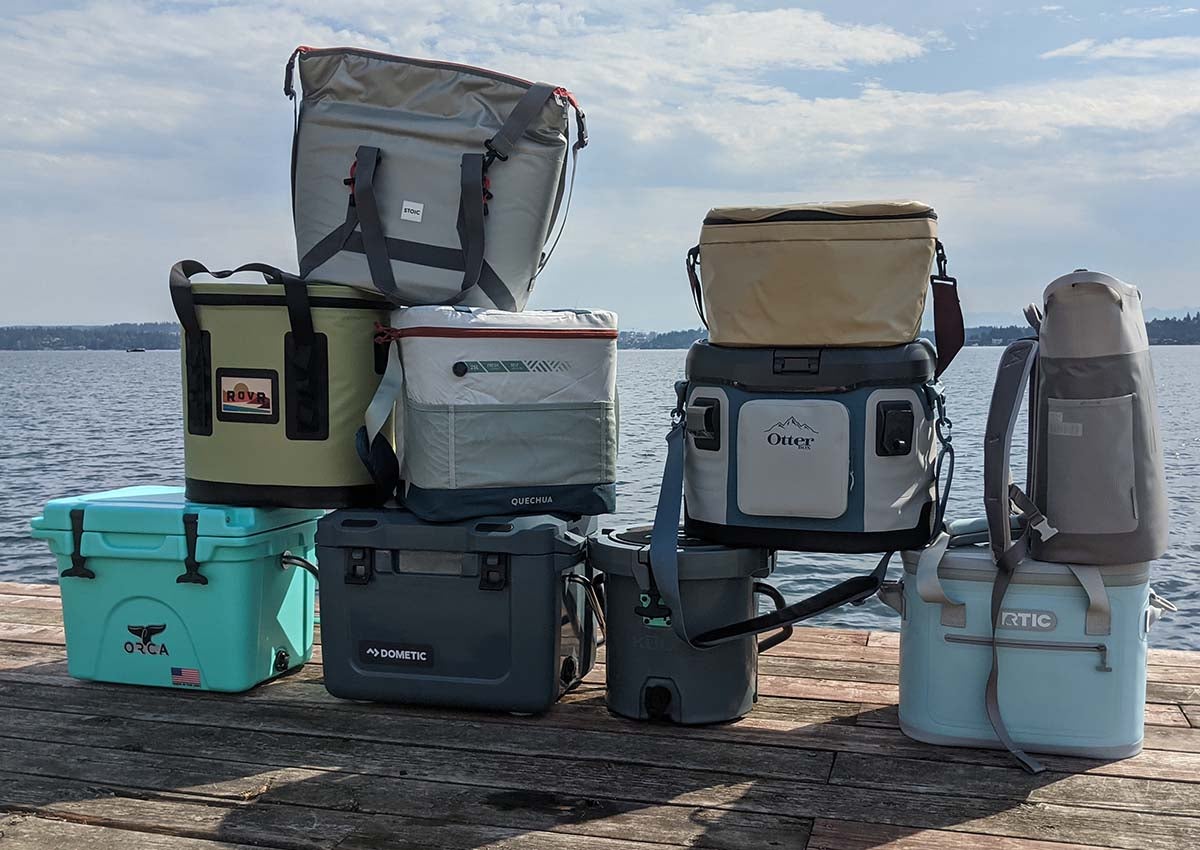 The Best Small Coolers of 2023

There are plenty of trips for which your heavy-duty camping cooler is overkill, and investing in a small cooler can help save precious cargo space in your car. But your needs for an all-day outing to the beach compared to a weekend-warrior style overnight stay at a dispersed campsite can vary considerably. After checking out ten of the most popular models from the best known brands, and scoring them on a number of criteria, I’ve settled on the best small coolers for a range of activities.

The Kula 2.5 was nearly waterproof, easy to use, and the hands-down winner of the ice retention test.

I wasn’t expecting the best small cooler test to be a bucket, but the Kula 2.5 performed so well during the ice retention, waterproofness, and usability tests that it couldn’t have been any other way. It took over 2.5 days for a bag of ice to melt in this cooler in hot, muggy conditions (70 to 80 degrees with an average of 50 percent humidity). And while other coolers that made it into day three of the ice retention test were starting to irk me with their difficult-to-use latches, the rubber toggle on the Kula was a breeze to move up and down. Its cylindrical shape made it a bit of a chore to cart around, so if you’re planning to hike in a distance before using your cooler it might be better to go with the most portable pick on this list.

In addition to a bottle opener, the Kula 2.5 also incorporated two drainage options: a classic port located unusually on the underside of the cooler and a spigot on the body, allowing this small cooler to also double as a beverage dispenser (Don’t worry; it’s made from food-grade plastic).

Great ice retention coupled with an easy-to-use latch system made this hard-sided cooler an excellent choice for someone looking to get the best bang for their buck.

The Dometic Patrol 20 looks as if someone took a regular-sized cooler and then shrunk it down until it was child-sized. There are some negatives to this—mainly that it’s pretty beefy, and thus heavy and awkward to carry even when completely empty. But the positives easily outweigh this con. Not only was the Dometic Patrol 20 one of the top performers for ice retention in my test, lasting well over 48 hours in the August heat, but it also had some of the easiest-to-use latches in my test. If you’re looking for something smaller than a traditionally sized cooler to pack up your perishables for a long weekend camping then this is a smart choice.

The OtterBox Trooper 20 balances the cold-retention capabilities of a hard-sided cooler with the convenience of a soft-sided cooler.

The OtterBox Trooper 20 is a soft-sided cooler that shares some important similarities with the hard-sided coolers in my test. First off was the lid, which is made from a heavy-duty plastic that gave the overall structure of the cooler more support than other models I tested (although, don’t be fooled by the soft foam on top—sitting on this cooler will cause it to collapse). It also had excellent ice retention capabilities, performing well beyond the other soft-sided coolers I tested and coming in within a few hours of some of the traditional hard-sided coolers I looked at.

Something I didn’t like about the Trooper 20 was its hard plastic latch. It was easily the most complicated to use in my test, with the latch tending to slip down the hook rather than go cleanly over the top. It also squeaks quite loudly, suggesting that more tension is being placed on the plastic than it is designed for. Fortunately, this was one of the few coolers I looked at that had a limited warranty in the event the latch breaks.

Other features that are unique to the Trooper 20 included a waterproof front pouch that’s large enough to store a couple of phones, battery packs, and a bottle opener. I also liked how the balance of this cooler, which is flat on one side and curved out on the other, made it less awkward to carry than the more classic rectangle design.

The lightweight, waterproof Hydro Flask Day Escape exemplifies why backpack coolers are such a popular choice.

If you’re planning to travel more than a 100 yards with your cooler, you’ll start to notice all the ways in which they are awkward to carry: sharp corners, abrasive fabrics, unbalanced loads. Backpack coolers help to mitigate these issues by adding on the strap and support structure typically used on packs for day hikes. So it was no surprise that the Hydro Flask Day Escape was the easiest to carry of any small cooler I looked at, although there are a few things that I wish had been different about its design. The straps themselves were exceptionally hard to adjust, requiring some serious yanking to get them to move at all (forget about dialing in a precise fit). The sternum strap was also located unusually high up—at its highest point, it was just below my neck and it only came down a couple of inches below that. But the light padding on the pack and straps helped to make up for the awkward parts of this backpack cooler, earning it top marks in comfort.

I also liked that the Hydro Flask Day Escape was fully waterproof, tipping easily in all directions without letting any moisture escape. Although if you work up a sweat on your day hike it’s never a bad idea to pour some of the runoff over your head.

The fully waterproof RTIC Soft Pack 30 held ice for longer than almost any other soft-sided cooler I tested and was significantly more affordably priced than other similar models.

This soft-sided cooler from RTIC checks all the boxes: waterproof, holds ice for over 36 hours, good-looking design, and reasonably priced, less than half the cost of some of the other high-end models I tested. As a bonus, it even had a waterproof pouch on one side that fit my phone (although not much else).

While the overall design of this soft cooler is aesthetically pleasing, it was a bit of a chore to cart around. The boxy shape tends to bang around against your thighs, whether you are using the haul handles or the shoulder strap. And though I appreciated how watertight the zipper of the RTIC Soft Pack 30 was, it was one of the toughest to open in my test. That being said, if you plan to use your soft cooler primarily on a boat or other stationary location, and only plan to open it a handful of times, then this is an excellent value.

Things to Consider Before Buying a Small Cooler

What small cooler is right for you depends largely on what you plan to do with it. Those looking for an easy grab-and-go option to store beverages or the best camping snacks will likely prefer the larger capacity of soft coolers while individuals that need to keep the brats chilled for an overnight camping trip should go with the better ice retention of a hard-sided cooler.

One of the biggest differentiators between the soft coolers in my test was their level of waterproofness. The RovR TravelR 30, RTIC Soft Pack 30, and Hydroflask Day Escape were all fully waterproof. No water escaped from the seams during the ice retention test, and no water leaked out the top or around the zipper when the cooler was flipped around while filled with water. As long as these three are fully zipped, you won’t need to worry about a cooler full of melted ice water tipping over in the back of your car. Of the hard-sided coolers, only the ORCA 20 Quart was fully waterproof.

Latching mechanisms need to thread a fine needle: be sufficiently airtight and watertight to prevent cold air or moisture from escaping out the seams while also being easy enough to use that you can trust friends and family (including children) to actually use it. A latch that is too difficult to pull or snap shut will inevitably be left open, reducing the overall efficiency of the cooler. In the above table, I’ve rated the functionality of each latching system to help you evaluate which cooler is right for your purposes.

Q: How much do small coolers cost?

Q: Should I get a soft-sided or hard-sided cooler?

Q: Should I get a waterproof cooler?

Whether or not you need a waterproof cooler depends on what you are using to cool it. If you are using one of the best ice packs for coolers, then it’s not essential because the amount of condensation that will come off your perishables and ice packs is negligible. However, if you plan to use ice cubes to cool your small cooler then it becomes more important. During testing I found that non-waterproof coolers tended to tip and spill quite easily. I would recommend purchasing a waterproof cooler if you plan to use ice as your primary cooling mechanism.

After testing ten products from ten different brands, I determined that the best small cooler for most people is the Kula 2.5 (or Kula 5). Despite its unusual shape, it has excellent ice-retention capabilities and functioned well across a number of other criteria. If you’d prefer a more traditional design, the Dometic Patrol 20 is an excellent hard-sided option, while the RTIC Soft Pack 30 and OtterBox Trooper 20 also won top marks for affordability and versatility respectively.

The basis for my test of the top small coolers was ice retention. To ensure as level a playing field as possible, I put one bag of store-bought ice into each of the ten coolers at the same time and then kept them in the same room. Whenever I checked the ice in one cooler to see if it had melted, I checked it in all of them. Next, I checked how watertight each cooler was, including at the drainage port (where applicable) and around the lid, by filling the cooler with water and then tipping it in a variety of directions. I also screwed and unscrewed the drainage ports multiple times to get a feel for how waterproof (or lack thereof) each was—unloading your car only to find a puddle forming underneath your tent or sleeping bags is not an experience anyone wants to have. Finally, I looked at how difficult each latching system was to operate.

I also considered the accessories provided with each cooler, how easy it was to transport or move, and the overall cost. Recommendations also took into account the size of each cooler, how easy they were to open and close, and whether they collapsed down after use (to better fit into a small or midsize car).