Elite Era: Is It the Best Carbon Bow of the Year? 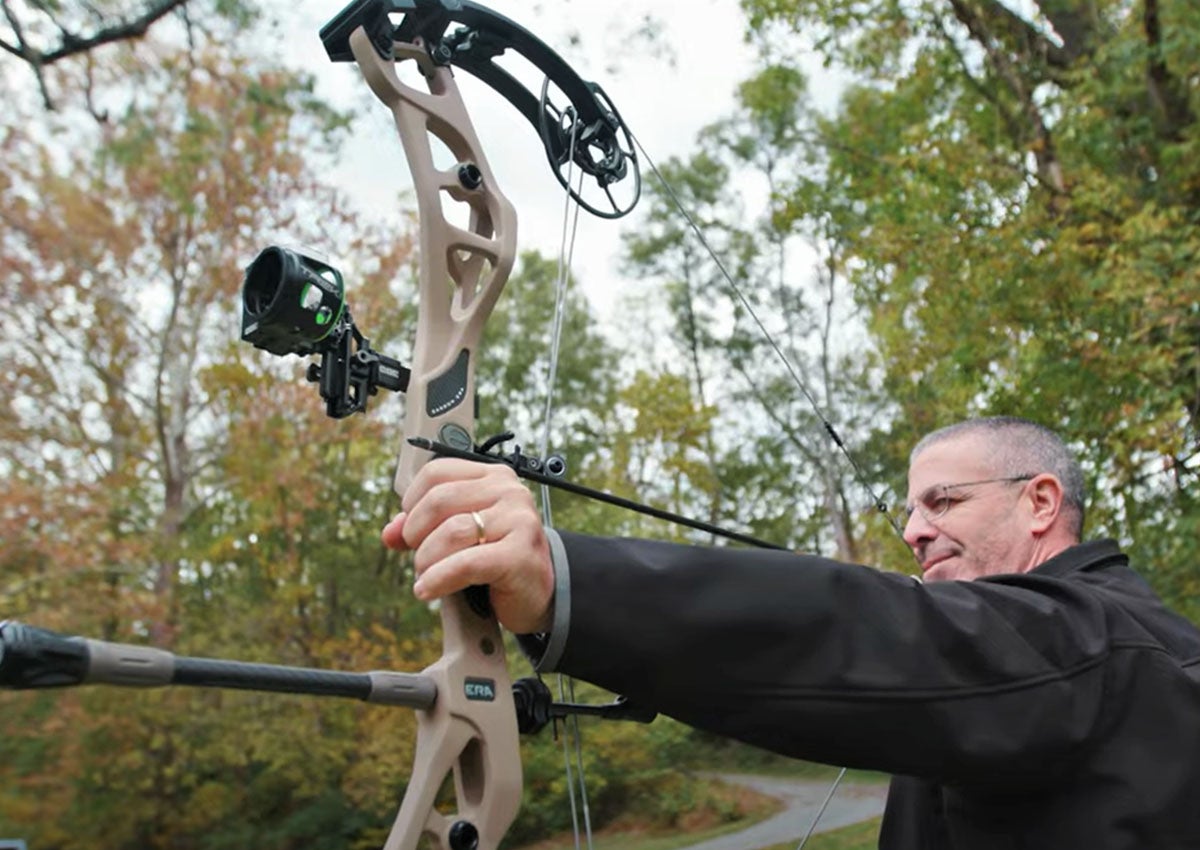 Elite Archery took the plunge for 2023 and came out with its first carbon compound bow, the Era. Two years in the making, the Era was designed to look and feel like an Elite, but with a carbon riser. Having only worked with aluminum in the past, Josh Sidebottom, Elite’s COO, and head engineer, admitted there was a learning curve to figuring out carbon.

But after making and testing multiple prototypes, the Era was born. And it delivers on Elite’s promise of “shootability” in its bows.

The Era looks like an Elite and it shoots like an Elite. And in my opinion, it sets a new standard for how carbon compounds should feel in the hand.

Elite has made aluminum bows for years. So I asked Sidebottom, why would they want to take on carbon?

“It’s something we’ve heard from a segment of our customers that they want,” Sidebottom said. “And it allows us to offer something new and different.”

Generally, hunters favor carbon for two reasons: it’s lighter and not affected by temperature to the same degree as aluminum. Aluminum bows can shoot differently when the mercury really drops, and carbon stays the same.

Several years ago, I bowhunted for muskox in the Arctic and took a carbon bow just because of the -40-degree temperatures we expected. The bow shot just like it did back home.

Also, carbon feels much warmer in the cold than aluminum does. Aluminum sucks the heat out of your hand. Carbon is a poor conductor, so it doesn’t. In fact, heat from your hand will actually keep a carbon grip warm.

The Era’s riser is created from hand-laid carbon. According to Sidebottom, this is a process where sections of carbon are set in a mold by hand. The more intricate the riser, the trickier it is to get the carbon into the mold. Since part of Elite’s goal in creating a carbon bow was to make one that looks like an Elite, that meant creating an intricate mold, featuring riser cutouts and Elite’s signature bridges above and below the grip.

“Those bridges definitely help with the rigidity of the riser,” Sidebottom said.

Sidebottom and his team played around with different types and thicknesses of carbon in different areas of the riser to get the construction and performance just right.

“It took us some time to figure it out and get the right carbon where we needed it,” he said.

Then, they had to figure out how to get Elite’s SET system onto the bow. SET stands for Simplified Exact Tuning, and it’s the unique system Elite uses for tuning.

“This was a must-have,” Sidebottom said. “We were determined to have SET on this bow.”

The way SET works is the archer turns an Allen screw attached to the top of the riser, and the limb pocket pivots to adjust the cam position. It’s an easy system to build into an aluminum riser, but carbon is different. Sidebottom said they had to embed an aluminum piece in the carbon to get SET to work the way it does on all their bows.

The power engine for the Era is the all-new SP cam that Elite introduced earlier this year on its flagship aluminum bow, Omnia. It’s a powerful cam—we’ll talk speed in just a bit—with a ton of adjustability, which is yet another Elite signature.

The SP cam utilizes a rotating module to adjust draw length from 25.5 to 31 inches. And it can be adjusted in 1/4-inch increments. That’s a killer feature for bowhunters who really like to get that draw length exactly right.

On most bows with rotating mods, adjustments are made in 1/2-inch increments. But sometimes, that’s too much of an adjustment. Archers would twist the cables to adjust the draw length in between the 1/2-inch increments. But when they do that, they change the performance of the bow. Sidebottom has long advocated that engineers like him want bows to be shot with cables at the length they’re set at the factory for peak performance.

The SP cam also features a uniquely-adjustable let-off system. The let-off on the Era can be adjusted in one-percent increments from 70-90 percent simply by turning an Allen key. Why is that a big deal? It’s another way for a bowhunter to get their bow to perform the way they want.

It’s for customization. Some bowhunters—like those who hunt out West—like a little less let-off and a little more holding weight to allow them to stay steady in windy conditions. Those hunters don’t like that 90-percent let-off an Eastern whitetail hunter might want.

The SP cam is on the aggressive side for Elite bows. That is, Elites to me always felt like they drew less than their actual weight. So a 70-pound bow might feel more like the low 60s because the draw cycle was so smooth.

That’s not the case with the SP. It’s not harsh to draw, but it feels like its weight. A bow that’s 70 pounds feels like it’s 70 pounds. With the Era, Elite eased that draw cycle a bit by raising the brace height from the Omnia to the Era. The Era’s brace is 7.25 inches, whereas the Omnia’s is 6 inches.

Now you’re probably thinking, “Oh man a 7.25-inch brace, this thing has got to be slow.” Not so. The IBO speed rating for the Era is 336 fps—only 11 fps under the Omnia. Again, we’ll talk about arrow speed here in a minute. But that brace height helps the shooting experience.

The Era’s grip is shaped just like it is on the Omnia, and the cable arm includes Elite’s LTR system (Linear Tunable Roller). This allows the rollers to be adjusted laterally for tuning purposes or to get fletching clearance when shooting large fletchings.

For this review, I borrowed an Elite Era from Lancaster Archery Supply. It was set to 70 pounds with a 30-inch draw length. From that bow, I shot a Black Eagle Spartan, 250 spine, that weighs 475 grains. Shooting through a chronograph, I got 291 fps.

And let’s talk about that for a second. I got 291 fps shooting a 475-grain arrow with a 7.25-inch brace height and 90-percent let-off. That’s pretty darn fast in my book. A bowhunter could easily hit 300 fps with an arrow weighing in the vicinity of 425 grains, and that would still be a heavy arrow. (To get the IBO speed rating, manufacturers shoot bows set to 70 pounds, with a 30-inch draw and 80-percent let-off.)

Tuning my Era was a snap. I set my center shot at 13/16 of an inch and made sure my nock height was level with the rest. My first shot through paper produced a perfect bullet hole. I backed up to 10 yards, took another shot, and got another perfect hole. I didn’t need to mess with SET.

I’ve started adding that 10-yard shot because I discovered occasional torque issues that can produce a good hole up close, but then a wicked tear at 10 yards. I did not have any torque problems with the Era. I’m pretty sure that has to do with the grip. Elite built a new grip onto the Omnia and the Era this year. It’s a little bit wider at the bottom than we’ve seen in the past. I like it. I have fairly large hands, and this wider base feels a bit more stable at full draw.

So the draw cycle on the Era is similar to the Omnia, but that 7.25-inch brace helps the Era a bit as compared to the Omnia when it comes to drawing the bow. The SP cam is built for speed, and manufacturers have to sacrifice some smoothness when they go for speed. The speed has to come from somewhere.

But that extra 1.25 inches of brace on the Era minimizes the length of the initial effort in the draw cycle. It’s not quite as harsh a draw as the Omnia. I wouldn’t describe the draw cycle on either bow as “harsh,” but compared to one another, the Omnia’s cycle is harsher than the Era’s.

I’ve been testing carbon bows for about a decade now. In the beginning, the bows about jumped out of my hand at the shot. I shoot with a very loose bow hand and if I didn’t wear a wrist sling, it was possible I might drop the bow at the shot. Manufacturers making carbon bows have been improving the hand shock these bows produced in the years since. The feel is nowhere near what it used to be.

When I took my first shot from the Era, I was astounded. Just to double check what I felt, I quickly took a second shot. Same thing.

The hand shock produced by the Elite Era is as slight as I’ve felt in any carbon bow. I believe this is the new standard for how a carbon bow can feel at the shot. There is a little thump, but the bow sat still in my hand. It felt as close to aluminum as I’ve ever felt a carbon bow.

Why is that important? Hand shock creates anticipation. When you know a bow is going to jump after you release the string, your brain starts to prepare for that before you release it. That can cause all kinds of problems with aiming and punching the trigger.

What you want is to be relaxed at full draw. Then you slowly squeeze through the trigger, while holding the bow rock steady. And when your brain isn’t worried about what’s going to happen after the shot, the string usually releases cleanly, and the arrow hits behind your sight pin. For me, that’s precisely what happened when I shot the Era.

Personally, I prefer bows that are 33 to 35-inches axle-to-axle. The Era is a bit under that, but I was able to hold it steady at full draw. With the size of the SP cam, the string angle makes this bow shoot bigger than 31.25 inches.

Because I could hold the bow steady and it didn’t jump out of my hand, I could pack the arrows into the middle from 20-50 yards. This bow is a tack driver.

Where the Era Is Lacking

Cost. Unfortunately, carbon bows where the carbon is hand laid are expensive. That’s the nature of the beast. And even though the MSRP for the Era is $100 less than most carbon bows, it’s still above $1,500. That’s going to put it out of reach for a lot of bowhunters who just can’t justify that cost for a bare bow.

Where the Era Excels

The shot. I personally haven’t shot a carbon bow that feels this quiet in the hand. Last year, I said the PSE Levitate changed my expectation of what a carbon bow should feel like. Well, with this bow Elite raised the bar, in my opinion.

Carbon bows have been around for years, but Elite Archery wanted to ensure that when they finally got into the market, they offered a bow identifiable as an Elite. They did that with the Era. This bow looks, feels, and shoots like an Elite. You never know how a bow will feel in your hands until you actually get it in your hands. If you’ve been thinking about taking the carbon-bow plunge, the Era is one you’ll want to shoot to see if it fits your taste.