You might not have heard of the Darton Spectra E, but you should give it a shot 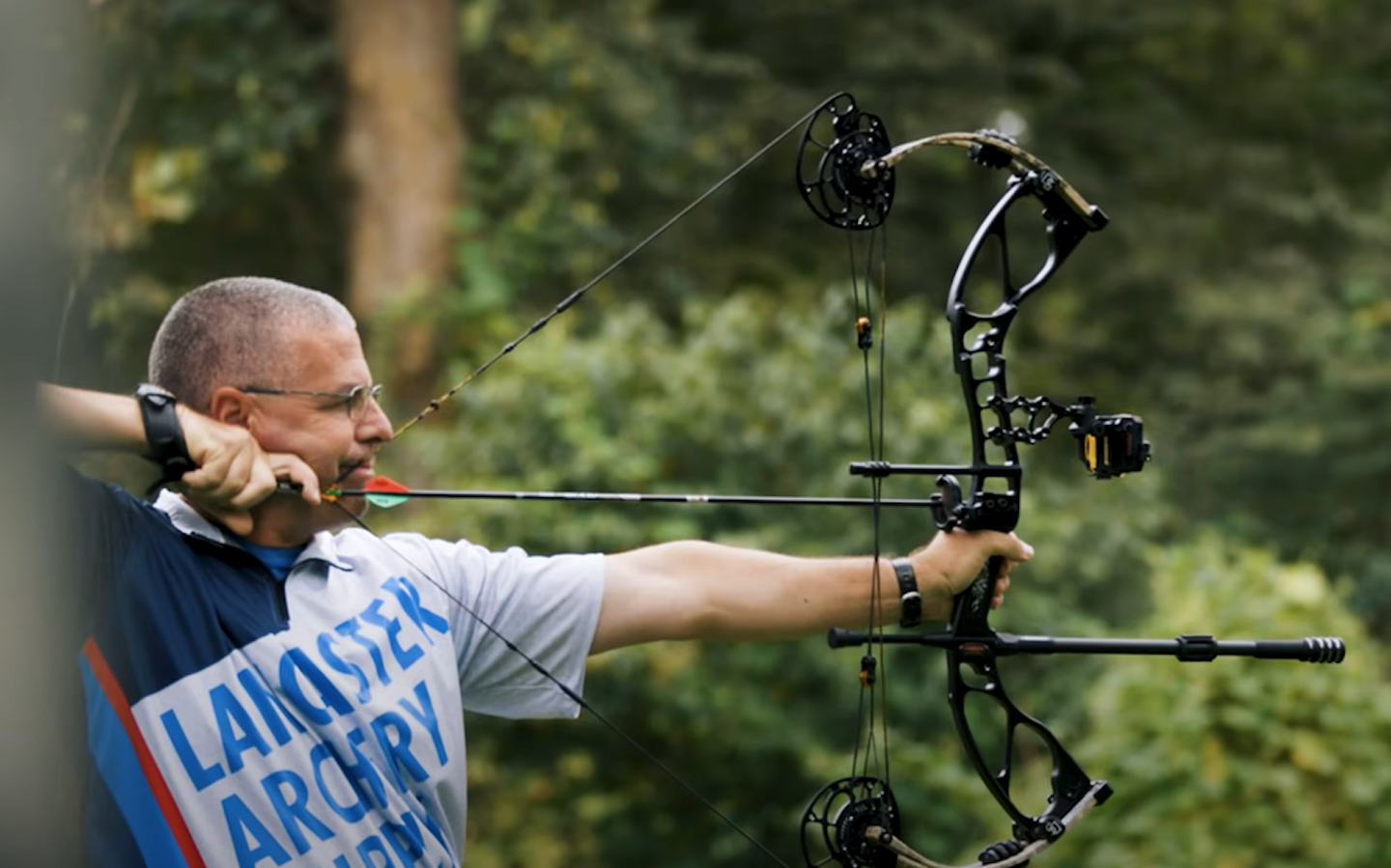 It may not be a household name, but Darton's Spectra-E is a top-tier bow. PJ Reilly
SHARE

Unless you’re an industry gadfly or you’re over the age of 45, you’re probably not too familiar with the name Darton. And even if you know the Darton name, you probably haven’t heard much—if anything—about the Darton Spectra E bow.

And that’s a shame, because the Spectra-E is a sweet-shooting compound bow that can hold its own with any of the new flagship hunting bows. It just doesn’t have the name recognition.

The History of Darton Archery

Before we dive into the features and capabilities of the Darton Spectra E, let’s talk archery history. If you shot hunting compound bows in the 1980s and 1990s, then you know the Darton Archery name well. Darton was one of the most common brands on the shelf. Former owner Rex Darlington helped shape the compound bow as we know it today.

Every compound bow you see in pro shops across the country has either a part patented by Darlington or a part inspired by a Darlington patent—especially in the cams. The three-track, binary cam system we see increasing in popularity today was first patented by Darton back in 2003.

And while Darlington helped fuel the speed craze of the early to mid-2000s with his engineering, Darton got caught on the wrong side of the marketing avalanche that boosted bow makers like Mathews and Hoyt. It might seem like Darton bows disappeared, but they didn’t.

In 2020, Randy Kitts, who owns Black Eagle Arrows and Conquest Stabilizers, decided to add a bow to his archery portfolio and acquired Darton from Darlington. Don’t worry. Darlington still works for the company doing what he loves—tinkering with new designs. But Kitts is now breathing new life into the Darton brand in hopes of bringing it back to market relevance. There’s no questioning the engineering. What Darton needs now is the name recognition it had 30 years ago.

The 2022 Spectra E is a revised version of a bow of the same name Darton built in 2021. I didn’t like the 2021 version because it had too much hand shock. Although they kept the same name, Kitts and Darlington overhauled the bow and came back with a new version for 2022.

The backbone of the Spectra E is the aluminum riser. It’s made of a grade of aluminum classified as 7075 T-6511. Those numbers and letters are Greek to most of us, but it has one of the highest strength-to-weight ratios and stiffness-to-weight ratios on the market. It’s also pre-stressed and pre-stretched.

All of that adds up to a riser that has very little flex. And that leads to consistency from shot to shot, and minimal vibration—that hand shock I didn’t like about the previous version.

In making the new Spectra E, Darton also built a wider limb pocket filled with wider limbs, and they flattened those limbs to make them more parallel. The more vertical limbs are on a compound bow, the more hand shock the shooter feels.

What’s unique about the Spectra E—something you won’t see on any other compound—is Darton’s E system. It’s a roller at the upper end of the cables that takes a split yoke attached to each limb tip and connects that cable back to the cam in between the yokes.

Normally when you see split yokes on a compound, the yokes come together below the top cam or above the bottom cam to form a single cable that attaches to the opposite cam. With the E system, the yokes form that single cable, but it’s then turned around through the roller to connect right back to the cam in between those yokes. A cable is then connected to the other end of the roller, and that cable is attached to the opposite cam as usual.

Essentially, the E system evens out the pressure on each axle. Instead of simply having the two yokes pulling down on the outside of each limb, there’s also a cable attached to the cam at the axle. So there are three points of contact pulling down on each axle, creating more stability and consistency.

On the cams, the Darton Spectra E offers two draw stops—a cable stop and a limb stop. The shooter gets to decide whether to use one or the other, or both. The cable stop is somewhat unique among bows that have such stops. It’s a flat pad, rather than a normal, round post. And that flat pad creates a solid back wall at full draw, almost as solid as the limb stop.

The back wall is critical to all archers, but I believe to bowhunters especially. When aiming at a big buck, elk, or whatever you’re hunting, it’s easy to get distracted from the shooting process. When you have a bow with a spongy back wall, it’s easy for your release arm to creep forward a bit without knowing it. That can affect your point of impact at the shot. When the back wall is solid, it’s easy to find and hold it totally by feel.

I borrowed a Spectra E from the Lancaster Archery Supply Pro Shop for my test. It was set with a 29.5-inch draw length and a draw weight of 70 pounds. With those specs, my bow shot a 475-grain arrow at 284 feet per second through the LAS chronograph. It’s not the fastest compound bow, but it’s respectable speed for how nice the bow shoots.

The bow shot beautifully. I simply eyeballed my center shot to set it up, and it produced a perfect bullet hole through paper on my first shot.

The draw cycle is nice, although it does feel a bit different from other bows. The initial pull is easy, and then there’s a slight hump right before the cam rolls over. That’s where the most significant effort is required by the shooter. As I said, it’s not a difficult cycle. It’s just different from most other flagship compounds.

The rollers employed by the E system are smooth as glass. I say that because I didn’t notice they were part of the draw cycle. I thought I’d feel some stuttering as the cables moved through the rollers, but I didn’t. I didn’t feel anything that indicated something different happened with the cables when the cams rolled over, as they do on every compound bow.

The grip on the Spectra E is an interesting feature. When I looked at the grip, I thought it looked blocky. When I carried the bow by the grip, it felt blocky. However, when I set the grip in my hand to shoot the bow, the grip felt sweet. It settled into my hand perfectly, and it felt super stable through the entire shot process.

That was an important reminder that looks aren’t everything. Performance is what counts in my book.

The Spectra E is on the heavy side when it comes to 32-inch-long hunting compounds. It weighs 4.9 pounds. By comparison, the Mathews V3X 33 weighs 4.6 pounds, the Hoyt Ventum Pro 33 weighs 4.7 pounds, and the Bowtech SR 350 weighs 4.4 pounds. And all of those bows are an inch longer than the Darton Spectr -E.

If bow weight is a concern, that might be an issue. I’m primarily a tree stand whitetail hunter, and I always add weight to my bows by putting on front and rear stabilizers. A couple of extra ounces in the bow’s weight just means I can leave a few off my stabilizers. So the weight of the Spectra E didn’t bother me.

The best part of the Spectra E is it absolutely drives tacks. The accuracy I was able to get from this bow astounded me. I busted nocks and tore off vanes several times on arrows stuck in the target that I then hit with the following shots. That’s evidence of shot consistency.

Nothing is more frustrating than having one arrow hit one spot and the next hit 3 inches away while aiming at the same spot and executing another good shot. The sound of arrows cracking one another in the center of a target is the sound of victory.

The valley and back wall on this bow are exceptional. With a deep valley and 85-percent let-off, the Spectra E is one of those bows that feels like you have to push forward on the string at full draw in order to let down. I could hold at full draw against that back wall for days.

And I had the bow set just for the cable stop to make contact at full draw. The flat paddle on the stop felt great, and I didn’t see a need for the limb stop.

Where the Darton Spectra E Is Lacking

Name recognition. There’s just no getting around that. If a pro shop carries Darton, Hoyt, Mathews, and other well-known brands, most customers are going to follow the marketing. The E-system makes this bow look different, and that might turn off some customers. Not everyone is going to appreciate the engineering behind it. They’re going to pass on it simply because it doesn’t look like a Mathews, Hoyt, or Bowtech. And it’s heavier than other bows. Some bowhunters are going to pick it up and say, “That’s heavy.” Also, the Spectra E’s finish and graphics aren’t as refined and modern-looking as those on other top flagships. In other words, it simply doesn’t look as trendy as the bows that Mathews or Hoyt roll out.

Where the Darton Spectra E Excels

The shooting experience is as good as anything on the market. And the bow is deadly accurate. Based on what the Darton folks told me, I have to think that a super stiff riser plays a big role in both. There’s barely any vibration and the consistency from shot to shot is easy to see when you’re smacking arrows in the target.

Also, the bow is forgiving. I consider myself to be a decently accurate but greatly aware archer. That is, I don’t always produce the best shots from shot to shot. But I am very aware when I make a mistake in my form. I could make mistakes with this bow, but the arrows still impacted where I wanted. That’s a great feature.

With bows like the Spectra E, there’s no reason that Darton shouldn’t be a relevant bow manufacturer from a product standpoint. Now it’s up to the company to develop a marketing strategy that will tell the world about its bows.