Recurve vs. Compound Bow: The Differences in Performance, Design, and Shooting Style

The basic differences and similarities between compound bows and traditional bows 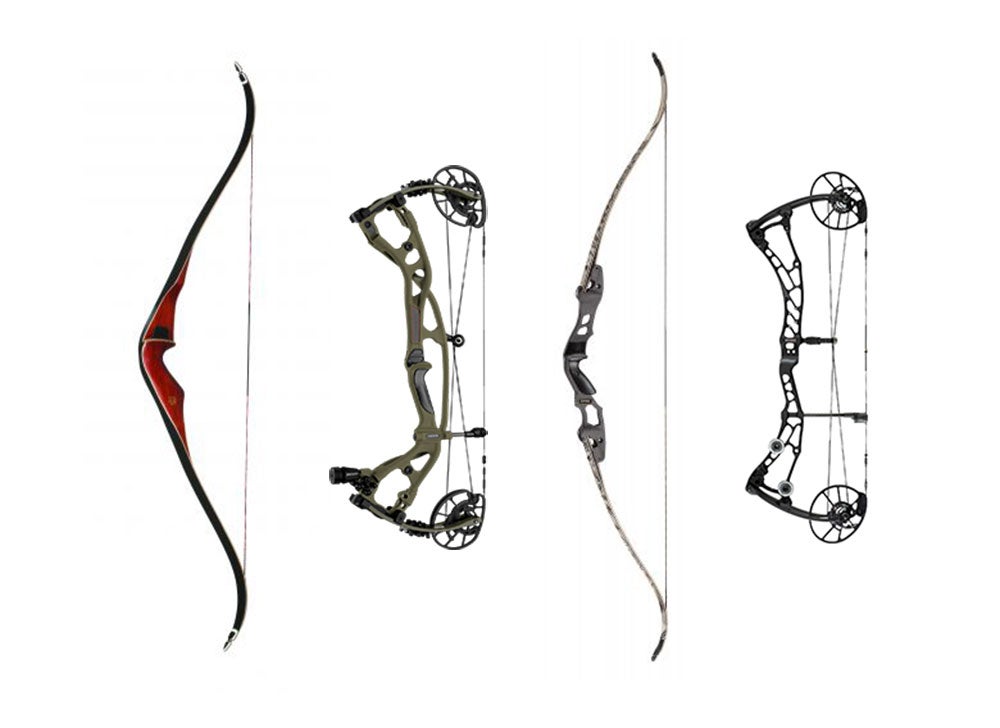 If you’re new to the world of archery, you’ll quickly discover that the gear can get pretty complicated—and confusing. This realization will probably hit right about the time you’re trying to buy your first bow. You’ll find that the harder you look, the more intricacies you’ll see. From bow models, draw lengths, and draw weights, to rests, sights, releases, arrows, and other accessories, it can all seem overwhelming. But don’t worry, there are a lot of details that you don’t need to get bogged down with immediately. However, one thing you’ll likely notice at any local archery shop is that there are different styles of bows. There are multiple sub-categories, but in general, they are usually broken down into two main categories; compound and traditional bows. Today, compound bows and their technology are as popular as ever, but there has also been a resurgence of interest in traditional bows in recent years. Here’s an overview of the basic differences and similarities between compounds vs. recurve bows (and longbows), how they work, their advantages or disadvantages, and how to shoot them.

For starters, we need to know how these two categories of bows are defined and the characteristics that differentiate them. At its most basic definition, a traditional bow is one that has a single string between two limbs -the limbs are the part of the bow that bends when the string is pulled. It’s typically shot without any sights by pulling the string back with your fingers. It’s a tool that is thousands of years old, and its effectiveness has stood the test of time. This is the kind of bow you watched Robin Hood shoot. The two largest subdivisions of traditional bows are longbows and recurves. The main difference between the two is the design of the limbs. On a longbow, the string only touches the limbs at the very tip at the string grooves, forming a “D” shape. Recurve bows have a distinctive hook at the end of their limbs and the string rests on a portion of the belly of the limb.

Both recurve bows and longbows store energy in the limb when the string is drawn back, then propel the arrow forward when the string is released and the limbs snap forward. The farther the bow is drawn back, the heavier the draw weight becomes, and the more energy is stored in the limbs. How smooth a particular bow feels varies dramatically depending on its length and design, as well as the stature of the shooter.

The shooter must put all that energy into the limbs by drawing the bow. However, cams and more efficient design give an added mechanical advantage, allowing the shooter to pull more draw weight than with a recurve bow. The shooter still has to pull that heavy weight back, but they get more performance for equal effort. Plus, at a certain point in the draw cycle, the cams provide “let-off.” Let-off is when the shooter pulls the string beyond the peak draw weight, at this point, the cams make it easier to keep pulling the string.

READ NEXT: How to Draw a Compound Bow

This also makes it much easier to hold back. For example, if you’re shooting a 70-pound compound bow, you might only be holding back 15 pounds once you are at full draw. Whereas with a 70-pound recurve or longbow, you’ll be holding all 70 pounds at full draw. This is the primary advantage of compounds, making it much easier to hold longer at full draw and aim more precisely. You’ll also find that compounds have a specific maximum draw length that must be set for the shooter. The overall design of a compound is more efficient as well, putting more of the imparted energy into the arrow as it is released. Adding to their precision, most compounds are used with sights and a release aid that clips onto a loop on the string. The release is used to draw the bow and release the string (your fingers don’t touch the string).

What a bow is made out of has a huge affect on both its performance and durability. You may be surprised to find that many contemporary traditional bows use similar materials to compound bows. Traditional bows feature a much wider range of styles and designs, so naturally, there is a wider variation in materials used. Many folks who shoot traditional bows end up gravitating toward a particular design and material that suits their style and taste. But, these styles range from self-bows (made from only wood), to laminated bows, which are made from strips of material that are pressed and glued together. Laminated bows are most common, and they can be made completely of wood, but most use fiberglass or carbon fiber to add strength, durability, and performance. Some manufacturers even use synthetic materials like G10 in the bows to increase durability. Bows with machined aluminum risers and carbon limbs are on the most technologically advanced end. There are even 100 percent carbon-fiber risers available. Most commonly, you’ll find risers and limbs with the “ILF” denotation, which stands for “international limb fitting” and is a standardized fit across a variety of brands.

Although in their early days, compounds were also made of materials like wood and laminated fiberglass, their materials have advanced significantly. Most compound risers are made of aluminum, carefully designed with cutouts that reduce weight, but maintain strength. There are also bows with risers entirely made of carbon fiber, which makes them lighter than aluminum bows. Unlike traditional bows, you’ll likely never see wood in any modern compound’s construction, but the carbon, fiberglass, and composites used to make their limbs aren’t entirely different than what you’ll find in a recurve or longbow limb.

Where the technology of a compound bow really begins to shine is in performance. Their efficiency and mechanical advantage allow them to impart much more energy into an arrow than an equivalent draw-weight traditional bow. There are different ways to quantify the results of that increased energy, all being factors of the mass weight of the arrow, and how fast it comes out of the bow. In a nutshell, the same arrow will be shot much faster out of a modern compound than a modern traditional bow of the same draw weight. Just how fast depends on several factors, but many compounds are capable of shooting over 300 feet per second with a relatively light arrow, whereas anything over 200 fps out of a traditional bow is considered blazing. Utilizing heavy-weight hunting arrows, a more realistic average for most setups might be 280 fps for a compound and in the neighborhood of 170 or 180 fps for a traditional bow (this is just a general estimate and depends on many factors).

All the praise of compound bow technology isn’t to say that more arrow speed is always better, or that some traditional bow designs don’t perform better than others. There are constant developments in limb design, and many modern recurve and longbow limbs shoot faster and harder pound-for-pound than ever before. Ultimately, nobody who gravitates to traditional archery does it to get a raw increase in performance over a compound bow—when it comes to harnessing energy and putting it into an arrow, compound bows have the advantage. However, aside from direct performance advantages, many shooters find that traditional bows give them some practical advantages over compounds, especially when shot distances are shorter. For all their accuracy-increasing advantages like sights and release aids, compounds can take a little longer to draw and aim than a recurve or longbow. Another indirect performance-related issue is maintenance. With a much more complex design, a compound typically has a lot more that can go wrong with it in the field than a traditional bow, and problems can be much more difficult to fix.

Shooting a compound and traditional bow share the same core principals of good form and a repeatable shot. There are different nuanced styles of shooting in all disciplines, but at its most basic, the goal is this: Being able to repeat the same position for each and every shot. Many of the basics like good alignment, shoulder and bow-arm position, and repeatable head position aren’t that different between compound bows and traditional bows.

The big differences in shooting technique between compounds and traditional bows are caused by the let-off of a compound, the use of sights, and the use of a release aid. Looking at the average shooter, you’ll see a slightly different looking draw, as a compound shooter rolls over the peak draw weight, then settles into an anchor and aims. A traditional bow will give you a smoother-appearing draw because it gradually increases in weight as you pull it back. Also, most traditional archers aim and release the arrow much more quickly than the average compound shooter. A compound’s sights make for a very precise method of aiming, and although there are a variety of sights, they all are aimed in pretty much the same manner. Traditional archers tend to employ a wide-variety of aiming methods. Aiming styles vary from an archery simply looking at the spot that they want to hit, called “instinctive,” to “gap shooting,” which uses the tip of the arrow to aim a set distance below the target.

The use of release aids with compounds has a big impact on their precision and user-friendliness because it helps to reduce the variability of pressure on the string and gives a crisper release than shooting with your fingers. Several styles of release aids are available, but their key advantage is removing the variability of shooting with your fingers. For a traditional archer, shooting with fingers consistently and accurately will take lots of practice, and ideally, some good instruction.

READ NEXT: How to Shoot a Traditional Bow

Regardless of which style of bow you decide to go with, lots of practice and plenty of patience are the keys to success. And in a few years, you might find yourself with a closet full of compound bows, recurve bows, and a longbow or two.